VIDEO: Get Me Howl Of Here! Pup Saved After Five Days Trapped By Jungle Landslide

Rescuers hacked their way through a snake-infested rainforest to find the pooch who was howling for help.
By Georgina Jadikovskaall July 20, 2021
Facebook
Twitter
Linkedin
Email 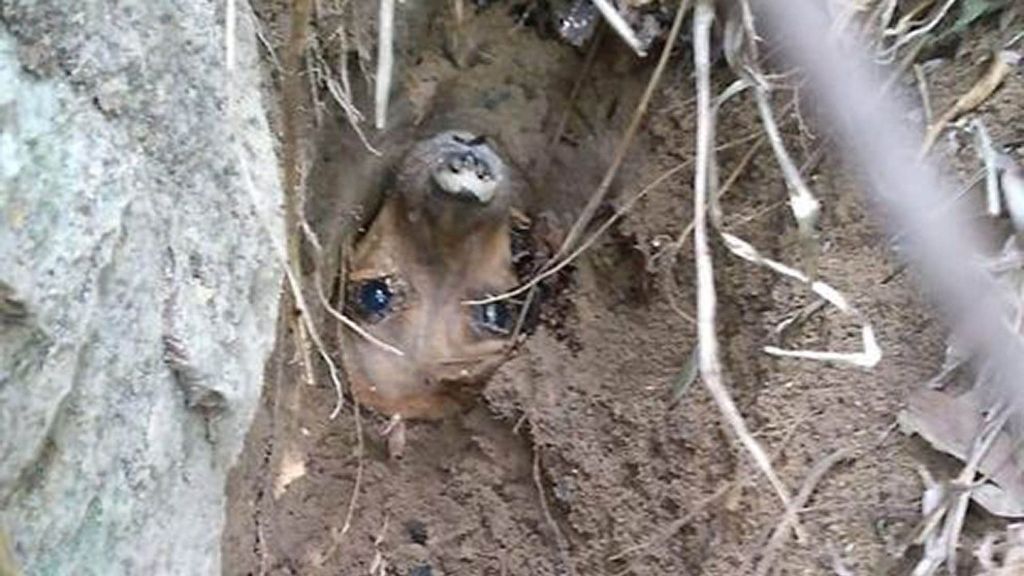 Terrinha the dog spent about five days buried in a landslide in Bombinhas, Santa Catarina in Brazil, before being rescued. (@protetoresdebombinhas/Zenger)

Animal welfare experts hacked their way through a snake-infested Brazilian jungle as they followed the howling of a little dog that had fallen in a hole, and almost became buried.

Animal welfare activists from a non-governmental organization called Protetores de Bombinhas, or ‘Protectors of Bombinhas,’ rescued the dog after hearing reports that it had been crying for help from the jungle thicket for five days. The rescue occurred in the municipality of Bombinhas located in the state of Santa Catarina, in southern Brazil.

Locals had been unable to get through the jungle undergrowth — which is reportedly also infested by snakes — until the rescue was finally carried out by the activists on July 9.

Afterward, the dog was immediately transferred to a veterinary clinic called ‘Petfarma clinic’ where it received necessary treatment and is currently in a stable condition.

The rescue organization’s president, Wilson Roberto Zambardino, reported that he called rescue crews immediately after he heard the dog’s loud cries for help, but due to the inaccessibility of her location, the crews could not find her the same day.

Zambardino explained that the crew got hurt during the rescue operation due to the cruel conditions of the forest where the dog was located.

“We believe that she fell alone, as it is an inaccessible place. There are many poisonous snakes there too,” Zambardino said.

The lost dog, Terrinha, is now receiving care for some minor injuries at the pet clinic, and is in stable condition.

“[The dog] was named Terrinha by those who are taking care of her at the Petfarma clinic,” Zambardino said. “She’s already fine, just having trouble walking. She has normal vital functions.”

Due to ticks bites, Terrinha, who the rescuers found out was a registered community dog, will have to remain in the clinic for approximately 15 days.

“She is recovering very well,” Vet Janaina Diz said. “She was struggling in the hole, she could not walk. But after some treatments and use of anti-inflammatory drugs, she was able to walk again.”

Activists at Protectors of Bombinhas emphasize that Terrinha is up for adoption, since they do not have the resources to care for her on their own.

“Our town is small and we don’t have a shelter house,” the activists said. “The animals we rescue stay in our homes until they find a home. We are full already.”

People interested in adopting Terrinha can call the Petfarma clinic, where she is currently hospitalized.