VIDEO: Bark From The Dead: Pet Pooch Rescued After Five Days Trapped In A Cavity Wall

Firefighters hammer through a neighbor’s concrete garage wall after pup was heard howling for help. 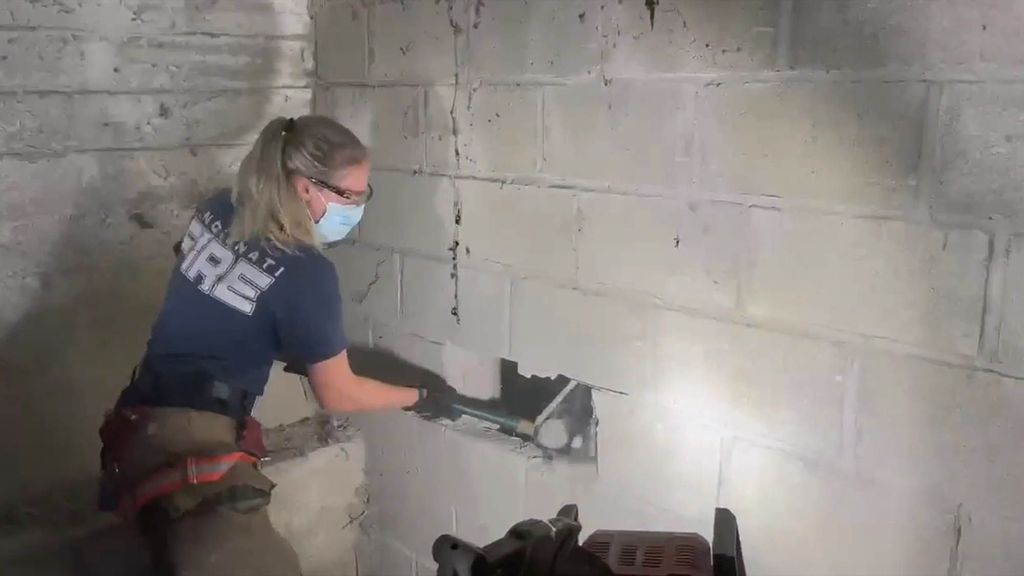 Ohio firefighters rescued Gertie the dog after it had been trapped between two concrete walls in a nearby family’s garage for five days.

The dog rescue was filmed at a home in the neighborhood of Northside in Cincinnati, Ohio, and was shared on social media on Sunday.

“There have been missing posters up in Northside for five days in hopes of someone finding Gertie,” said The Cincinnati Fire Department on Facebook.

“Today a homeowner heard a dog crying behind the garage wall and called us to check it out. This run ended in a happy reunion and a job well done by Truck 20!”

The owner of the property where the dog was found, name not disclosed, called the fire department on Sunday after hearing the dog’s cries.

Firefighters soon discovered that Gertie had fallen down a crevice and was trapped between two walls.

As seen in the footage, firefighters smashed a hole in the garage wall with a sledgehammer until the trapped dog appeared and a firefighter helped the dog out.

The fire department said it took around 10 minutes to get to the dog, and it gladly wagged its little tail after being rescued.

According to the American Society for the Prevention of Cruelty to Animals, while an estimated 78 million dogs and 85.8 million cats are owned in the United States, approximately 6.5 million pets enter U.S. animal shelters nationwide every year.

While exact numbers of lost pets are difficult to estimate, a survey of 1,000 households published in the peer-reviewed journal Animals in 2012 revealed that although 15 percent of dog and cat owners lost their pets, dogs had higher recovery rates, 93 percent compared 75 percent for cats.

The dog escaped from its home five days earlier on July 13, and Gertie’s owner Connie Frick put up missing posters around the area.

Highly visible posters are very effective pet recovery tools, according to Mission Reunite, a nonprofit working to reunite lost pets with their families.

The organization recommends posting neon signs with large lettering at major intersections. They advocate a 5+5+55 rule — writing five words that can be read in five seconds by someone driving 55 miles per hour.

Still, Mission Reunite said the most effective search technique is a detailed physical search of the last place the animal was seen. They recommend notifying neighbors and checking every nook and cranny where the pet could be hiding.