A 2,700-year-old pig skeleton was found in Jerusalem, suggesting dietary practices may have not been fully codified. 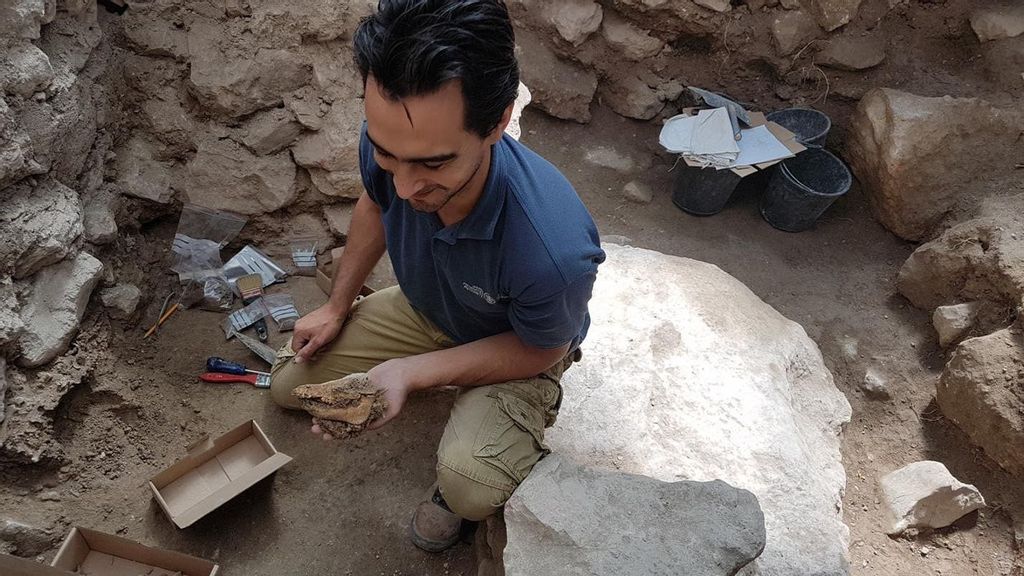 Archaeologists have made a discovery in the ancient City of David that is shaking assumptions about Iron Age religion and ethnicity among those who lived in what is now Israel.

Israeli archaeologists found the skeleton of a piglet in an unexpected place — Jerusalem, the City of David and capital of the ancient Kingdom of Judah. The piglet was found in a structure dating 2,700 years ago to the First Temple period (957 B.C.–587 B.C.), roughly corresponding to the Iron Age, in the heart of Jerusalem.

Jewish dietary laws have long proscribed eating or even touching pigs, while allowing the consumption of animals such as chickens, goats and sheep, as clean or kosher.

The dig was done under the Israel Antiquities Authority and analysis was published in the June edition of the journal Near Eastern Archaeology. The skeleton was found crushed beneath an ancient wall and pottery vessels, suggesting the pig died accidentally because of a still unexplained building collapse during the eighth century B.C.

A co-author of the study titled “Everything but the oink: on the discovery of an articulated pig in Iron Age Jerusalem and its meaning to Judahite consumption practices,”  professor Lidar Sapir-Hen, told Zenger: “You can’t really use pigs as an ethnic identifier in the First Temple period in ancient Israel, but we assumed there was no pork consumption in Judah at that time.”

The region was then divided along a border near Jerusalem, separating the Kingdom of Israel in the north (centered on Samaria), and the landlocked Kingdom of Judah in the south. Further north were the Phoenicians, and to the south along the Mediterranean shore were the Philistine states.

The intended fate of the 7-month-old swine could be suggested by the presence of cooking pots and large earthen storage jars in the room where it was found. Also in the collapsed chamber, archaeologists found the bones of dozens of other animals, including bovine cattle, gazelles, goats and sheep, in addition to birds and fish. Bones showed signs of burning and butchery, thus giving evidence of having been prepared for eating, reported Sapir-Hen.

She suggested the wall collapsed during an earthquake sometime in the eighth century B.C. The building where the piglet was found was in use until approximately 586 B.C., when Jerusalem was invaded by Babylonians.

The remains were in a building of four rooms near the centrally located Gihon spring, which was Jerusalem’s main source of water. The probably upper-class residence was built of uncut stones near the Temple Mount. Several seal impressions (bullae) were also discovered, suggesting an administrative purpose. Also found were a bone pendant and a female human figurine, the latter of which would have been prohibited by religious law as a graven image.

An expert on archaeozoology at Tel Aviv University, Sapir-Hen confirmed that in First Temple-era sites in Jerusalem, and elsewhere in the Kingdom of Judah, pig bones make up a little less than 2 percent of the animal bones found. She said, however, “When we found this pig, it was sharp evidence that there is consumption of pork in Jerusalem at that time.

“It wasn’t the main part of their economy, it was very low. But it wasn’t completely avoided at the time.”  Prohibitions against pork were not notable until Second Temple times centuries later, she said.

Sapir-Hen wrote in Near Eastern Archaeology in 2019 that the frequency of pig remains in digs is “often considered a prime indicator in the search for the identity” of peoples living in the southern Levant in the Iron Age.

Data on the “realities of pig avoidance and pork consumption,” the study’s abstract stated, may refute “common perceptions” about pork consumption among the peoples of the area (Israelites, Aramaean, Phoenicians, Canaanites, Philistines), demonstrating that it cannot be used as an ethnic marker of a site’s human population.

More than 20 years ago, archaeologists noted that pig remains were much more prevalent along the Levantine coastline where Philistines were dominant. Some have theorized that the Philistines brought European swine to the region. It was thus that experts proposed that the lack of pigs indicated Jewish sites.

Pigs are more difficult to herd than goats and sheep, making them less adaptable to nomadic life typical of ancient Israelites before settlement. Swine require significant amounts of water but are easily adapted to urban life and confined spaces.

Pointing out that pigs are relatively rare in the region, Sapir-Hen suggested that environmental and economic factors may have been involved in what later evolved into a full taboo. “But from the beginning, it was not a favored animal in the region,” she said. Sheep and goats are more suitable to the local environment, she said.

When asked whether religious prohibitions played a role in the scarcity of pork, Sapir-Hen replied: “That’s a good question.” After noting that the entirety of the Hebrew Bible was not set down until about 100 B.C., including Leviticus and its dietary rules, she said: “It might be that some habits were already evolving, but we don’t know if there was a food taboo and, if there was, whether everybody knew it or had access to that technology. We don’t know that.”

As rendered in the King James Authorized version of Leviticus: “The swine, though he divide the hoof, and be clovenfooted, yet he cheweth not the cud; he is unclean to you. Of their flesh shall ye not eat, and their carcase shall ye not touch; they are unclean to you.”

Later Jewish thinkers have noted that refraining from pork is a divine command that teaches moral lessons. According to the Chabad movement, pious Jews should not eat predatory birds and certain mammals because their “cruel nature” may be thereby absorbed. Eating kosher food, it states, instills self-discipline among adherents. Dietary laws and other practices have long distinguished Jews and pious followers of Judaism, just as periodic fasting has been a hallmark of Christian practice.

According to scholars such as James W. Watts, Leviticus became law during the Second Temple period (516 BC-70 AD), which bears the name of the second holy temple built on the Temple Mount following the destruction of King Solomon’s Temple (the First Temple) by the Babylonians in 586 B.C. when Jerusalem was conquered and the inhabitants of the Kingdom of Judah enslaved and exiled to Babylon.

However, Scott Lanser, director of Associates for Biblical Research, a Christian group seeking to demonstrate the historical authenticity of the Bible through excavations and research, told Zenger: “There is no indication in the archeological record across Israel that pork was a regular feature in their diet,” adding this is confirmed on the basis of “the bones discovered at Khirbet el-Maqatir and at our current dig at Shiloh.”

Regarding suggestions that First Temple Jewish dietary laws were “unknown, unheeded, or nonexistent,” Lanser said: “The presence of an entire pig skeleton means that a particular family, most likely Israelite, were living in disobedience to the Law of Moses. Although this may seem surprising, it is not an indication of a widespread practice.” He said that kosher laws were extant even in First Temple times.

Scholars assert that the Jewish Bible, including Leviticus, was not recorded in its final form until approximately 100 B.C. during the Second Temple era after the Babylonian exile.

Professor Yaron Eliav, who teaches Jewish history at the University of Michigan, told Zenger that the term “Judaism” first appeared in the 2 Maccabees in the second century B.C., recounting the Maccabean Revolt of Jews against the Seleucids and their Hellenistic influence.

Also, he said, “We don’t know when Leviticus was written,” when asked whether the people who lived where the piglet was found were consciously violating religious norms by eating pork.

Archaeologist Eliav told Zenger that finding the complete skeleton of the pig in Jerusalem confirms previous finds of partial pig remains, even in Jerusalem. Saying that it was “not found just anywhere, it was in Jerusalem,” he noted, “There is significance here in terms of the data, but there is still much work to be done in the evaluation and the scholarly significance, or the ‘So what?’ question.”

As to debate over whether Jewish observance in Iron Age times was “monolithic and homogenous,” Eliav said the pig skeleton is significant because debate over “pigs in a Judean context” may now be put to an end.

Pig remains are scarce not only in Israelite sites of the First Temple period, but also elsewhere in the region of Canaan and even during the preceding Late Bronze Age, which came before the writing of the Hebrew Bible and the emergence of ancient Israel.

The rarity of swine continued in Judah, but also among the gentile Aramaeans, Canaanites and Phoenicians, said Sapir-Hen. Among the Philistines, pork lovers appeared to be concentrated in coastal urban areas but nearly absent in the hinterland. The incidence of pork increased in the Kingdom of Israel, north of Judah, growing to nearly 8 percent of animal bones found at urban sites of the eighth century B.C., according to a media report.

Jessie DeGrado, an assistant professor of ancient Middle East studies at the University of Michigan, told Zenger variations in the consumption of pork in ancient times may reflect regional preferences that arose because pigs are harder to raise in hill country.

Whether eating pork violated religious norms of the time, DeGrado said: “We don’t know. It’s a chicken or the egg question: Did the religious norm come about because people were already not eating pork?” DeGrado suggested that prohibitions against pork may have been taken on when the hill people of Judah and Israel encountered the pork-eaters of coastal Philistia.

Snout Of Line: Trackers On Wild Pigs Show That Weather May Help Predict Their Movements