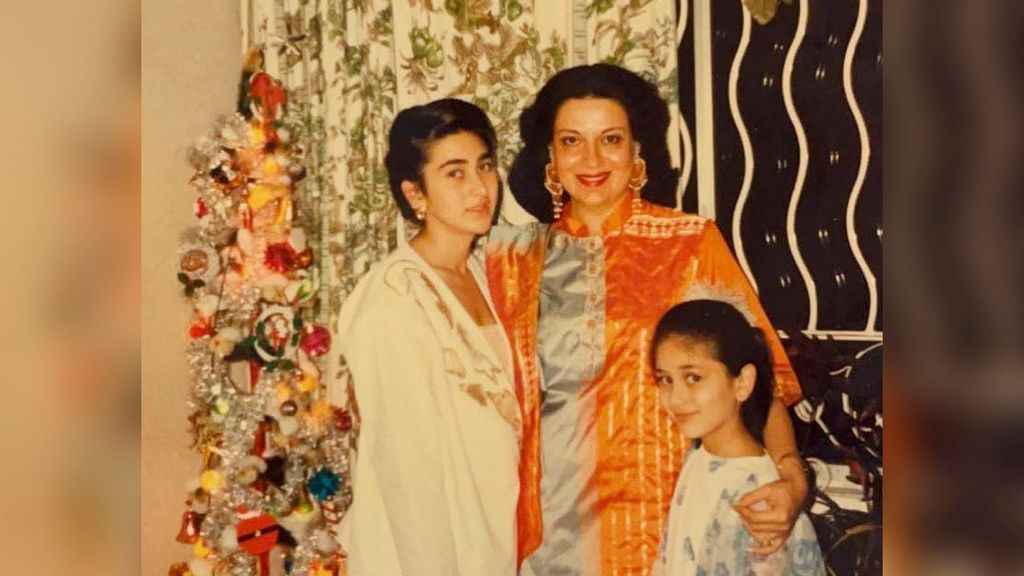 Khan dug out a picture from her 80s family album in which she can be seen posing beside a Christmas tree with her mother and sister.

In the snap, their mother wears a grey and orange-colored silk salwar suit paired with matching jewelry. She is captured standing in between Khan and Kapoor. Kapoor dons a white suit with golden thread work, and a very young Khan is seen decked up in a white and blue dress, her hair tied in a ponytail.

“Is it Christmas already? #mammas girls #these outfits are awesome #the80s @therealkarismakapoor,” said Khan in the post.

Khan recently launched her book, titled “Kareena Kapoor Khan’s Pregnancy Bible.” During the announcement, Khan shared that she has written all her experiences and learnings related to pregnancy in the manual for moms-to-be.

Khan had announced that she’s writing a book about pregnancy on the birthday of her first child, Taimur, in 2020.

She unveiled all the details about the book on July 9, 2021.

Taking to Instagram, Kareena spoke about her pregnancy experience while giving a glimpse of her book.

“There were good days and bad days; some days I was raring to go to work and others where I struggled to get out of bed. This book is a very personal account of what I experienced both physically and emotionally through both my pregnancies,” said Khan in the post.

Khan dated Saif Ali Khan for a few years before tying the knot in October 2012. The couple welcomed their first child Taimur Ali Khan four years later on December 20, 2016, and their second child on February 21, 2021. She said she considers her book as her third child.

“In many ways, this book is like my third child… from conception to its birth today. Published by Juggernaut Books and the amazing Chiki Sarkar, I’m proud to share that my Pregnancy Bible is vetted and approved by FOGSI, India’s official body of gynecologists and obstetricians, along with the help of several expert voices like Rujuta Diwekar, Dr. Sonali Gupta, and Dr. Prabha Chandra of NIMHANS. I’m both excited and nervous to share this with you. The pre-order link is in my bio,” she said.

Meanwhile, on her film front, Khan, whose last movie was “Angrezi Medium,” will next be seen in “Laal Singh Chadha,” co-starring Aamir Khan. Helmed by Advait Chandan, the upcoming Bollywood film is a remake of the Hollywood classic “Forrest Gump,” Apart from “Laal Singh Chaddha.”

On the other hand, her husband, who last appeared in the streaming platform Amazon Prime’s “Tandav,” has “Bunty Aur Babli 2,” “Bhoot Police,” and “Adipurush” in the pipeline.