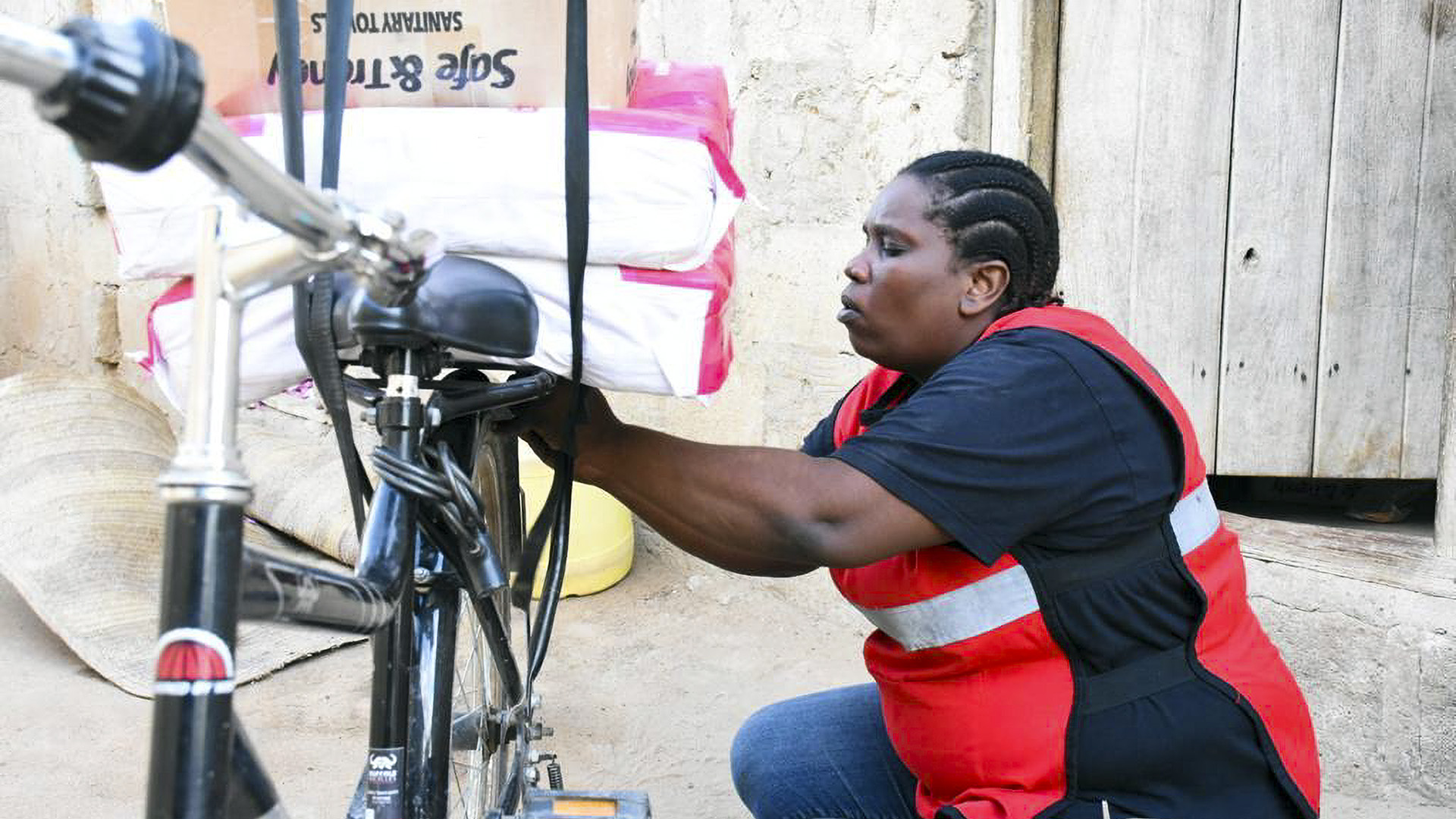 NAIROBI, Kenya — Milka Yuda Hadida, 32, adjusts cartons on her bicycle loaded with sanitary pads before starting her daily journeys to distribute them to poor girls in the expansive, marginalized Tana River County in Kenya’s south.

Many teenage schoolgirls miss classes or drop out of school due to a lack of access to sanitary pads.

Since 2016, Hadida has been providing a solution, often cycling for more than 5 kilometers (3.1 miles) daily to distribute pads.

“I had never been to the capital city Nairobi,” Hadida, a mother of two, told Zenger News. “But in June, I went to collect this medal.”

Due to global Covid-19 travel restrictions, the award ceremony was held at the Kenya Red Cross headquarters in Nairobi. It is usually held in Geneva, Switzerland.

Hadida is a volunteer at the Kenya Red Cross, which nominated her for the award.

She lost her mother at a young age and was brought up by her father. Like many girls in the region, she, too, was shamed for her periods and eventually dropped out of school.

Hadida said she had reached more than 30,000 girls in Tana River County since she started her initiative.

She gets the sanitary towels from well-wishers. She plans to get the government on board to support her initiative.

“Sometimes I hire a car and set off to the remotest villages in Tana River where I can’t reach by my bicycle. I started my charity to empower the girl child and to tell them they are equal with any other on this planet.”

She wakes up as early as 4 a.m. to prepare her children for school before starting her daily rounds. Although she says she is asthmatic—putting herself at risk by waking up early—it has not shaken her resolve.

“I carry my inhaler.”

In all the places she operates, girls speak glowingly of how her initiative helped them stay in school.

“Before Hadida started coming to our school, I used to miss classes for days, and my performance went down,” Josephine Shadrack, 19, told Zenger News from her home.

She hopes to be a forklift operator.

Many families in Tana River County are poor, and therefore, it is a hard choice between a sanitary pad and a meal.

“I have five children, and I spend most of my time tending to my farm or doing other menial jobs to supplement my husband’s meager income,” Josephine’s mother, Eunice Riziki, told Zenger News.

“I know sanitary pads are important, but you can’t live without food.”

In Hola Mission village, a recently divorced Hadija Deye is financially stretched. With casual jobs getting ever scarce due to the Covid-19 pandemic, she can hardly fend for her five children.

“There are no jobs and no money,” she told Zenger News.

Her 17-year-old daughter Rehema Musa, who studies at Hola Primary School, aspires to be a lawyer. Hadida’s distribution of sanitary pads has eased part of the family burden.

“Hadida knows me, so she gives me the pads occasionally,” Musa told Zenger News.

“It is a taboo for girls to talk about menstruation,” Kode Komora, a teacher at Marembo Primary School in Sera village, told Zenger News. “There is no even child-parent discussion about that.”

Amid poverty and vulnerability, culture dominates decision-making among the locals.

Early marriages and pregnancies are rampant in the county, and many girls here would have been married off were it not for strict government policy requiring all children to go to school.

“Girls on their periods would rather hide to escape the trap of early marriages since they are considered already mature,” Komora said.

“If you educate them, they may also think you are exposing them. It’s like telling the society that the girls are now mature for marriage,” Komora said.

Hadida’s charity has a long way to go before reaching every needy girl in the county. Many still wear old clothes or rags during menstruation.

“Hadida came around here to distribute pads, and the funny part is that the boys asked for bread,” Komora said.

“She would love to come every month, but as you know, she depends on donors, so it’s not every time she has the pads.”

Hadida has formed a “girls club” to advise them on menstrual hygiene, early pregnancies, and avoiding pre-marital sex.

“With the Covid-19 restrictions, I now engage them individually.”

Lockdowns restricted people from traveling from county to county, so she moves from village to village during the daytime before night curfew hours.

But due to gathering restrictions, she cannot meet large groups of girls for advice.

However, she continues to distribute the pads to schools through school administrators.

She said sustainable provision of sanitary towels lies in the production of reusable pads.

But such a capital-intensive venture would require the involvement of the national and county governments and non-governmental organizations.

As part of intervention measures, the Kenyan government provides free pads to all public schools but acknowledges that it is hard to reach all the girls at once.

“The government wants all girls to be in school and never to miss due to menstrual period, that is why it is providing them with pads,” Samuel Siringi, the head of communications at Kenya’s Ministry of Education, told Zenger News.

“She is complementing our goal, and we welcome her efforts,” said Siringi of Hadida’s campaign.

Though the award did not come with any monetary funds, for now, she said the Florence Nightingale Medal had given her an impetus to keep more girls in school—one pad at a time.