Saturday night’s fight should have determined the undisputed super-welterweight titleholder. 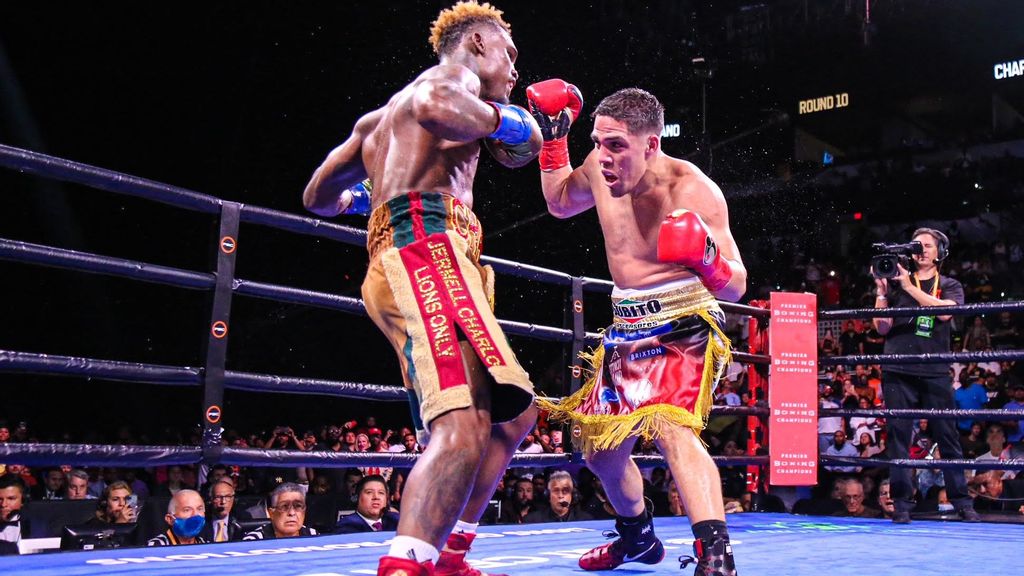 Brian Castaño (right) pressured Jermell Charlo throughout Saturday’s 154-pound unification fight and got the better of the action along the ropes. But the split decision after 12 rounds left fans and analysts clamoring for a rematch. (Leo Wilson Jr./Premier Boxing Champions)

Jermell Charlo wobbled Brian Castaño  in the first round and chased the staggered Argentine around the ring on Saturday night, but he was unable to deliver the knockout blow. Castaño returned with power in the second round, pinning his adversary on the ropes and nearly finishing him.

Few among the raucous crowd at the AT&T Center in San Antonio, Texas, thought the high-octane war would go the 12-round distance.

Yet, incredibly, it did as the combatants traded volleys until the final bell.

Charlo and Castaño fought to a dramatic split decision that left aficionados and the fighters themselves clamoring for a return bout.

The fight pitted puncher-boxer Charlo, of Houston, Texas, against pressure-brawler Castaño  in a clash that could have produced the first four-belt unification champion in the history of the 154-pound division.

Charlo holds the IBF, WBA and WBC crowns, while Castaño  is the WBO titleholder.

“My coach told me I needed the knockout in the ninth round, and he knew what he was talking about,” said Charlo, who is 8-1-1 with seven knockouts under trainer Derrick James. “I hurt him way more than he did to me. Castaño is a real warrior, but my power is serious at this weight division. I won this fight, but we can do it again.”

“I was hurt in the 10th round, and I had to recoup. Same with the beginning of the 11th round,” said Castaño, of Buenos Aires. “But I did enough to win this fight. I hope I get a rematch. He is a great fighter. I need the rematch.”

David Greisman of RingTV.com is among the many observers who agree.

“We should all want a rematch,” said Greisman. “It was a very good, close fight with plenty of action and drama, and then, an inconclusive ending.”

Boxing historian Cliff Rold of BoxingScene.com, said: “The best thing for boxing is a rematch. The fact that mandatories could interfere is a downside of the belts. No mandatory deserves a fight with either Charlo or Castano. Not any more than these two have earned the right to fight each other once again.”

Greisman said a return bout would culminate in a recent trend of quality matchups at 154 pounds.

“These past several years have given us the junior middleweight version of boxing’s most famous ‘triangle theory’ — Joe Frazier beating Muhammad Ali, then Frazier losing to George Foreman, then Foreman losing to Ali,” said Greisman.

“We’ve been doubly blessed at junior middleweight. There’s been a depth of talent and many of the fighters have been willing to face each other. There hasn’t been as much in the way of politics or business interests getting in the way.”

Jarrett Hurd, for example, stopped Harrison in the ninth round of the IBF’s vacant title and twice defended it against left-handed former champions Austin Trout (10th-round stoppage) and Erislandy Lara (split-decision), the latter victory adding Lara’s WBA belt to his IBF crown.

Hurd, in turn, was floored and dethroned by Julian Williams, who lost his next fight and the crown to Jeison Rosario by a fifth-round knockout.

Each fighter is a career 154-pounder in a division whose past has served as a transition between welterweight and middleweight.

Charlo was looking to add Castaño to an impressive resume that includes a sixth-round TKO of Joachim Alcine in October 2015 among the four champions he has vanquished, including Rosario (eighth-round knockout), southpaw Trout (majority decision) and Tony Harrison (11th-round knockout).

Charlo earned his WBC crown via a come-from-behind eighth-round stoppage of John Jackson in May 2016, and defended it in April 2017, flooring Charles Hatley in the third round and finishing him off in the sixth.

Previously unbeaten southpaw Erikson Lubin (October 2017) was stopped in the first round by Charlo, who twice floored Trout (June 2018) and dropped defending champion Tony Harrison (December 2019) three times in their rematch nearly a year to the day after “Super Bad” dethroned “Iron Man” in a disputed unanimous decision.

Last September, Charlo scored three knockdowns during his stoppage of Rosario, adding the Domincan’s IBF and WBA titles to his WBC crown.

“I felt like I won this fight, and I deserve to be going home undisputed,” Charlo said of Castaño. “I want to be undisputed. That’s what I want. That’s my destiny.”

Castaño, also a career 154-pounder, proved to be the division’s next-best entering Saturday’s clash, having survived being dropped in the second round of an interim title-winning two-knockdown, sixth-round KO of Emmanuel de Jesus in November 2016. He won a split-decision for the WBA’s crown over Michel Soro in July 2017. De Jesus entered at 17-1 (12 KOs) and was halted for the first time in his career, and Soro at 30-1-1 (20 KOs),

Castaño battled to a draw in 2019 with left-handed former champion Lara (March), and stopped veteran Wale Omotoso (November) for the first time in the latter’s career, following up those efforts with February’s unanimous decision to dethrone Brazil’s WBO titleholder Patrick Teixeira.

In key non-title match-ups, Williams has beaten Nathaniel Gallimore, owner of a decision victory over Rosario, Lara’s beaten Trout. Lubin rebound from the loss to Charlo to stop Gallimore and Rosario.

“Everyone has continued to jockey for position,” said Greisman. “Even now, after Charlo and Castaño fought for the undisputed championship, there will still be worthy contenders waiting to challenge the winner.”