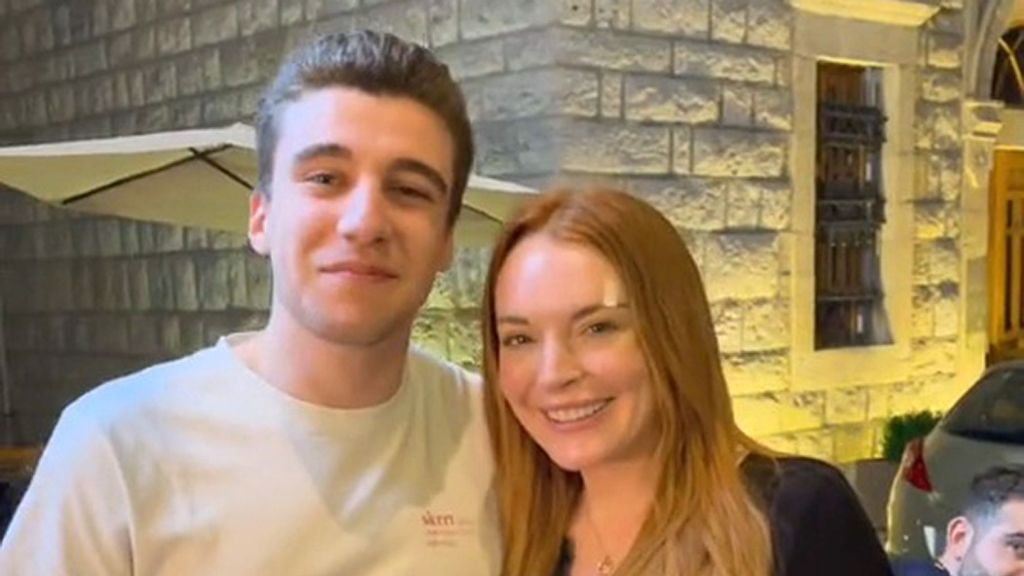 Lindsay Lohan with some fans during her vacation in Lebanon. Note: Picture is a screenshot from a video (Zenger News)

Hollywood star Lindsay Lohan took social media by storm over the weekend after being spotted eating pizza in Lebanon.

The actress, 35, was mobbed by fans after dining at Piazza1140 in the town of Hammana with her Lebanese banker boyfriend Bader Chammas.

Chammas is an Assistant Vice President at Credit Suisse. The two are rumored to have met when Lohan was living in Dubai for six years.

The “Mean Girls” star, who boasts 9.1 million followers on Instagram, posed for snaps with fans, prompting a social media meltdown as other local residents tried to find her for their own picture.

The frenzy started after a video of Lohan in Hammana quickly circulated on TikTok. The video was posted at about 1:30 a.m. on Saturday and at that point was viewed over 88,000 times.

Some residents, shocked by the American actress’s visit to the country, even speculated whether she was in Lebanon for the recent resignation of prime minister-designate Saad Hariri, joking that she was putting herself forward as a candidate, according to local media.

Lohan also posed for a snap with the former president of Hammana Municipality, Georges Chahine. Another post on Instagram was shared of her posing with several local artisans.

The actress sparked up a debate on whether she converted to Islam after being spotted with a Quran in New York in 2015. She was also seen wearing a hijab while visiting refugees during a trip to Turkey.

She moved to Dubai in the United Arab Emirates to escape the trappings of Hollywood after being thrust into the spotlight at 10 years old. But she isn’t the only star who resides in Dubai: Roger Federer, Huda Kattan, Giorgio Armani, and the Beckhams are among the others.

Lohan was previously engaged to Russian businessman Egor Tarabasov in 2016. The engagement was called off shortly after in July of that year after paparazzi got footage of them in a physical altercation in Mykonos.

“Not one person stood up for me while he was abusing me,” she said on Instagram.

She has not appeared in many major on-screen roles in several years and her relationship with Chammas remains relatively private.

In May of 2021, Netflix announced that Lohan was set to star in a Christmas romantic comedy about a woman who suffers amnesia after a skiing accident. The film is expected to start filming in November 2021, and is expected to release in 2022.