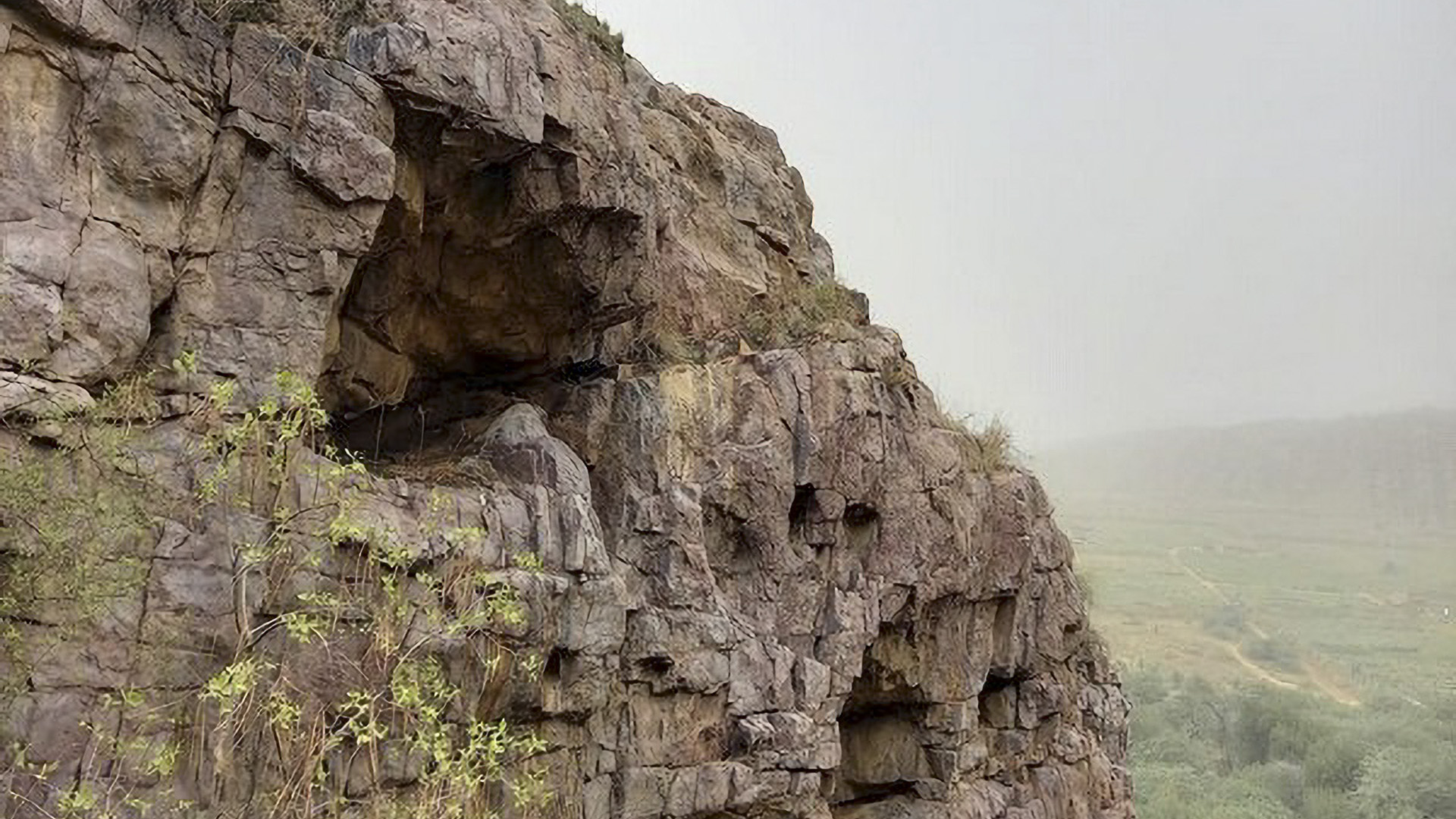 A prehistoric stone age site, possibly over a million years old, has been found in the Mangarbani hill forest in Haryana's Faridabad. (ANI)

Initial exploration by the state archeological department suggests that this may be one of the largest Palaeolithic sites in the Indian subcontinent, where Stone Age tools were recovered from different open-air sites and rock shelters.

Cave paintings in the site—28 miles from New Delhi—were brought to the department’s attention in May 2021 by environmental activist Sunil Harsana, who has been working towards conserving the Mangar village for over ten years.

The department explored the surrounding areas, including Shilakhari, Mangar, Kot, Dhauj, Roj ka Gujjar, and Damdama in Mangarbani and adjoining regions in Gurugram in June, as per Banani Bhattacharyya, deputy director of the Haryana Archaeology and Museums Department.

“Based on this exploration, it can be said that this may be one of the biggest Palaeolithic sites in the Indian sub-continent,” said Bhattacharyya.

“It is one of the sites where Stone Age tools were recovered from different open-air sites as well as from rock shelters.”

“Though tools from the Palaeolithic Age have been identified earlier in parts of the Aravallis [a mountain range in northwestern India], it is for the first time that cave paintings and rock art of a large magnitude have been found in Haryana,” said Bhattacharyya.

“No rock paintings have been found in Aravallis until now. It is not a protected site, and neither has it been properly documented nor explored,” she said, adding that this discovery will take the history of Haryana back to millions of years.

“It should also be mentioned that Shalaish Baisla, a student of archeology who has been working in the area for the past two years, also discovered a Stone Age site along with rock shelters first in this area,” she said.

Over the years, mining activities have destroyed several such sites, as per Harsana. Many such cave paintings still exist where mining has not taken place yet, he says.

While it is difficult to make out what the paintings are of, he said that it appears that human beings made the paintings.

“For the past ten years, I have been trying to save this Mangar village area and have conducted conservation activities, documentation, and projects,” Harsana said.

“I shared the pictures with the people who work in this field and shared them on my social media account.”

“Someone approached the archeological department, and they visited the site. After we showed them the cave paintings, they confirmed that these paintings are ancient, and soon they will work on them,” the activist said.

“There is some rock art, paintings, and scratching on the caves. It is difficult to tell what kinds of paintings these are, but some figure or shape is there.”

“It is difficult to reach the place where these paintings have been found.”

“Some negative elements go there, but I don’t think any artist will go there and paint. The style in which the painting is made is unique. The paintings are deep inside the caves where only the bats live,” he said.

The main objective of the archeological department’s upcoming project is to identify all locations of the Stone Age and consider them for protection, especially the area that falls under Gair Mumkin Pahad (uncultivable wasteland).

The total area is approximately 4,800 hectares. Site conservation and management plans will be prepared.

The project also aims to conduct an intensive study across the landscape to evaluate the status and number of the sites and pockets as primary and secondary deposits in the area. It also aims to document and map all the rock shelters, including open-air sites.

A project will be taken for two years for a detailed study of the area.

Trial trench digging will be started by the department as early as possible.

It also aims to convert the site into a Prehistoric eco-forest. Any mining activity and construction in this area is to be stopped.

“The whole area might be among the most significant Paleolithic sites of the Indian Sub-continent, particularly the study of human evolution and culture,” Bhattacharyya said.

“The site is in continuous occupation throughout the Paleolithic period. It needs more research to comprehend the evolution of tools locally.”

“The department has submitted the proposal of this site for state protection under Punjab Ancient and Historical Monuments and Archaeological Sites and Remains Act-1964 (State Act),” Bhattacharyya said.