Farmers were denied permission for the protest in the Indian capital by the Delhi Police. 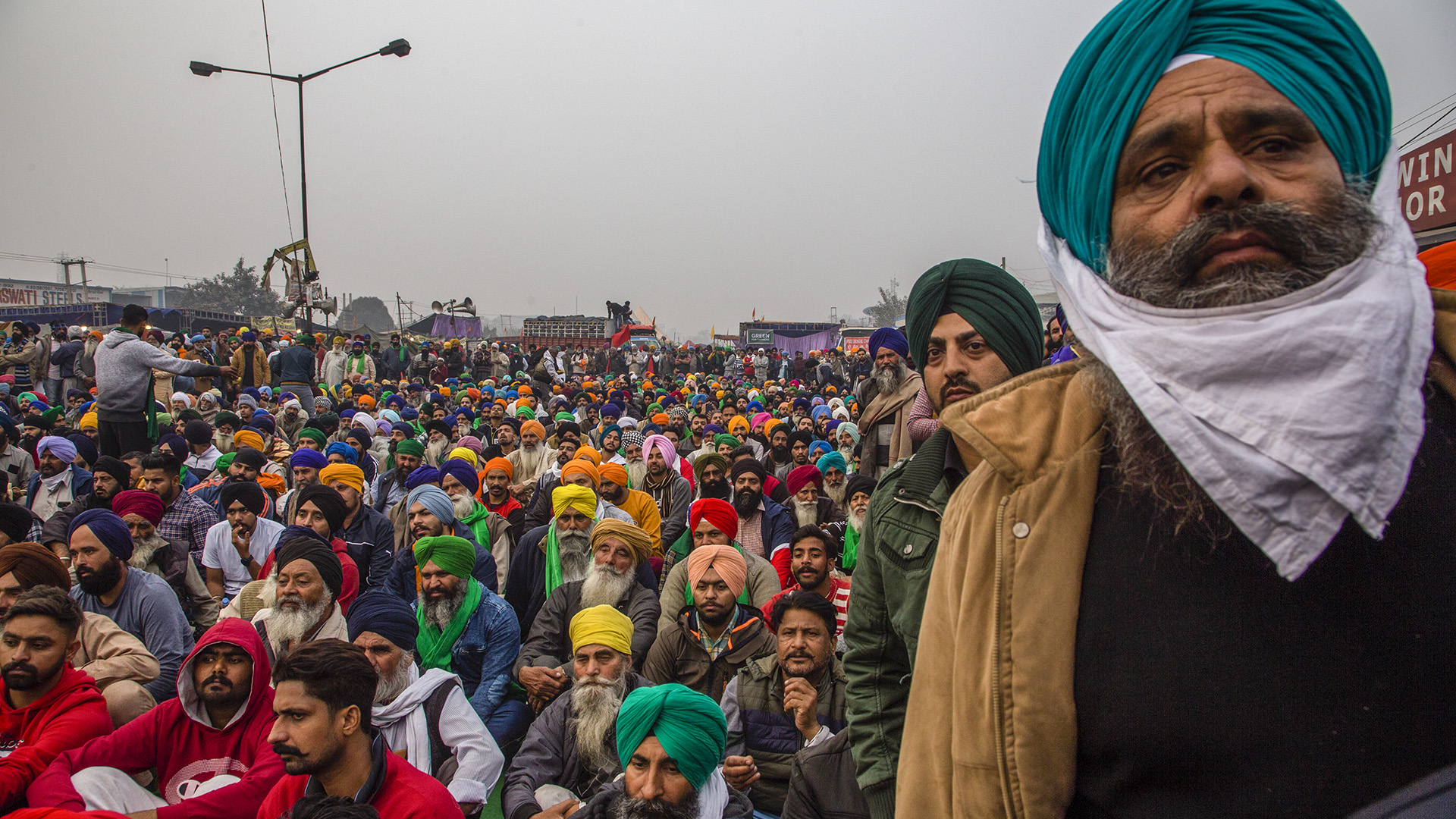 Indian farmers listen to speaker as they sit in a protest against the new farm laws on December 12, 2020 at the Delhi-Haryana state border, India. (Yawar Nazir/Getty Images)

NEW DELHI — During a proposed farmers’ protest against the Indian government’s three farm bills on July 22, there will be no ‘gherao,’ Balbir Singh Rajewal, leader of a farmer organization Bharatiya Kisan Morcha, said on July 19.

Gherao is a way of protesting in South Asia in which a group of people surrounds a place of work, etc., preventing those in authority from leaving until their demands are heard or met.

“We have shared our program with the Delhi Police,” said Rajewal.

“From July 22, 200 farmers will reach Jantar Mantar by bus and hold a Kisan Sansad. There has never been talking of any type of gherao to the Parliament. Farmers who will go to Jantar Mantar will be given ID cards from the Kisan United Front. Anyone who does not have an ID card will not be allowed to participate,” he said.

Farmer unions are planning to protest from July 22 till the end of the Parliament’s monsoon session to demand the scrapping of the contentious farm laws and a legal guarantee on the minimum support price.

Delhi Police officials suggested that farmers consider alternative venues in the national capital for the protest, as per the sources of the Delhi Police.

“We told the Delhi Police that 200 people would march to Parliament from the Singhu border every day,” said Shivkumar Kakka, another farmer leader from Madhya Pradesh.

“Each person will have an identification badge. We’ll hand over a list of protesters to the government. The police asked us to reduce the number of protestors, which we declined. If they don’t give permission, we will go by force,” he said.

Bharatiya Kisan Union (BKU) leader Rakesh Tikait had on July 14 said that the protest would be ‘peaceful.’

However, the country witnessed violence on Jan. 26, the country’s Republic Day, when protesters had broken barricades to enter Delhi and clashed with police in several parts of the national capital during the farmers’ ‘tractor rally.’

The protestors had also entered the iconic Mughal era monument Red Fort and unfurled their flags from its ramparts.

The Delhi Police has written to the Delhi Metro Railway Corporation to keep extra vigil at seven metro stations and close them if needed, given farmers’ protest near Parliament on July 20.

Farmers have been protesting on the different borders of the national capital since November 26 last year against the three newly enacted farm laws: Farmers’ Produce Trade and Commerce (Promotion and Facilitation) Act, 2020; the Farmers Empowerment and Protection) Agreement on Price Assurance and farm Services Act 2020 and the Essential Commodities (Amendment) Act, 2020.

Farmer leaders and the government have held several rounds of talks, but the impasse remains.

The Farmers’ Produce Trade and Commerce (Promotion and Facilitation) Act, 2020 is an Act of the Indian Government that permits intra-state and inter-state trade of farmers’ produce beyond the physical premises of Agricultural Produce Market Committee market yards.

The Farmers (Empowerment and Protection) Agreement on Price Assurance and Farm Services Act, 2020 is an Act of the Indian government that creates a national framework for contract farming through an agreement between a farmer and a buyer before producing or rearing any farm produces.