Homeschooling Children All Over Again Is Overwhelming Sydney Parents

Parents juggling homeschooling duties with work during Sydney’s lockdown say they’re coping but worry how long it will go on. 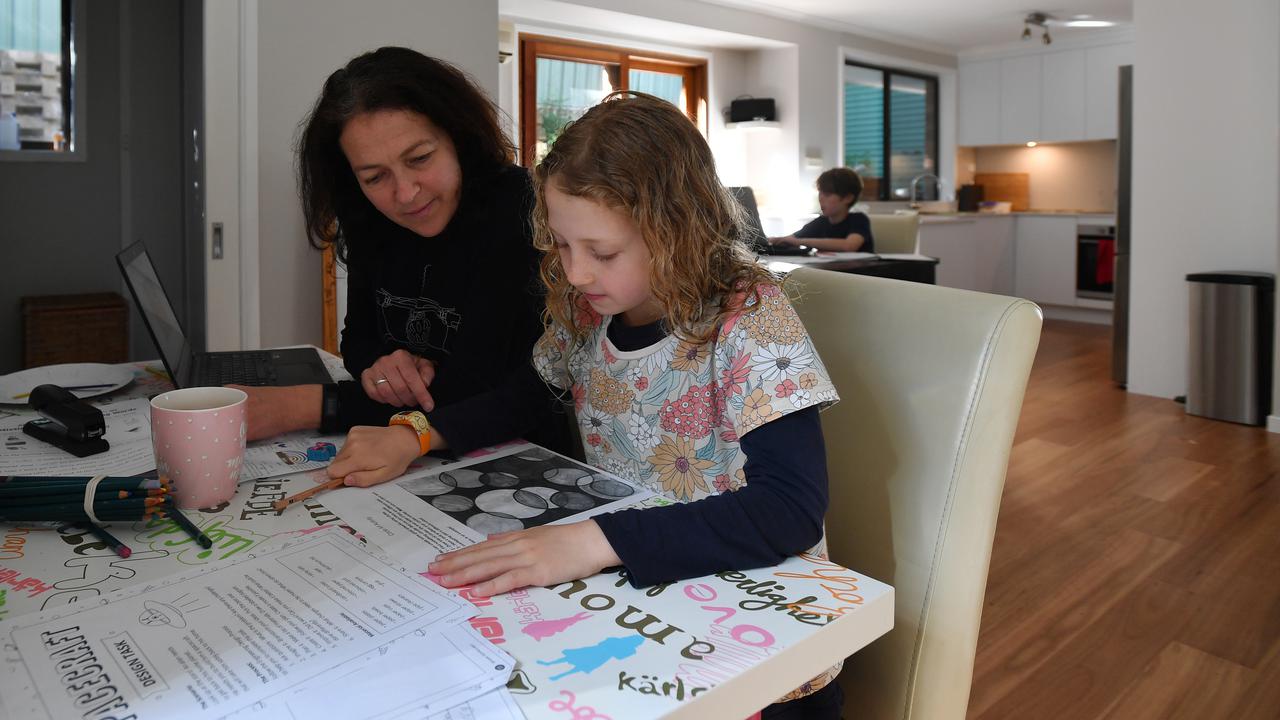 Working mum Georgina Coase races upstairs to her own desk as soon as morning lessons are over. (Dean Lewins/AAP Image)

SYDNEY — Homeschooling this past week has been a rollercoaster for Sydney mother and part-time contractor Emily Scobie.

“If I manage to get my work done and the kids’ tech is working and everything is peaceful, I feel like I’m winning &mldr; and then there will be that time that everything feels out of control again,” she said.

At home at Roseville, in the city’s north, Scobie says despite her children having school computers, she needs to carefully monitor nine-year-old Molly and eight-year-old Monty.

Although she spent seven weeks homeschooling last year, the return initially took her by surprise.

“I didn’t think this was going to happen again,” she said.

“If you told me last year they were going to home-school again I would have really freaked out but actually it’s been easier this time around.”

The marketing manager at a skincare multinational says her local public school sent out equipment on day one and started zoom classes straight away.

Her flexible work environment also helps but it has been tough as someone new in her role and the longer things go, the more concerned she will be about the quality of her own work.

“If it all got too much then, yes, I would send them (to school) for a few days,” she said.

“But until it becomes unbearable I would really try not to.”

Scobie isn’t the only one worried. South of Sydney, at Stanwell Park, freelance director, and writer Luke Shananan thinks classrooms should reopen.

“They should be at school … I’m not taking the disease lightly, but it does seem we’re in a pretty safe space in our area that doesn’t seem to have any cases yet,” he said.

“I can’t believe 18 months later that we’re still doing this.”

Up the road, Georgina Coase is also stretched.

Early afternoon on day three of home lessons, seven-year-old Emily and nine-year-old Samuel have finished for the day.

“If this goes on much longer, that novelty of being motivated in the home quickly wears off,” she said.

Georgina feels lucky to have a flexible employer. It means she can spend two hours each morning guiding her kids’ learning but straight after, she races upstairs to work.

“For the kids, it’s then watching TV, watching a movie, going for a bike ride,” she said.

“Then it’s screens really for the whole afternoon which I really don’t like.”

She says it was like “being hit by hammer” when parents were told home lessons would return.

“I could not believe we were back here after having a year of a lot of freedoms and to end up back here. It feels like a mess.”

While she doesn’t overly stress about her own children falling behind, she said as a manager at an educational not-for-profit group she despairs for others.

While supporting classroom closures, she concedes that if it goes on more than two weeks she may send her children to school for a few days.