About 25 million pets live on the streets of Mexico City, more than in the rest of Latin America.
By Nazaret Estrada July 19, 2021
Facebook
Twitter
Linkedin
Email 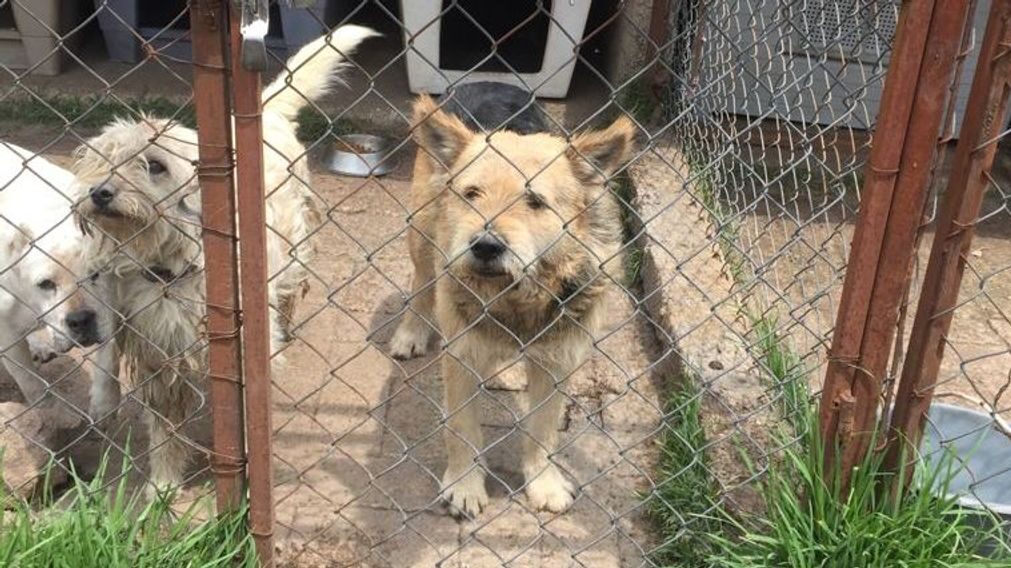 Adult dogs at the San Gregorio shelter have a name and a place where they are treated with respect and love. Not all animals in Mexico have this luck. July 27 is the World Stay Dog Day. (Nazaret Estrada)

Georgina Huerta, the woman in charge of the San Gregorio shelter in the south of Mexico City, has rescued many dogs from the street.

“The saddest story I have lived rescuing dogs is with Gina, who had suffered heavy abuse,” she said. “She was skinny, with her face stuck to a fence and chained. I first fed her, which I repeated for several weeks until her owners asked me to stop. They weren’t feeding her because they didn’t want her to poop.

“I then reported them to the Animal Surveillance Brigade [which is in charge of animal welfare in Mexico City] who came to the scene. Finally, the Environmental and Land Management Procurator’s Office [PAOT] arrived and managed to rescue the dog and her puppies after 6 hours of negotiations. Gina arrived at the shelter in a pitiful state. She was so skinny that her guts were visible under her skin.”

Currently, 7 out of 10 households in Mexico have a pet. The National Population Council (CONAPO) reveals that the number of domestic dogs increased 20 percent from 2008–2018; meanwhile, about 80 percent of people with pets in their households had canines.

Domestic animals suffer from issues such as abuse and stress. Abuse ranges from neglect to torture, mutilation or intentional death.

In Mexico, most pets arrive unexpectedly at homes. Therefore, due to the expenses of food and care, a change in residence, or, simply because the pet grows more than expected, many people end up abandoning them. According to the Animal Surveillance Brigade data, there are 1.2 million stray dogs in Mexico City, and the shelters are overpopulated.

“Shelters such as mine — where we already have 300 dogs — are saturated. We are unable to accept new animals. Thus, I can only accept those animals who are in the most unfortunate states: those that were run over, injured, extremely thin, or very sick,” said Huerta.

“We only have large breeds old dogs, as these are the ones people abandon the most, and nobody wants to adopt them. They can live up to 16 years. I, for one, will not throw them back to the streets. There is nothing more beautiful than seeing one of these dogs run around the garden carefree after having the proper care. For that same reason, I am extremely demanding for those wishing to adopt one of these dogs.”

The Animal Surveillance Brigade (BVA) of the Secretariat of Citizen Security (SSC), under the Animal Protection Law of Mexico City, aims to prevent animal abuse. It sterilizes pets, rescues them if abandoned, and helps those who are stuck in hard-to-reach places.

Further, the mission of the Deputy Attorney General for the Protection and Welfare of Animals, a subdivision of the PAOT, is to assure that these rescued animals are in optimal conditions.

Shelters take great care when releasing an animal to a new home.

“First, we give the person wanting to adopt a detailed form. Thus, we can see if that person is suitable to adopt one of our animals,” said Huerta. “Afterward, we do two telephone interviews and visit the house. If it all is well, we leave the animal with them. Next, we ask for a donation that is not mandatory. Then, we deliver vaccinated, dewormed, and sterilized dogs.”

According to Mexico City’s penal code, whoever mistreats and injures an animal will be punished accordingly, from six months to two years in jail and fines of 3,000 to 6,000 pesos ($150-$300). However, there are many cases of abuse, and the rescue is costly.

“We need a lot of resources to continue helping the animals. Each year we do three free mass sterilization campaigns. We are looking for spokesmen to help us have a bigger reach. It’s the only way to end animal abandonment,” said Huerta.

“The shelter has been operating since 2014. We live on donations. Our goal is to find people interested in adopting dogs. For this reason, now that the midterm elections are over, we made the campaign ‘Mexican Adoption Party.’ Last July 4, we made a virtual catwalk on our social media so that people could get to know our dogs and adopt them.”

Some stray dogs are lucky enough to be adopted by charitable people, which is life-changing.

“I have always had dogs. I have adopted many of them,” said Socorro Rubio, a retiree. “I once had a stay that I adopted from the dog pound; he was my companion for 18 years. Some people say that the more one loves dogs, the more dogs they buy, but this is not always true. Adopted stray dogs are always very grateful” he said.

“I have had Iker for 11 years and Ramiro for 7,” Rubio said. “I adopted them when they were a month and a half. I like having puppies because I can raise them in my way. Iker was adopted from a house, while my son bought Ramiro for 1,500 pesos [$75]. I feed them croquettes, corned beef, as well as rice and vegetables. The groomer bathes them and cuts their hair. They are happy dogs.”

Many agree it is better to adopt a dog than buy a purebred one.

“It is better to adopt dogs, as, if we buy them, we encourage them to become a ‘business,’” said Martin Ramírez Pérez, professor of physics and owner of 9-year-old Perlita, a deer head Chihuahua, which was given to him as a gift. “Some people train their dogs to take care of their homes and attack intruders in the case of a robbery, but I disagree with that. Dogs are here to be our companions, not our servants. They need us just as much as we need them.”

In order to have a pet at home, it is essential to consider the conditions of the animal, such as its size, the care it requires, the expenses involved, and the characteristics of the house.

Pablo Sevilla, a craftsman, tells of his experience with his dogs, where he learned that all these aspects must be considered.

“I found Flanny in a park. He was a cocker spaniel. I bathed, dewormed, and adopted him. He was with us for three years. My children were young and adored him, but we lived in a small apartment, and I, sadly, did not have time to take care of him because, in addition to taking care of my children, I had to work,” he said.

“The dog began to be stressed. He needed exercise. He was locked up all day until he got depressed. He howled in grief. It was sad to see him like that. I realized that I could not give him the care he deserved. So I took him to a wooded area with big houses and gave him to a ranger that fell in love with him.”

The story changed as time went by.

“Fifteen years later, when my daughter, who now lives in a big house, asked me for a pet, I thought that maybe it was time to try again,” said Sevilla.

“We were looking for a small dog so that it could be more manageable, and we found online a shelter that housed abused dogs and put them up for adoption. So now Ónix, a wire-haired Chihuahua dog, has a lot of space and is taken care of by my daughter, who is old enough to take care of a pet,” he said.

“I learned that, before adopting a stray, people must consider their size, the house where the person lives, the time and effort that will be dedicated to the animal, as well as the cost of food and medicine. An adopted dog can change a person’s life,” said Sevilla.