It’s the first time a crop will be cultivated from seeds to full maturity inside the greenhouse of the International Space Station. 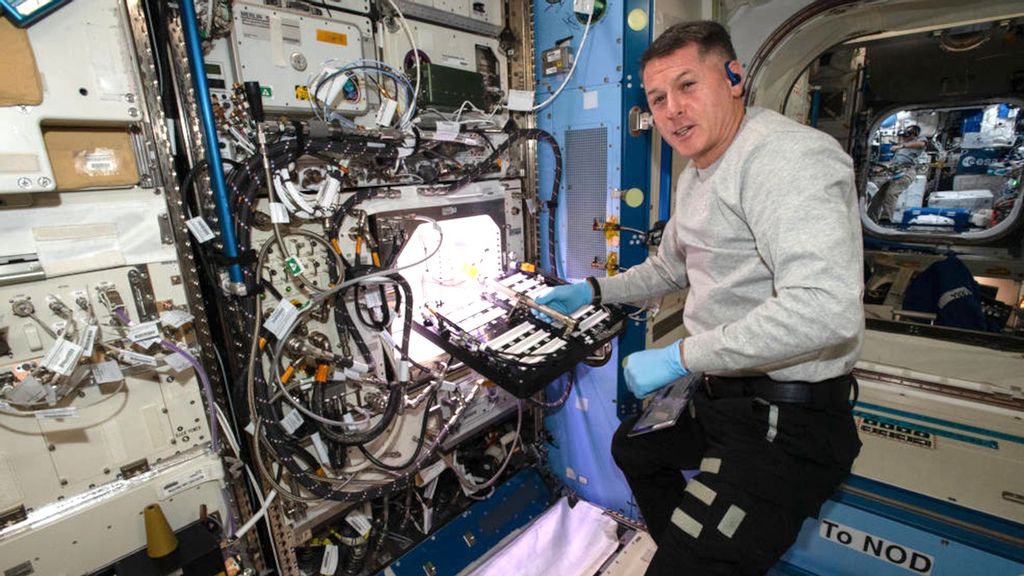 NASA’s newest project is spicing up the International Space Station, as astronauts grow American species of red and green chili peppers 254 miles above the Earth.

The early-ripening variety called the Española Improved, a hybrid species produced in New Mexico, will be the first of its kind to be cultivated in orbit.

The variety is resilient to harsh environmental conditions as it naturally grows quickly and at high altitudes, according to NASA. That makes it suitable for the climate inside the space station’s growing facilities.

Immediately after the seeds arrived, they were planted in devices called “science carriers” by a team with Kennedy Space Center’s Exploration Research and Technology program, then placed in the Advanced Plant Habitat, one of the three space station laboratory chambers adapted for growing and raising crops.

Researchers at Kennedy sanitized and planted the 48 pepper seeds in the science carrier, which has baked clay for roots to grow in and a controlled-release fertilizer.

If the experiment proves successful, the plant habitat will include another crop that could supplement astronauts’ diets on future missions—including travel to Mars.

The pepper seeds, part of an experiment initiated by astronaut and flight engineer Shane Kimbrough, arrived at the space station in June aboard SpaceX’s 22nd resupply mission.

Kimbrough, who was part of the seven-member Expedition 65 crew, has grown crops in space like cabbage and “Outredgeous” red leaf lettuce in late 2016.

The plant habitat “is the largest plant growth facility on the space station and has 180 sensors and controls for monitoring plant growth and the environment. It is a diverse growth chamber, and it allows us to help control the experiment from Kennedy, reducing the time astronauts spend tending to the crops,” said Nicole Dufour, the habitat’s project manager.

Astronauts will look after the peppers for four months before they can be harvested.

NASA reported this is the first time a crop will be cultivated from seeds to full maturity in space, and hopes the yield will be safe for the astronauts to eat.

Some of the peppers will be sent to Earth for additional analysis.

“It is one of the most complex plant experiments on the station to date because of the long germination and growing times. We have previously tested flowering to increase the chance for a successful harvest because astronauts will have to pollinate the peppers to grow fruit,” said Matt Romeyn, the plant habitat’s principal investigator.

“The challenge is the ability to feed crews in low-Earth orbit, and then to sustain explorers during future missions beyond low-Earth orbit to destinations including the moon, as part of the Artemis program, and eventually to Mars. We are limited to crops that don’t need storage or extensive processing,” said Romeyn.

The peppers should help astronauts in space recover their senses of smell and taste, which are often compromised due to the effects of microgravity. NASA also boosts their senses with vitamin C and other nutrients.

“Growing colorful vegetables in space can have long-term benefits for physical and psychological health,” said Romeyn.

The 48 pepper seeds planted in the science carrier will be monitored by a team of astronauts at the Kennedy’s Space Station Processing Facility who will remotely control the watering, LED lighting and other environmental conditions.

“The spiciness of a pepper is determined by environmental growing conditions. The combination of microgravity, light quality, temperature and root-zone moisture will all affect flavor. It will be interesting to find out how the fruit will grow, ripen, and taste,” said LaShelle Spencer, the endeavor’s lead project scientist.

“This is important because the food astronauts eat needs to be as good as the rest of their equipment. To successfully send people to Mars and bring them back to Earth, we will not only require the most nutritious foods, but the best tasting ones as well,” she said.