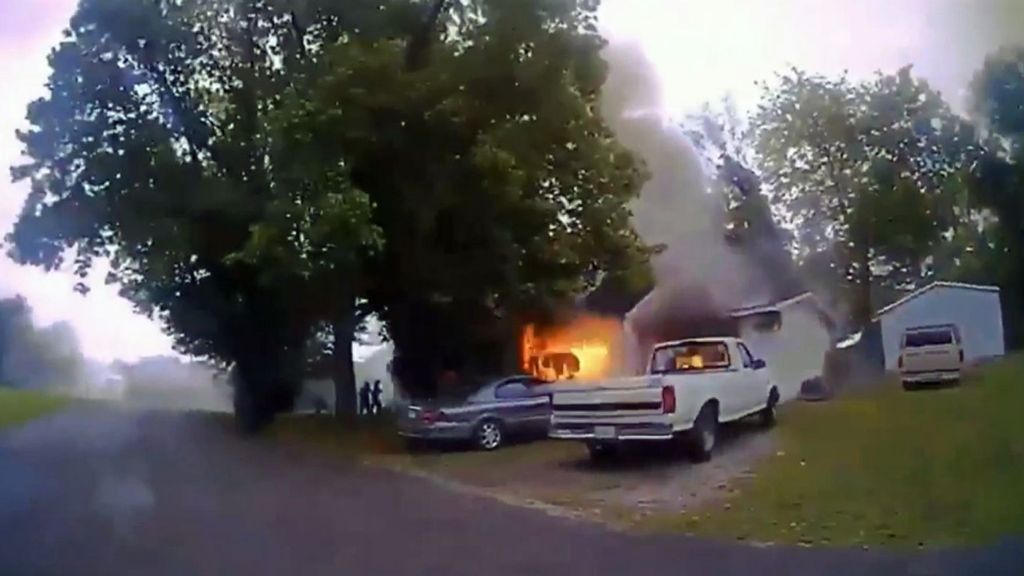 COLUMBIA, Tenn. — A police officer’s body-worn camera captured the dramatic rescue of a disabled woman trapped inside a burning house following the explosion of oxygen canisters.

Corporal Allan Ervin rushed out of his vehicle to help April Chumley, 37, whose home caught fire in the city of Columbia, Tennessee on July 9.

The incident occurred because of oxygen tanks that were stored inside the house, but the cause of the explosion is still unknown, according to reports from the fire crews that received the call.

The video shows how the woman’s parents managed to get outside before the explosion, while Chumley, who appears motionless and non-communicative, remained lying near the front door.

Immediately after, Chumley’s father and a neighbor rushed to the burning home in an attempt to get her out. When Ervin arrived on the scene, he took the matter into his own hands by rescuing her.

Paramedics transported Chumley to the Vanderbilt University Medical Center in the city of Nashville, where she was treated for severe burns and smoke inhalation.

Ervin, on the other hand, was not hurt during the rescue operation. Chumley’s parents, however, were admitted to the hospital but were released shortly after.

“He finally let go of his walker and crawled to the front door and I saw a blanket with someone’s hands, and then I reached for the blanket and boom, that’s when the first explosion happened, and the cop finally comes and goes get away from the house,” the neighbor said.

The police said the cause of the fire is still under investigation.

The most common causes of fires are cooking, heating, electrical, smoking and candles, according to the National Fire Protection Association.

So far this year, Tennessee has had 51 unintentional fire fatalities according to the Tennessee Department of Commerce and Insurance. In 2018, fires in residential and nonresidential structures resulted in 86 percent of the state’s total fire fatalities, compared to a national average of 78.5 percent, according to data compiled by the U.S. Fire Administration’s National Fire Incident Reporting System.

Also in 2018, Tennessee saw 15.4 deaths per 1,000 residential fires, compared to the national average of 6.1 deaths, according to the U.S. Fire Administration.

Earlier this year, a police officer threw himself into the flames of a poisonous fire in Illinois to save an 83-year-old man’s life. Despite becoming disoriented after too much smoke inhalation, the victim was expected to make a full and speedy recovery due to the quick rescue efforts of the cop.

Data from the National Safety Council show that the number of fire deaths decreased dramatically through the mid-20th century, and have been in steady but more gradual decline since the 1990s.