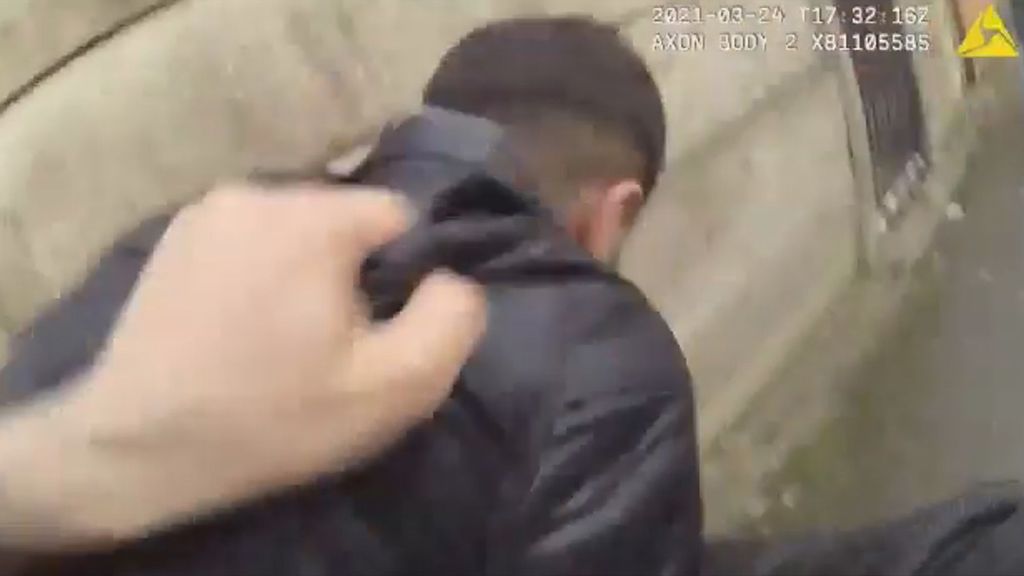 The suspect Mohammed Shabaz Rafiq being arrested by the officers in Manchester, England, on March 24, 2021. (@GtrManchesterPolice/Zenger)

Recently released video shows Manchester police arresting a man they had witnessed in possession of a gun, leading to him being jailed for five years.

The arrest took place in the inner-city area of Harpurhey in Manchester, England, on Mar. 24.

Mohammed Shabaz Rafiq, 24, was chased by Greater Manchester Police officers after they saw a group of people loitering around Ashgill Walk and turned around to investigate.

The three officers, Jack Ginger, Richard Hayes and Jessica Hamblet, then heard gunshots just yards away from where they were patrolling.

Moments later, they saw Rafiq running from the scene and noticed he was carrying a black trash bag.

The officers identified themselves, however, the suspect continued running away and appeared to try to get into a moving Ford Focus, which seemed to pull over as police approached the suspect.

An officer caught up with the suspect and arrested him and the police team then found the discarded trash bag with a converted gun and empty cartridge inside.

On July 15, Rafiq was sentenced to five years in prison at Manchester Crown Court after pleading guilty to possession of a firearm.

“This is another fantastic result for the people of Greater Manchester where we’ve removed a firearm from the streets and found those responsible,” police spokesperson Liam Carolan said.

He added that in the past year, the Greater Manchester police have taken over 100 firearms from suspects.

“The quick-thinking and bravery of the three officers at the scene could have arguably saved a life that day. They are a credit to GMP and the people of North Manchester and have helped to ensure we’ve taken another criminal involved in firearms off the streets who so desperately tried to get away,” he said.

Over the last three years, crime in Harpurhey has been centered around (in order of prevalence) violence and sexual offenses, anti-social behavior, public order, and criminal damage and arson, according to U.K. police.

In the past three years, there were 2,090 violent or sexual offenses.

Anti-social behavior refers to activities like graffiti, littering, racism, or drinking or drug use that causes loud noise. There were 761 such incidents.

Public order crimes include things like disorderly conduct or prostitution. There were 638 of those cases.

There were 481 criminal damage and arson cases.

But this case falls under the category possession of weapons, of which there were only 53 in the past three years in Harpurhey.