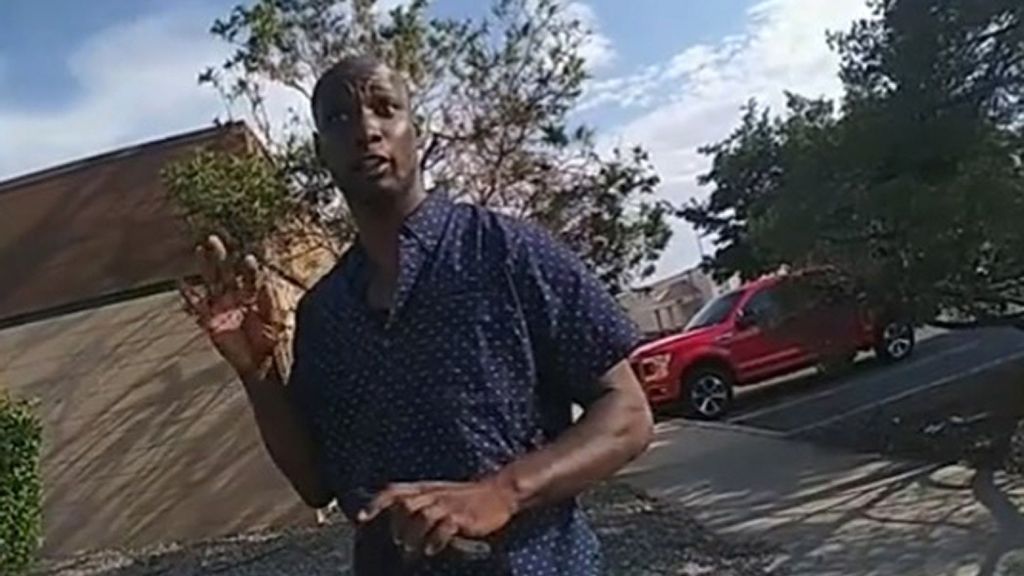 Clifton White confronts deputies with verbal abuse at scene of a crime in Albuquerque, New Mexico, on July 15. (Screenshot/@BCSONM/Zenger)

A Black Lives Matter protester was arrested on July 15 at the scene of an FBI agent-involved deadly shooting in Albuquerque, New Mexico.

Clifton White was arrested “after entering an active scene where a federal officer had just been shot and refused to leave,” the Bernalilo County Sheriff’s Office said in a statement posted on Facebook.

“The body camera footage speaks for itself,” the sheriff’s office statement said, referring to the video recorded by deputies on the scene. “This is an individual that intentionally entered an active scene and interfered with the investigation, where the attempted murder of a Federal Officer had just occurred. White appears to be a police agitator who has violated parole numerous times and is back out on the streets yet again.”

The video shows deputies approaching White on foot at the scene marked by police tape and advising him he is at a crime scene and should move. At that point, White begins a tirade, swearing repeatedly at deputies, calling them pigs and ignoring their repeated requests for him to leave the crime scene. There is no physical contact between White and the deputies.

The deputy’s lapel video shows White and Guerrero walking in the direction of the cordoned crime scene before an officer explains they are in a crime scene.

The officer says: “That is as far as you need to go.”

White replies: “You don’t need to tell me nothing.”

Yellow tape can be seen in the video.

White was ultimately handcuffed and led to the authorities’ vehicle, which he entered while still shouting accusations at deputies.

White was charged with assault on a law enforcement officer and booked him into jail but later released.

White and Guerrero said they believed the BLM activist was being targeted for organizing a protest in the city.

Deputies said White had hypertension and required medical therapy to calm down.