U.S. helicopter wipes out streetlights as it loses power on its way to an airshow.
By Andreea Tabarcea July 16, 2021
Facebook
Twitter
Linkedin
Email 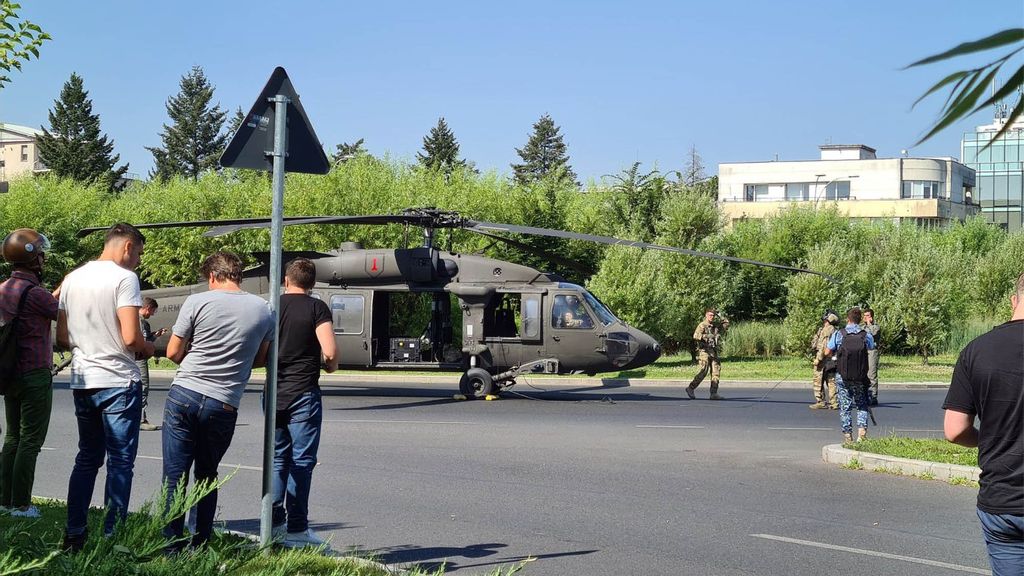 A U.S. Black Hawk helicopter made a dramatic emergency landing on a roundabout in the Romanian capital Bucharest as city residents gasped in shock.

The U.S. Black Hawk was forced to carry out an emergency landing on a busy road at around 10 a.m. on Charles de Gaulle Square on July 15.

Traffic in the immediate area was stopped as a precaution, however, no one was injured in the incident. The aircraft was temporarily moved to the side of the road to allow traffic flow to continue, and the U.S. is coordinating with the Romanian Air Force and local authorities to remove it, according to a U.S. Army press release.

The U.S. helicopter was part of a group that was training ahead of Romanian Air Force Day, which takes place on July 20. The holiday is celebrated with an aviation parade over the Romanian capital. The date coincides with Saint Elijah’s Day in the Eastern Orthodox Church, as the Prophet Elijah is regarded as the patron saint and protector of pilots.

In video captured by eyewitnesses, the Black Hawk helicopter is seen flying over Bucharest in an air transport column.

According to reports, the helicopter started to lose altitude and ended up landing on Aviatorilor Boulevard.

During the emergency landing, the Black Hawk reportedly knocked down two streetlights which ended up damaging two cars.

After the incident, the Chief of Staff of the Air Force canceled all aviation events that were to take place on Air Force Day.

Both the U.S. military and the Romanian police said they are investigating the incident.

The Romanian Ministry of Internal Affairs highlighted in a Facebook post the two police officers who were on the scene when the helicopter went down and made the call to divert traffic.

“The two colleagues remained on site, until the helicopter was picked up at the intersection,” the post said. “These are Beinur and Adrian, the two policemen who showed presence of mind today and managed to prevent disaster from happening!”

Another incident in which the same American helicopter model was forced to land happened in the Dobrogea area a month ago. During a NATO military exercise, the aircraft landed urgently in a field.

The U.S. Embassy in Bucharest stated they are “aware of the incident, and we are closely following developments. Information says there are no victims. We’re working with our Romanian partners to resolve the situation and provide up-to-date information as it becomes available.”

The U.S. unit of the downed Black Hawk is deployed from Illesheim, Germany, as part of a rotation supporting Atlantic Resolve, a series of training events conducted with NATO allies meant to deter aggression in the area. It’s part of the 3rd Battalion, 1st Aviation Regiment, 1st Combat Aviation Brigade.