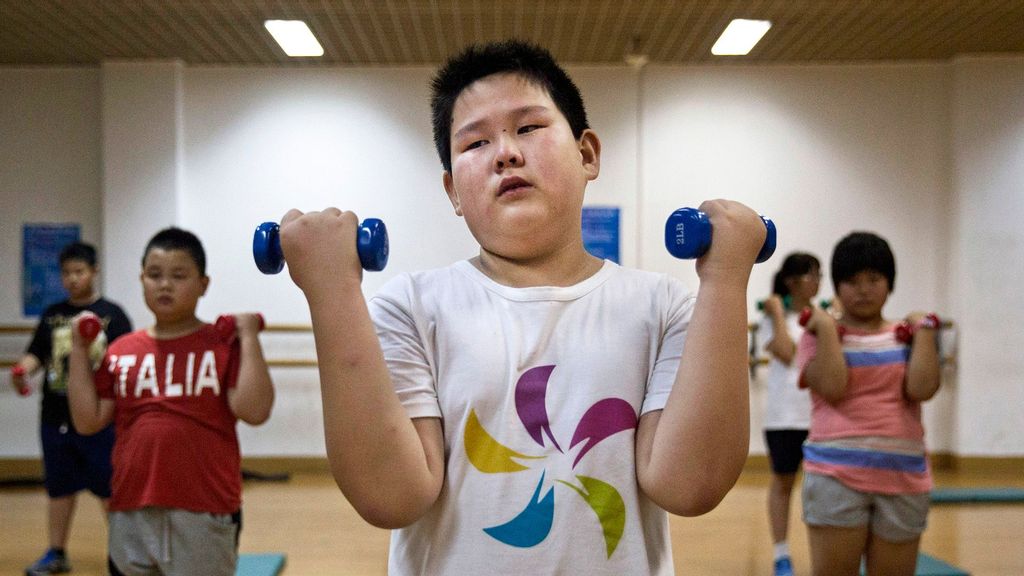 Tears run down the cheeks of an overweight Chinese student as he uses weights during training at a camp held for overweight children at a local university on July 16, 2014 in Beijing, China. Obesity is a growing problem amongst the burgeoning middle-class in China, and recent studies show that the country is now the second fattest in the world behind the United States. (Kevin Frayer/Getty Images)

The study was led by the Barcelona Institute for Global Health (ISGlobal), a center supported by the “la Caixa” Foundation and the University Institute for Primary Care Research Jordi Gol (IDIAP Jordi Gol).

The study was funded by the La Marato de TV3 Foundation, which aims to promote biomedical research through the funds raised by the program. The findings of the study appeared in the journal ‘Environment International.’

The study analyzed data on 2,213 children aged 9 to 12 years in Sabadell (Barcelona) who were participating in the ECHOCAT and INMA projects. Forty percent of the children were overweight or obese.

The researchers investigated the association between urban factors that the children were exposed to between October 2017 and January 2019 (ambient air pollution, green spaces, built environment, density of unhealthy food establishments, road traffic, and road traffic noise).

With this, various measures of childhood obesity like the body mass index, waist circumference, and body fat, along with weight-related behaviors like fast food and sugar-sweetened beverage consumption, physical activity, sedentary behavior, sleep duration, and well-being, were also investigated.

Few studies have assessed whether the urban environment influences children’s behaviors to understand better the relationship between this environment and the risk of childhood obesity.

Understanding the mechanisms of this relationship will facilitate the development of community-level health promotion programs to encourage healthier behaviors in the city.

Another novel aspect of this study is that it assessed multiple urban exposures together under the concept of exposome or the study of multiple simultaneous environmental factors.

“Higher levels of air pollution, traffic, and noise were associated with higher body mass index and a higher likelihood of the child being overweight or obese,” said lead author Jeroen de Bont, a researcher at ISGlobal and IDIAP Jordi Gol.

Although the mechanisms that could explain this association remain unknown, the scientific team proposed various hypotheses.

Air pollution could disrupt the molecular mechanisms that cause obesity by inducing inflammation or oxidative stress, hormone disruption, and visceral adiposity (although the studies published to date have been performed in mice).

Noise could influence sleep deprivation and increase stress hormones associated with physical development in childhood, and could increase the risk of becoming overweight.

The findings were consistent with those obtained in the same study when some environmental exposures were analyzed separately.

In particular, the number of unhealthy food establishments in an area was also associated with childhood obesity, probably because such an environment may favor higher fast-food consumption and higher caloric intake.

However, the study did not find an association between the urban environment and the level of physical activity, sedentary behavior, and other weight-related behaviors in children, although it is thought that such factors could play a role.

For instance, in areas with a good public transport network and nearby facilities and shops, journeys tend to be made on foot or by bicycle, which increases children’s physical activity.

The fact that the study did not find an association between these factors could be attributed to “the difficulty of determining to what extent obesity itself influences weight-related behaviors,” said de Bont.

Moreover, information on children’s physical activity was collected using a questionnaire that did not consider where the activities took place.

“We were able to find out if the children played basketball or football, but not if they cycled in nearby green spaces,” he said.

“Socioeconomic status plays an important role in the association between the urban environment and childhood obesity that is not yet clear,” said author Martine Vrijheid, a researcher at ISGlobal.

In this study, children living in more deprived areas on the city’s outskirts had higher rates of overweight and obesity even though they were exposed to lower levels of air pollution, road traffic, and noise and had access to more green spaces.

Further research is needed to shed light on this issue.