Undisputed Super-Welterweight Title Up For Grabs In Saturday Night Fight 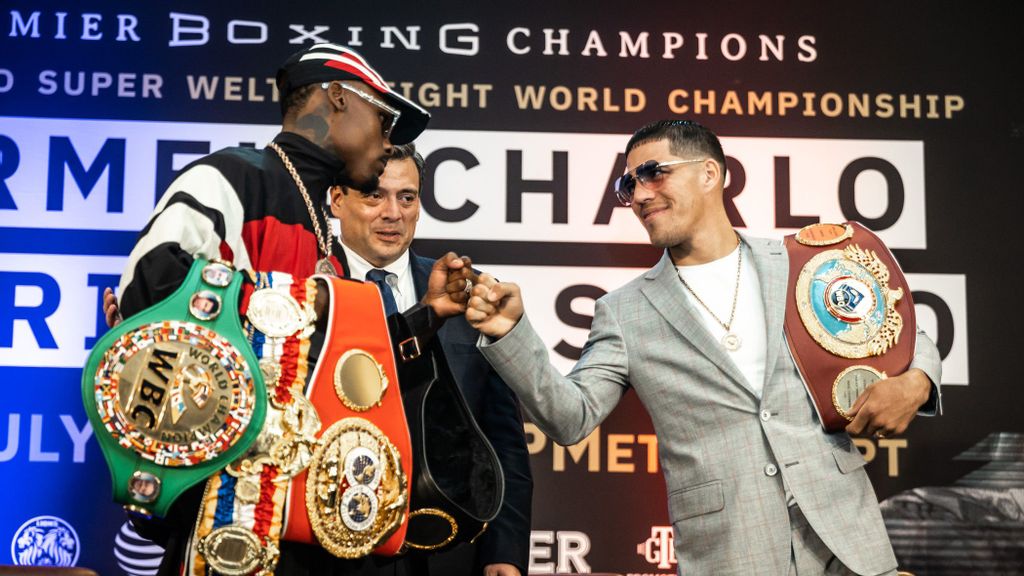 Jermell Charlo and Brian Castano aim to knock each other out on Saturday in a clash that could produce the first four-belt unification champion in the history of the 154-pound division.

“It’s dangerous to walk into my shots,” said “Iron Man” Charlo. “Most opponents I’ve faced who’ve done that, I’ve put them out.”

As for “El Boxi” Castano, the Argentinian said: “I’m ready for war. If Charlo wants to brawl, then by all means I will welcome that.”

Charlo, of Houston, Texas, fights for family and legacy. Castano, of Buenos Aires, is in it for glory and country.

The 31-year-olds will battle for Charlo’s IBF, WBA and WBC crowns and the Castano’s WBO title in a Premier Boxing Champions headliner from San Antonio, Texas. It will air on Showtime at 9 p.m. EDT.

“What’s on my mind is the legacy,” said Charlo. “This could be the fight … that puts me in the Hall of Fame.”

Charlo (34–1, 18 KOs) retained his WBC crown in September over IBF/WBA title-holder Jeison Rosario in a three-knockdown, eighth-round stoppage. The finishing blow was a final-round gut jab that left the hard-punching Dominican flat on his back.

On the same night, Charlo’s twin, Jermall, dominated Sergiy Derevyanchenko of the Ukraine by unanimous decision. Those wins come on the heels of the siblings establishing a milestone by sharing a card in May 2016 in Las Vegas two days after they turned 26.

That night, Jermell — the younger sibling by a minute — came from behind for a title-winning eighth-round stoppage of John Jackson. The history-making feat preceded Jermall’s unanimous decision over left-handed former champion Austin Trout in “The Hit Man’s” second of three IBF 154-pound title defenses. In winning the vacated world title, Jermell joined Jermall as a junior middleweight champion.

“I won a world title at the same weight division with my brother,” said Jermell, whose twin is a WBC 160-pound champ. “This fight is going to solidify the Charloses in people’s minds. I’ve wanted to be undisputed since I was a child.”

“You’re going to see a top pound-for-pound fighter,” said Charlo, who is after his third straight stoppage. “I’ve knocked people out in just about every round.”

In 2017 as Charlo halted Charles Hatley and southpaw Erickson Lubin in consecutive bouts.

Following a two-knockdown majority decision over Trout in June 2018, Charlo was dethroned as WBC champion in a disputed unanimous decision loss to Tony Harrison that December.

Charlo bounced back with a third-round stoppage of Jorge Cota in June 2019, highlighted by separate right hands that twice left the loser flat on his back. Cota was a late replacement for Harrison, whose ankle injury scuttled their rematch before Charlo brutally dropped him twice in the 11th and final round of their return title bout in December 2019.

Charlo will have a healthy trainer this time in Derrick James, who developed a hernia the first week of the Rosario camp. James endured through December as Errol Spence defended his IBF and WBC welterweight titles by unanimous decision over Danny Garcia after being hospitalized in critical condition as a result of a car accident in October 2019.

Castano (17–0–1, 12 KOs) began assisting his father, Carlos, a street sweeper and former pro boxer, in removing debris and litter from the roads of La Matanza or “The Slaughter,” a violent area in Buenos Aires.

“I was ashamed at first to be seen sweeping streets,” said Castano. “I used to cover my head with a jacket. In time, I became proud that I was helping my family.”

Castano grew up surrounded by boxers, which helped him resist the lure of the streets and follow in the footsteps of Argentine legends such as ex-champions Carlos Monzon, Sergio Martinez, Marcos Maidana and Lucas Matthysse.

“The glory of a win would be equal to a potential Argentina World Cup title,” he said, but noted: “Soccer is different because you have 10 other people to rely on. I’m on my own in the ring.”

Castano survived being dropped in the second round of an interim title-winning two-knockdown, sixth-round KO of Emmanuel de Jesus in November 2016, won a split-decision for the WBA’s crown over Michel Soro in July 2017, and, after being elevated to the status of WBA regular champion, stopped left-handed Cedric Vitu by 12th-round TKO in March 2018.

“El Boxi” held the WBA crown until being stripped in June 2019 for declining to face mandatory challenger Michel Soro in France. But in 2019 Castano had a draw with left-handed former champion Erislandy Lara (March) and a one-sided fifth-round stoppage over veteran Wale Omotoso (November), who retired on his stool with a damaged left shoulder

“I have more variety in my arsenal than anybody Charlo’s fought,” said Castano, who nearly stopped Teixeira in the 12th with a right to the body and a left uppercut.

“If I have to go for more power instead of finesse, rest assured that I can knock Charlo down. I want to be the first in history to be undisputed champion at 154 pounds in the four-belt era and one of the best Argentinian and Latin American boxers who ever lived.”