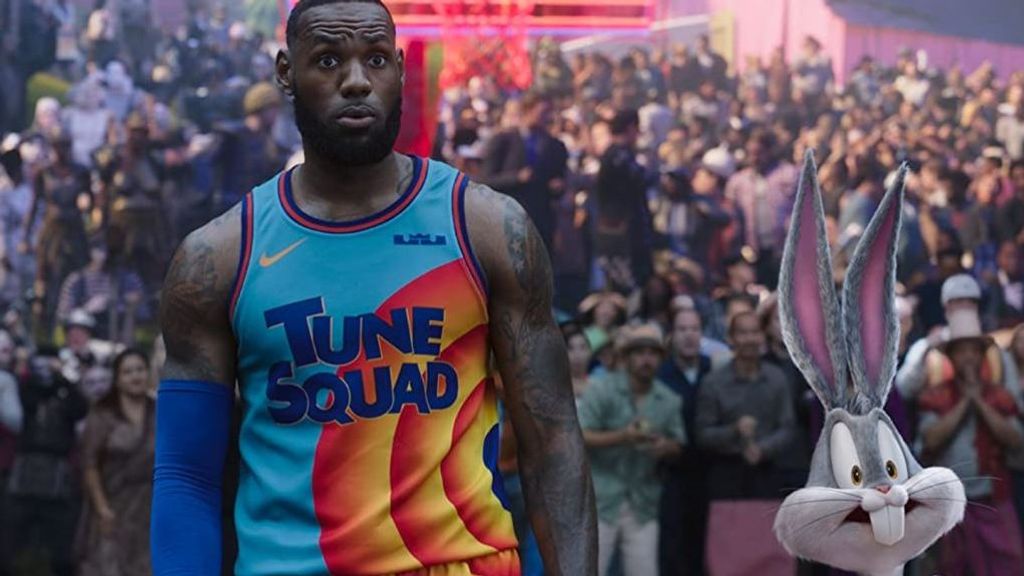 Jeff Bergman is the voice of Bugs Bunny with LeBron James in “Space Jam: A New Legacy.” (Warner Bros.)

Michael Jordan is not only the greatest basketball player of all time but one of the most beloved players in the history of the game. While LeBron James is definitely one of the greatest players ever, he is not as universally loved as Jordan is. That makes it easy to understand why the fan reaction to a “Space Jam” sequel is proving lukewarm at best.

1996’s “Space Jam” starring Jordan wasn’t a great film in the eyes of time, but it was an essential part of being a kid in that era with a love for ’90s basketball and classic cartoons. It also didn’t hurt that it had Bill Murray.

In 2021 however, all the charm and nostalgia of the 1990s have long expired, and now we are left with a Warner Bros. vehicle to use James and Looney Tunes to sell their HBO Max streaming service.

The Story: “Space Jam: A New Legacy” begins by highlighting the life of James. The NBA superstar wants his son, Dom (Cedric Joe), to follow in his footsteps, but the youngster rather be a video game developer than an NBA player.

When James and his son go to a meeting at Warner Bros., they end up shooting down the Warner 3000 Server-Verse, a virtual space ruled by a tyrannical artificial intelligence by the name of Al-G Rhythm (Don Cheadle). As revenge, Al-G Rhythm kidnaps James and Dom and forces them to play a game of virtual basketball. The stakes: if LeBron’s team loses, all of his fans will be stuck in Looney World forever. To make matters worse, LeBron’s son is playing for the other team.

Bright Spots: “Space Jam: A New Legacy” is visually far more impressive than the 1996 film. The cartoon characters who were 2D in the original film are now CGI thanks to 25 years of technological advancements. The film takes place in a virtual reality setting that occasionally moves back and forth from GCI to modern animation.

Multiple animation teams, including Warner Animation Group and Lucasfilm’s Industrial Light & Magic, were brought in to create the traditional and CGI animations. It is the animation and animated characters who are the saving grace of this film.

There is one funny and original bit involving the return of Michael Jordan, but that is the only memorable moment in a run time of nearly two hours. While the hard work on the animation is appreciated, virtually everything else about “Space Jam” 2 is a miss from top to bottom.

Weak Spots: The writing is beyond poor and there’s a good reason for that. “Space Jam: A New Legacy” inexplicably has, in the words of James, “not one…not two…not three…not four…not five&mldr;” but six screenwriters. The narrative is so contrived that even in a movie about cartoon characters (who don’t appear until 30 minutes in), all the emotion is about as authentic as a pair of bootleg Jordans.

The smartest piece of writing is when James meets with Warner Bros. executives about turning him into a movie star, and he lambasts them on how stupid the idea is — art imitates life. In a surprise to nobody, basketball athletes don’t make the best actors (see Shaquille O’Neal). James struggles to display any genuine emotion outside disappointment, which matches the feeling of people watching at home.

The first “Space Jam” had likable character actors and some former NBA stars that helped audiences look past the flaws in the script. “A New Legacy” doesn’t have that luxury — in addition James, the only other actor who gets any real screen time is Don Cheadle. To his credit, Cheadle does his best to chew up every scene he is in, but he isn’t enough to carry the workload needed to make this an enjoyable experience.

Despite this being a film aimed at kids, the movie is full of humor and references to other Warner Bros. movies and properties only adults would understand, such as “The Matrix” and “Mad Max.” What audiences are given is a product that points and says “Remember this movie from 20 years ago? Please react.” The written jokes are references to outdated Internet memes that try to live off the legacy of the original.

The Takeaway: James already had the insurmountable task of trying to surpass Jordan’s legacy on the basketball court, and now “King James” will also go down as having the second-best “Space Jam” film, after his predecessor. “Space Jam: A New Legacy” turns a nostalgic journey into a soulless commercial for HBO Max.

See or Skip: The first “Space Jam” film didn’t hold up well over time but “Space Jam: A New Legacy” fails to hold up the second the credits begin to roll, while offering nothing beyond what Jordan already did.