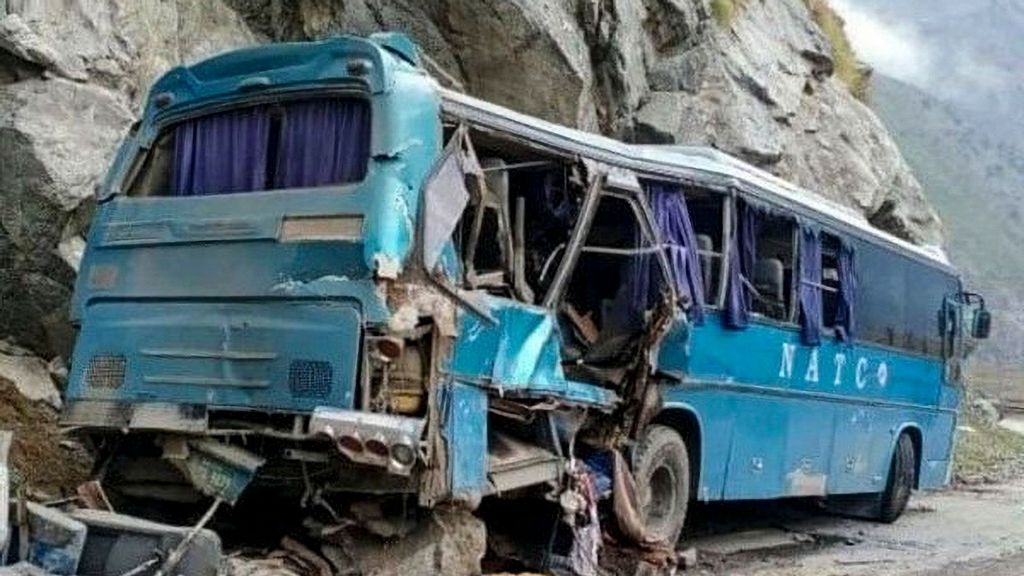 Visual of the bus involved in the accident in Pakistan (Photo Credit: ANI)

KOHISTAN, Pakistan — A blast on a bus in the Khyber Pakhtunkhwa region in northwest Pakistan on July 14 has killed 13 people, including nine Chinese nations.

The blast happened at around 7 am on July 14, when a Chinese company’s shuttle bus carrying working staff on the Dasu Dam Hydropower Dam Project—situated in the district of Upper Kohistan—was hit by a blast on its way to the construction site.

Initial reports on July 14 had put the number of dead at nine, including six Chinese nationals.

Pakistan’s foreign affairs ministry said the bus had fallen into the ravine after a “mechanical failure resulting in leakage of gas that caused a blast.” It said an investigation was underway.

But the Chinese foreign ministry is claiming it to be a bomb attack.

“China is shocked by and condemns the bomb attack in Pakistan’s Khyber Pakhtunkhwa province which caused Chinese casualties, mourns for the Chinese and Pakistani personnel killed in the attack, and expresses sympathy to their families and the injured,” Zhao Lijian, Chinese foreign ministry spokesperson, said.

“Pakistani security forces have taken measures to control the situation, properly transfer and treat the wounded. China has asked the Pakistani side to thoroughly get to the bottom of this as soon as possible, arrest the perpetrators, severely punish them and earnestly protect the safety of Chinese personnel, institutions, and projects in Pakistan,” Lijian said.

The Chinese Embassy in Islamabad has warned its nationals living in Pakistan to remain alert.

Part of the China-Pakistan Economic Corridor and built under Beijing’s Belt and Road Initiative, the Dasu Hydropower Project aims to connect western China to the Gwadar Seaport in southern Pakistan. One of the companies involved in the project is China’s Gezhouba Group.

The regional commissioner of Upper Kohistan said that following the incident, the local administration quickly moved to rescue the injured people and rush them to the hospital.

Deputy Commissioner Arif Khan Yousafzai said the incident took place early in the morning on a coaster carrying over 30 workers.

The Water and Power Development Authority confirmed that employees of a Chinese company were traveling in the bus, adding that rescue efforts were underway at the site of the incident, and the injured were being shifted to a hospital.

In 2018 Road Traffic Accidents Deaths in Pakistan reached 30,046 or 2.42 percent of total deaths. The age-adjusted death rate is 17.12 per 100,000 of the population that ranks Pakistan at number 95 globally, as per data provided by the World Health Organization.