Boeing 777 turns around and lands safely after it was battered by ice nuggets the size of tennis balls. 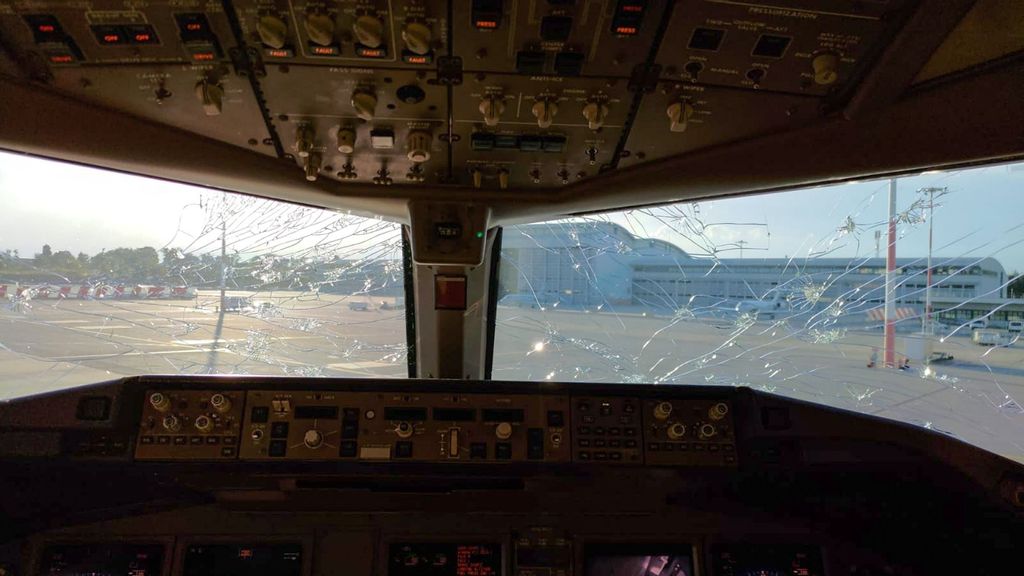 A hailstorm shattered the windshield of the Emirates Boeing 777 on its way from Italy to New York. (Vola Milano Malpensa/Zenger)

A wide-body jet traveling from Italy to the United States spent barely 90 minutes in the air before returning to its takeoff airport, after hailstones the size of tennis balls pummeled its cockpit, nose cone and wings.

The Emirates flight from Milan’s Malpensa airport to New York’s JFK International landed safely after circling for 90 minutes in a Boeing 777-31H aircraft to burn off fuel.

Emirates did not report any injuries during the July 13 flight, but photos taken on the ground showed the shattered cockpit windows, punched-in nose and hole-riddled fuselage.

The pilot reported entering a hailstorm at 15,000 feet over the Italian and Swiss Alps, according to Milan’s airports authority. Severe thunderstorms were reported across northern Europe at the time. “After about 97 minutes from take-off [the plane] returned to Malpensa,” the agency said.

The Emirates flight was to be a transatlantic journey, meaning the plane had a full tank of fuel. It’s standard practice to burn most of the extra fuel in a holding pattern to limit the possibility of an explosive touch-down if the hailstorm had damaged wing flaps or landing gear.

Airport officials said that strong winds continued to cause problems for the flight, which struggled to land and needed two attempts to get on the ground safely.

The passengers were transferred to a different flight the following day.

Emirates restarted flights to New York in June after a long pandemic pause, and has had daily flights to the United States during the month of July.

Hailstorms on the ground are experienced as downpours, like rain, because of gravity. But in the sky hail can erupt in many directions at once—and the impact at high speeds can be just as dangerous as other solid projectiles.

Boeing and Airbus passenger jet cockpit windshields consist of two layers, meaning a pilot can fly the plane with a crack in the outer panel if the inner windshield remains intact. But it can still cause visibility problems, according to the Flight Safety Foundation.

Storms could also damage a plane’s radome, the dome protecting radar equipment that’s typically positioned under the nose-cone. While a crippled radar antenna would create a challenge for aviators, it’s not inherently dangerous, the foundation says.

If hail were to enter an aircraft’s engine during flight, it could bend or break a compressor blade.  But jet engines are built to withstand high-speed impacts from larger objects including live birds.