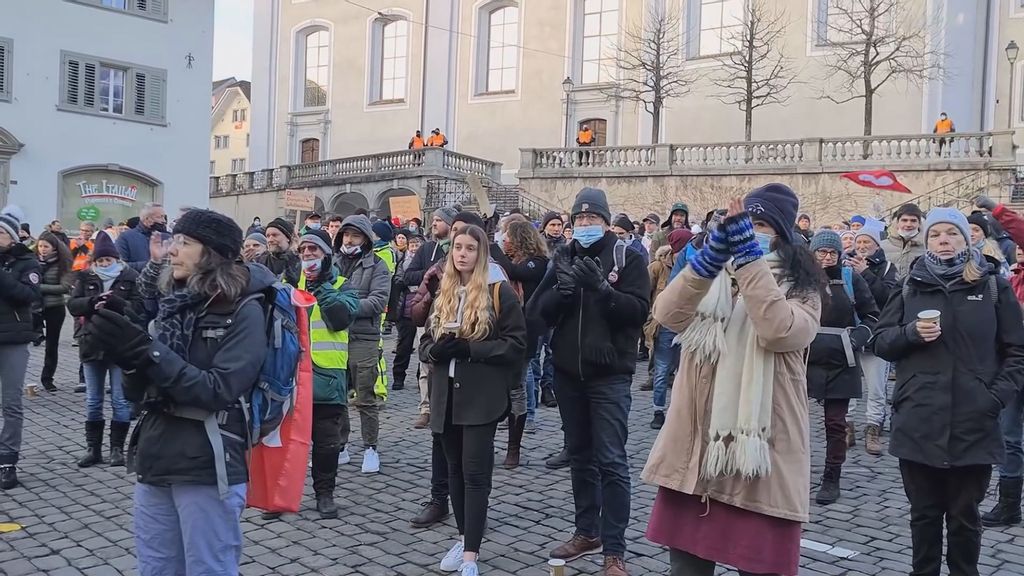 Scene from a YouTube video at a protest in Switzerland against COVID-19 restrictions. The German user's video was taken down by YouTube but later reinstated after a court order. (@eingeSCHENKt.tv, Joachim Steinhofel/Zenger)

In a victory for free-speech advocates, a German court dealt a blow to YouTube with a $118,000 (100,000 euros) fine for removing a video of large protests against COVID-19 restrictions in Switzerland.

The Higher Regional Court of Dresden ordered the fine on July 5 after YouTube deleted a German user’s video and did not reinstate it immediately after the court ordered it to do so on April 20. It was not until May 14 that YouTube re-posted the video, resulting in a fine from the court.

YouTube had deleted the video in January based on what it said was a violation of its medical disinformation policy on COVID-19.

“With the historically high fine, the Higher Regional Court makes it very clear that court decisions must be observed without restriction, regardless of whether YouTube assumes a violation of its guidelines or not,” attorney Joachim Steinhöfel, who represents the plaintiff — the account operator — posted on Twitter.

The German media platform complained of freedom of expression violations and filed a civil case.

“Defending freedom of speech against the Big Tech!,” said Steinhöfel. “Article 5 of our Constitution guarantees this fundamental human right, as the First Amendment of the U.S. Constitution does in the United States.

“Some social media outlets, however, believe that some non-elected officials in Silicon Valley have the prerogative to determine the communication standards of two billion people. That is not the case. So-called community standards do not override constitutional law.

“Social media companies have a long history of removing content that is legal because they disagree with the opinions expressed in said content.”

In the video, during a demonstration against coronavirus measures from the canton of Schwyz, Switzerland, a reporter interviews a citizen of Reich who said she believes “coronavirus is the same as any other previous flu,” and that the coronavirus risk is exaggerated.

YouTube took this exchange to be a violation of its misinformation policy, but the court ruled that the platform’s policy was not made clear to the German user. The amended guidelines had not been effectively incorporated into the contract with the account operator.

“The reporter does not adopt the interviewee’s theses as his own. To show how people think and argue is a primary task of journalism,” Steinhöfel said.

“Freedom of speech is always much more important, and it is a constitutional right of the citizens of this country. This outweighs the interests of the social media companies. These have their community standards, but German law overrides that, and they had to learn that the hard way.

“This is the first time a social media company has been fined such a high amount [in Germany]… for erasing the content a user has legitimately published and not obeying the injunction. In this sense, it is a landmark ruling and sends a clear message to Google, YouTube, Facebook.”

Google, the owner of YouTube, cannot challenge the ruling in a higher court.

“This is final. If they don’t [pay the fine], their managing directors can go to jail,” Steinhöfel said.

During the first quarter of 2021, a total of nearly 9.57 million videos were removed from the Google-owned video-sharing platform YouTube, according to data from Google.

The team at the German TV channel that posted the video said they “don’t see a cent” of the money; it goes into the state treasury.

“The amount does not go to the person concerned, it has to be paid to the judicial coffers,“ Steinhöfel said.