Like other cities with packed streets, Mexico City is often the scene of road-rage incidents. 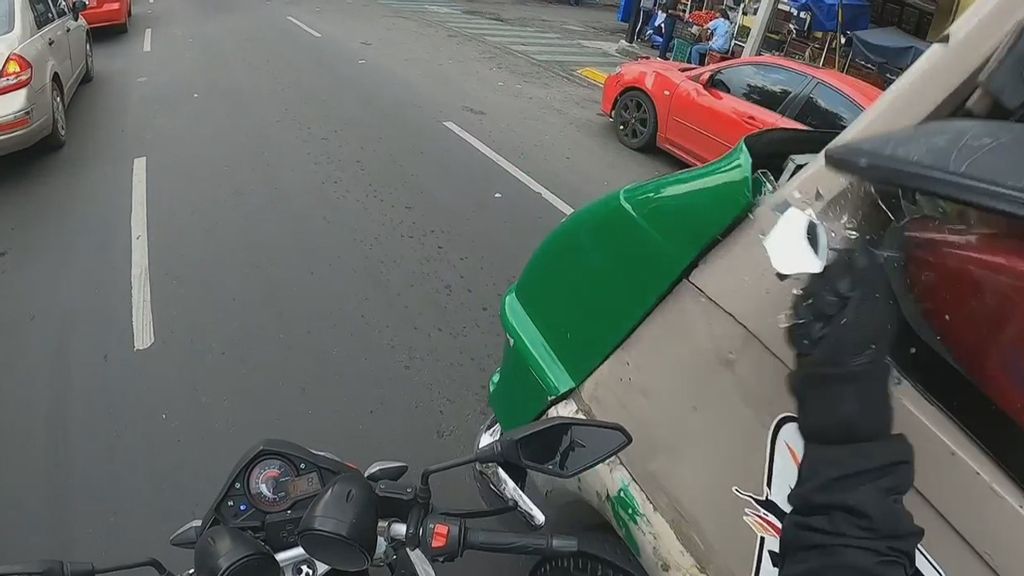 A motorcyclist smashed the rearview mirror of a public transport bus in Mexico City, after it nearly hit him earlier this month. (@diego.arrollosanchez/Zenger)

A furious motorcyclist filmed himself chasing a bus driver whose vehicle cut him off on a busy road. The video also shows the cyclist smashing the bus’ wing mirror with his gloved fist.

The July 6 incident was filmed by the biker’s GoPro camera in Mexico City, and the footage was subsequently shared on Facebook, where it went viral with 626,000 views.

In the biker’s GoPro footage, the bus is seen veering into the motorcyclist’s lane and nearly ramming him into a stationary taxi, parked in a lane on a busy road.

Incensed, the biker speeds after the bus driver and catches up with the vehicle in a traffic jam.

While passing in between the bus and another vehicle, the biker raises a fist and wallops the wing mirror, sending shards of glass flying onto the road.

The biker then accelerates away, weaving through traffic.

It’s unclear if the local authorities are aware of the video and intend to investigate the matter.

Many netizens defended the biker’s actions with some relating similar stories. However, some online commentators felt the biker overreacted and point out he also broke the law.

Such road-rage incidents are fairly common in Mexico City and other cities whose heavy traffic often translates into major snarls. C40  (a network that includes Mexico City and other megacities around the world committed to addressing climate change) estimated that in late 2015, there were more than 5 million automobiles on the city’s streets, aside from buses.

One possible answer to decreasing the jams caused by four-wheelers is to integrate more two-wheeled — and non-motorized — bikes into the mix, say city planners.

ECOBICI, Mexico City’s bike-sharing program, has seen a big uptick in popularity, with the number of daily trips increasing from 3,053 in 2010 to 33,700 in 2015. (More recent figures are not available) The system boasts 6,025 bikes at 444 docking stations across 42 neighborhoods of the city.

Founded in 2010, ECOBICI “allows registered users to take a bike at any bike station and return it to the bike station closest to their destination with unlimited 45-minute trips. Anyone who wants to access to the ECOBICI system can pay a subscription for one year, one week, three days or one day.”

Mexico City has about 93 miles of dedicated bike lanes, and they may be the best way to travel through the traffic-filled streets. The bike lanes accords easy access to the Historic Center, Reforma Avenue, Polanco, Condesa and the Roma neighborhoods.