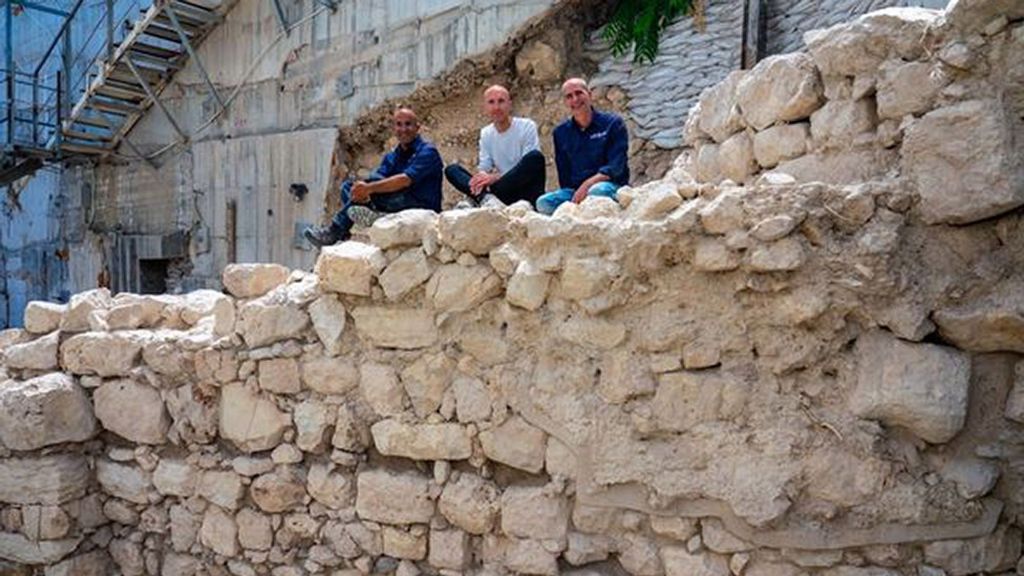 The excavation directors sit on the exposed section of the First Temple-era protective wall on Jerusalem's eastern side. (Yaniv Berman, Israel Antiquities Authority/Zenger)

Archaeologists are questioning the Old Testament account of the destruction of King Solomon’s Temple after a missing section of the original temple wall was found during a Jerusalem dig. The discovery indicates Babylonians didn’t completely destroy the wall as the Hebrew Bible says.

Also known as the First Temple, the structure was completed during Solomon’s reign in 957 B.C.

In a dig supervised by Filip Vukosavovic, director of the Ancient Jerusalem Research Center, a section of the fortification has been uncovered in the City of David National Park, casting doubt on the biblical narrative that it was torn down on every side.

“The entire Chaldean [Babylonian] force that was with the chief of the guard tore down the walls of Jerusalem on every side,” according to the Second Book of Kings, chapter 25, verse 10.

The newly excavated portion of the city wall links two previously unearthed sections, suggesting the entire eastern wall was not actually destroyed by the invading Babylonians, but probably breached and overrun.

Archaeologists working with Vukosavovic have been able to reconstruct the wall that protected the city until its eventual destruction, marked by the Jewish annual fast day Tisha B’Av. This year’s observance was July 17–18.

After linking sections found by British archaeologist Kathleen Kenyon in the 1960s and by archaeologist Yigal Shiloh in the 1970s, researchers discovered there was a near-continuous 200-meter wall on the City of David’s eastern slope. It is unknown if those fortifications were built before an earlier siege by the Assyrians in 701 B.C.

Vukosavovic said the new section of the wall is around 16 feet thick and up to 9 feet tall.

“With the current exposure of the section that almost physically connects between the two [previous sections], it is clear there’s a wall that’s running for hundreds of meters,” Israel Antiquities Authority excavation co-director Joe Uziel told The Times of Israel.

“We’ve put the discussion almost to an end, although archaeologists do love to argue, but it seems like we have the run of the First Temple fortification,” Uziel told the Times.

Uziel’s colleague Ortal Chalaf said the wall protected the city from many attacks during the reign of Judah’s kings, until the Babylonians conquered the city in 587 B.C.

Other archaeologists in recent decades have found remains of the ruins during digs, and some sections still remain standing.

In a building excavated nearby, Vukosavovic’s dig revealed broken storage jars with rosettes stamped on the handles, common in the Kingdom of Judah’s final years.

Researchers on his team found a stone Babylonian seal near the wall, featuring a figure and two symbols of the Babylonian gods Nabu and Marduk. They also unearthed a clay seal-stamp impression with the Judean name “Tsafan,” one of a number of seal impressions from this period already known to archaeologists.

Uziel said the name Tsafan appears on other clay seals found in the city and believes they are linked to governing officials of the Kingdom of Judah.

An earlier version of this article omitted attributions of two direct quotes from interviews conducted by The Times of Israel. Zenger regrets this error.