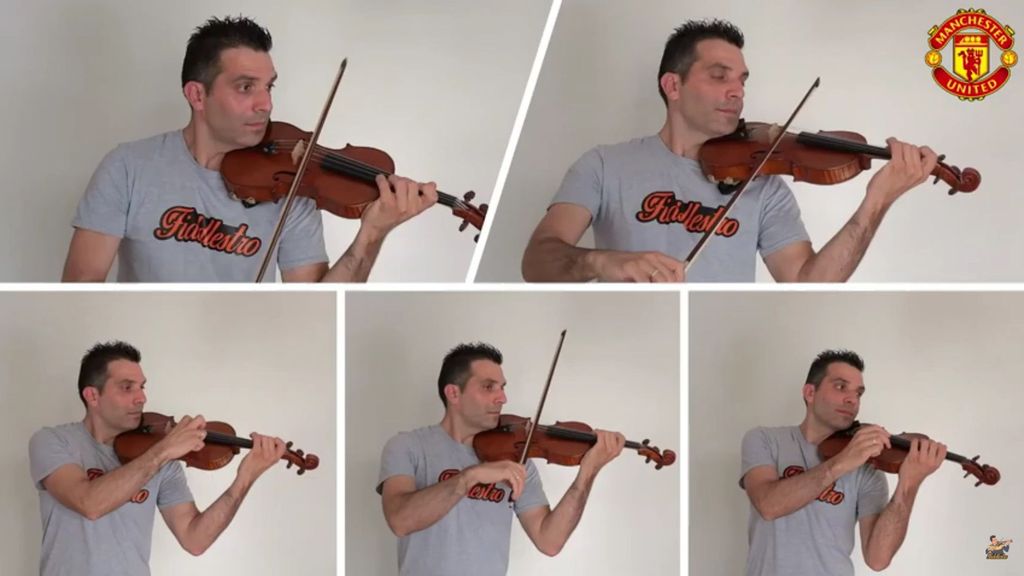 Triantafyllos Vavatsikos, from Athens, Greece, plays the chants of popular soccer clubs on a violin for his YouTube channel. (Fiddlestro Channel/Zenger)

A Greek musician with nothing else to do during lockdown recorded himself playing different tunes on the violin and then put them together to create the anthems from soccer clubs like Manchester United and Liverpool.

Triantafyllos Vavatsikos, who comes from the Greek capital Athens, works as a violin teacher at the National Conservatory in an Athens suburb called Eliopoulis, and he has been teaching students how to play the instrument for 14 years.

Vavatsikos, who goes by the name Fiddlestro, shares videos on YouTube of him playing club anthems for teams such as Manchester United, Liverpool, Real Madrid, and Barcelona on the violin.

He specializes in fugue and counterpoint styles of composition. Fugue, or fuga, involves systematic imitation of a musical theme with an accompanying melody. Counterpoint compositions artistically combine two or more separate melodies.

“I came up with the idea of playing team anthems during the COVID-19 lockdown period,” he said. “As I like watching football and basketball, I thought I could combine them to music. The exceptional common element that the teams have among other elements is music, I thought.”

Triantafyllos created his YouTube account on April 14, 2021. His most viewed video, a violin cover of the Athletic Union of Constantinople, or AEK, anthem, has garnered over 8,200 views since May 14.

He said that performing all the elements of the football club anthems himself was satisfying, yet difficult. When he has the chance, he enjoys performing in-person with other artists and a crowd.

Most notably, the biggest stage he has performed at is The Odeon of Herodes Atticus, or The Herodion, an ancient Roman theater built from stone. The open air theater has a capacity of 5,000 people. He performed there in 2017 with internationally known musicians, including British violinist Vanessa-Mae.

“I was one of the violinists of the Greek orchestra which accompanied ‘The Queen of the Violin’ Vanessa Mae who lit up the stage in one of the most anticipated concerts in Greece,” Triantafyllos said.

“We all admired her unique repertoire that includes both classical and pop music,” he said.