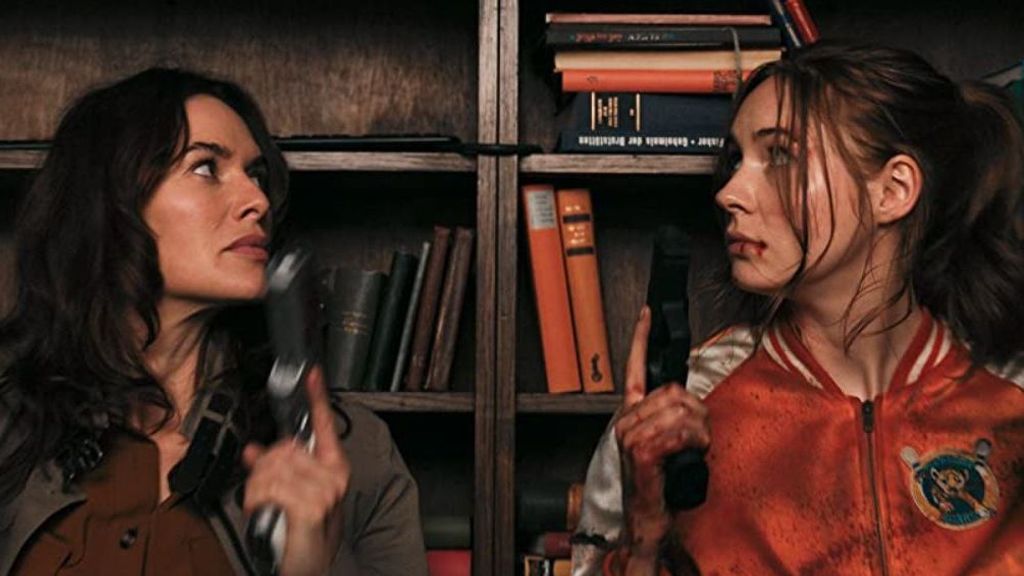 We have reached the point where “John Wick” has gone from a standalone franchise to its own genre of ultra-violent shoot-’em-up films. But when everyone starts producing “John Wick” clones, how do you separate yourself from the pack?

Netflix decided to try an all-female shoot-’em-up with actress Karen Gillan in the lead role. Add in big-name actresses Lena Headey, Angela Bassett, Michelle Yeoh and Carla Gugino and it all adds up to a recipe for success, right? Unfortunately, wrong.

While “Gunpowder Milkshake” manages to match its “John Wick” inspiration in violence and pretty colors, it loses everything else in translation.

The Story: “Gunpowder Milkshake” begins as a story of a professional assassin named Scarlet (Headey). One night, Scarlet is marked for death and forced to abandon her teenage daughter Sam (Gillan) for the safety of them both.

Fast-forward 15 years, Sam has filled her mother’s shoes by becoming a cold-blooded hitwoman and working for the same agency, known as “The Firm.” After botching a mission that inadvertently led to the death of a high-profile person, Sam is forced to take the place of a man trying to save his young daughter, Emily (Chloe Coleman), in a money exchange.

But the exchange is everything but simple and Sam finds herself in the middle of a gang war without any allies. Sam must join forces with a group of former hitwomen known as “The Librarians” to wage war against the men who took everything from them. But they all have to deal with one wild card, Sam’s mom.

Bright Spots: “Gunpowder Milkshake” is a roller coaster and the best bits occur in the opening hour before going downhill in the final hour. Michael Seresin is the man responsible for the film’s stylistic look, which is neo-noir in its presentation much like “John Wick.” While the style can be knocked as overdone, it doesn’t take away from how well the film is shot and how well the vibrant colors match the mood of the early setting.

There is a solid mix of entertaining action sequences and creative humor. A hilarious scene in which Sam takes on a trio of goons in a hospital is arguably the best the film has to offer. At its strongest, “Gunpowder Milkshake” toes the line of over the top without going over it. Headey doesn’t take up a large chunk of the film, but she is easily the best actor with the best character progression.

Sadly, a solid beginning is squashed with a mediocre attempt at creating a badass action film for ladies.

Weak Spots: As creative as the set pieces and action sequences are, “Gunpowder Milkshake” quickly loses steam the second it asks its audience to take the film seriously. Gillan isn’t exactly miscast in the lead role, but she struggles to convey the serious aspects of her character. She is exceptional when it comes to the comedy and lighthearted moments, but she is a tough sell as a stone-cold assassin with abandonment issues.

Navot Papushado wrote and directed this film without much experience on his resume. Papushado begins to lose the plot when it’s time to deliver the action portion of this action-thriller by going headfirst into generic gunfights. In a world where a massive criminal organization runs everything, none of them decide to bring a gun to kill one of their best assassins. The lack of a strong antagonist is filled by an endless supply of male goons whose only purpose is to be bullet magnets.

The“men-versus-women” theme is very much present here, as all the women in the film are heroes while all the men are villains. Papushado doesn’t beat you over the head with the narrative of a society of men controlling women, but it isn’t subtle either. Ultimately, the film abandons the themes that worked in favor of becoming the “John Wick” clone it was advertised to be.

The Takeaway: “Gunpowder Milkshake” does many things right but fumbles its premise down the stretch. The end result is a middling film, and whether its positives outweigh its negatives is for viewers to decide.

See or Skip: “Gunpowder Milkshake” is worthy of a watch, especially given Netflix’s track record with quality, but audiences will likely be split, as the story is anything but even.