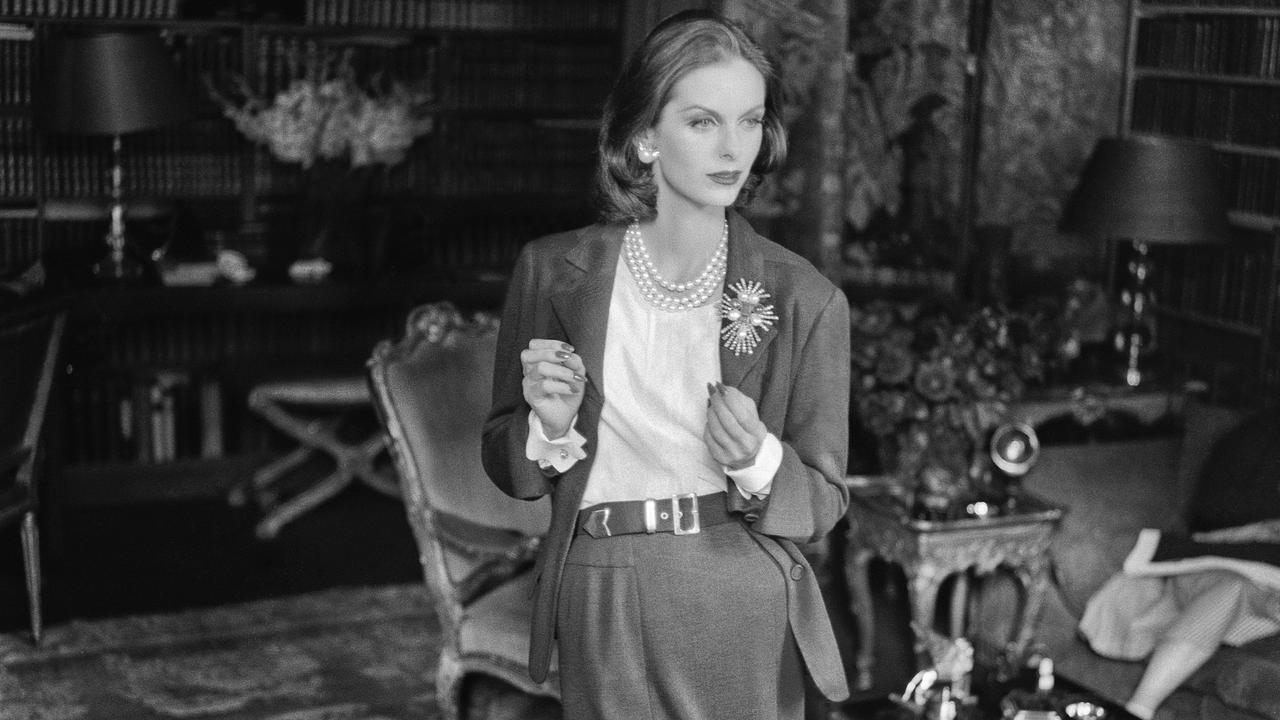 A new exhibition will showcase the works, such as this, of French designer Gabrielle Chanel. (AAP Image)

MELBOURNE, Australia — Gabrielle ‘Coco’ Chanel — the eponymous founder of luxury fashion brand Chanel — was born poor and illegitimate in central France’s Loire Valley in 1883 and died at the Ritz in Paris in 1971 at the age of 87.

In between, she formulated a daring new wardrobe for women in the modern world and founded a fashion house that remains one of France’s most prized luxury brands.

She also cultivated a public image that embodied the values of freedom and independence with which she sought to imbue her designs.

A new exhibition opening at Melbourne’s National Gallery of Victoria on December 5 considers her contributions to fashion over six decades and the ongoing reach of her legacy.

Hailing from the Palais Galliera fashion museum in Paris, Gabrielle Chanel: Fashion Manifesto brings together 117 garments and 75 items of jewelry alongside cosmetics, perfumes and accessories in what is an unprecedented exploration of the designer’s vision.

“Gabrielle Chanel is familiar to us but in very particular ways,” National Gallery of Victoria curator Danielle Whitfield says.

“There is her biography — the drama of her life — but her professional life was incredibly pioneering.

“Her manifesto was radical for the time because it said, ‘I am a woman, this is how I want to dress.’ In the early 20th century women were working, traveling and holidaying. They were increasingly emancipated and she gave them a wardrobe to suit that new experience. Her proposal—her manifesto—was liberated femininity.”

Chanel’s easy-to-wear designs conveyed a mood of optimism and casual elegance. The couturier mined the codes of menswear and sportswear to create clothes that women on the move wanted to be seen in.

Significantly, in the aftermath of the Great War, she repackaged ‘mourning black’ for a new generation of women keen to leave behind the corsetry and excessive ornamentation of Belle Epoque fashion (1871-1914).

“There’s a room dedicated to the emergence of the ‘little black dress’ in the late 1910s and early 1920s, and how it became an emblem of modernity,” Whitfield says.

Also on display are iterations of the classic Chanel tweed suit in woven tweed or wool boucle, and examples of her ‘romantic’ evening wear from the 1930s, including a white lace evening dress from 1933, recently gifted to the gallery by Krystyna Campbell-Pretty and family.

“In this phase of her career, Chanel used lace, tulle, and embroidered organdie to inject greater delicacy into her work,” Whitfield says.

Working towards the opening of the exhibition, Whitfield has been struck by just how contemporary many of Chanel’s designs are.

Early on in her career, when money was tight, the designer used cheap jersey fabric, traditionally used to make men’s underwear, but stuck by it for its comfort, utility, and the way it draped on a woman’s body.

“The principles by which she designed — ideas about simplicity, function, and comfort — still have resonance today,” Whitfield says.

In this light, it’s tempting to view Chanel as a blueprint for the modern, self-determined woman, a fashion maverick who turned her back on the restrictions of the past and instead embraced autonomy and independence.

Yet her life was more complicated than that.

Chanel conducted affairs with a series of wealthy, high-profile lovers. These included British landowner Hugh ‘Bendor’ Grosvenor, the 2nd Duke of Westminster, who was an admirer of Hitler, and Grand Duke Dimitri of Russia, who had gone into exile in France following his role in murdering Rasputin in St Petersburg.

Such couplings arguably revealed more about her precarious start to life—following her mother’s death from tuberculosis when was 12, Chanel was placed in an orphanage by her pedlar father and raised by nuns until she was 18—than they did her taste in men. They also contributed to a perception of her as a social climber.

Perhaps most damaging to her profile, however, was her documented relationship with a German officer, Hans Gunther von Dincklage, during World War II in Paris.

According to research by Hal Vaughan in his 2011 book “Sleeping with the Enemy: Coco Chanel’s Secret War”, she worked as an intelligence operative on Nazi missions. She even had an agent number and the code name ‘Westminster’, because of her previous affair with the Duke of Westminster.

Whitfield states that the exhibition’s curators, Palais Galliera‘s director, Miren Arzalluz, and head of collections, Veronique Belloir, acknowledge research into Chanel that has emerged over the past decade.

“Their feeling was that biographies have been written, and films and musicals made, but that their role as a fashion museum was to look at the innovation of the work and think about its legacy,” she says.

“Chanel is a complex figure but also an influential one, so that’s where the remit lay, in trying to understand what made her such an important designer,” Whitfield said.

“There hasn’t been a comprehensive retrospective of the work of Gabrielle Chanel to date and this was an opportunity to look at the founder of the house.

“Chanel propelled us into a different way of thinking about why we wear what we wear and what that should look like.”

The National Gallery of Victoria hopes the allure of the iconic interlocking Cs builds on the success of its most recent major fashion exhibition, The House of Dior: Seventy Years of Haute Couture in 2017, which drew audiences of more than 275,000.

Gabrielle Chanel: Fashion Manifesto will be at the National Gallery of Victoria from Dec. 5 to April 25, 2022.