Excited pup slipped in the rain and decked his keeper. 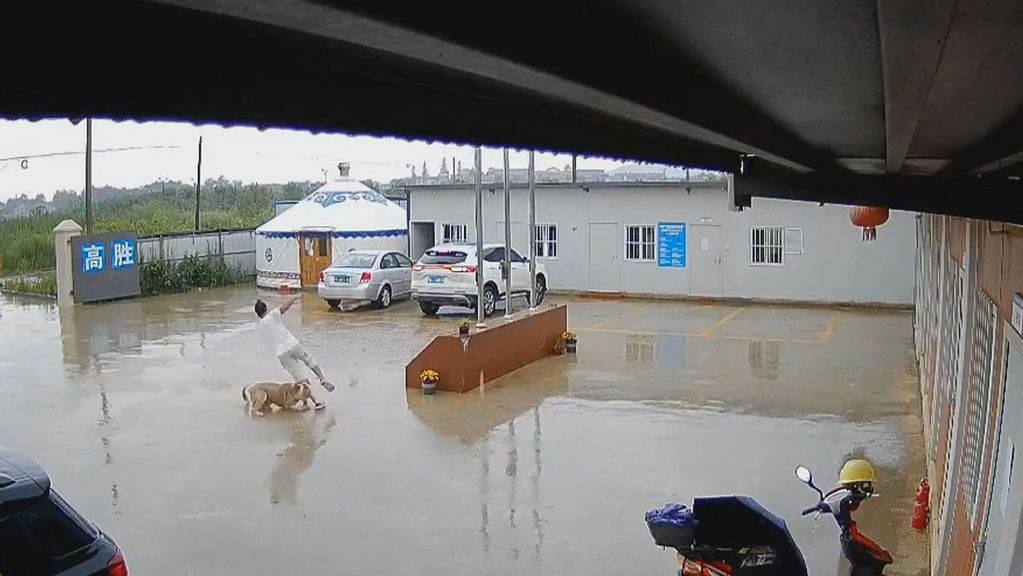 An overenthusiastic dog sent its master flying after it bounded over to greet him in the morning — and skidded on the wet ground.

The incident happened at a house in Huzhou in China’s Zhejiang Province when the man, Mr. Lin, walked into the parking lot with a cigarette in his mouth, on July 9.

He started to walk across the wet parking lot in his sandals when he was spotted by the large dog, which bounds over enthusiastically to greet him. But when it tries to stop in front of him it slips on the wet ground and knocks the man’s feet out from under him.

The man can be heard groaning as he crashes to the ground and is clearly in pain as he lies on the wet surface in his white T-shirt and white trousers.

The excited dog, then very much calmed down, stood next to him and sniffed his body as if aware that it was the reason for his owner’s tumble. A smaller dog can be seen as well, running over to the prone man.

Several studies have shown dogs are able to sense human illness and emotion, making them useful for law enforcement, therapy and service work.

In 2016, researchers at the University of Lincoln, in England, and University of São Paulo, Brazil, found that with no training, dogs could effectively use their senses to identify positive and negative emotions in humans.

The man said after the video went viral that he wasn’t annoyed with the dog, as it was just happy to see him. He does not blame the dog for the unfortunate consequences.

Online commentators compared the dog’s mad dash to a flying tackle in football, where a player dives or throws their body through the air to tackle the ball-carrier.

Others joked that the dog’s brakes failed, causing the dog to skid like a hydroplaning car into its owner.

But some said the incident wouldn’t be so funny if it was an old woman or a child.

While a 2017 study published in BMJ Open found that only 1 percent of respondents in Hong Kong households experienced a pet-related injury, women were more likely to be injured than men.

Meanwhile, another study published in Scientific Reports a year earlier found that 15 percent of child respondents from two cities in southern China experienced a dog- or cat-induced injury.

To prevent a repeat of the incident, commentators urged the man to keep the dog on a rope in the future.