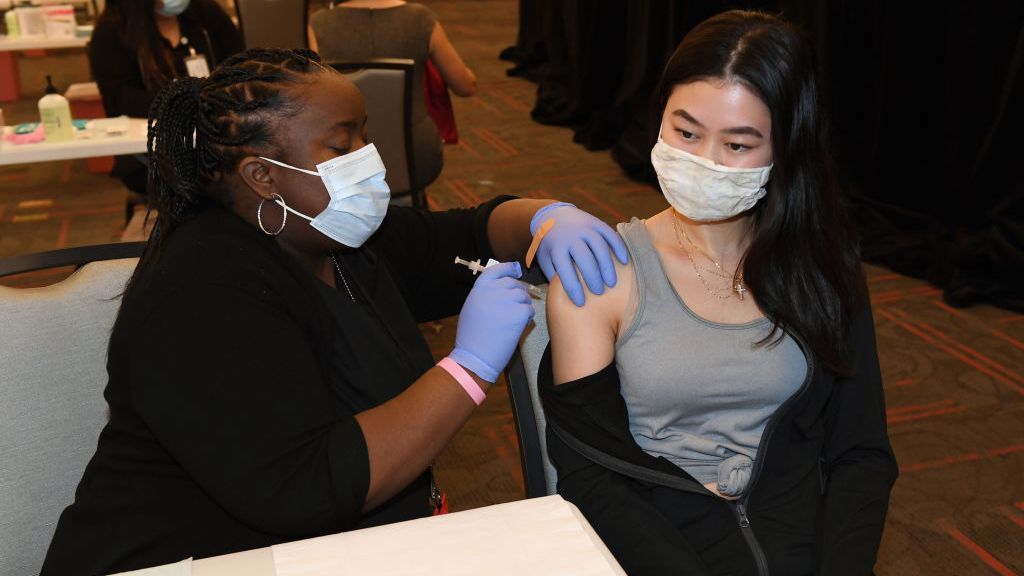 A medical assistant administer the Pfizer vaccine to a student at the University of Nevada - Las Vegas on Jan. 12. (Ethan Miller/Getty Images)

Two of the largest U.S. public college systems will not mandate COVID-19 vaccines for students returning to campuses for the upcoming Fall semester until the Food and Drug Administration (FDA) upgrades the vaccine approvals beyond an “emergency” stage.

The California State University system (CSU) and the State University of New York system (SUNY) have both announced “pending” vaccine mandates that will go into effect when the FDA finally grants full approval to any one of the three COVID-19 vaccines, which are currently authorized only under less strenuous emergency-use rules.

The decisions will impact more than 800,000 students.

The Pfizer and Moderna mRNA vaccines were both granted emergency-use approval in December. Pfizer then announced in May it had begun the process for full approval using a “priority review,” and Moderna followed suit a month later. A priority review is meant to take six months — four months shorter than a standard review, according to the FDA.

That would mean the CSU and SUNY systems would have no mandates until November.

Despite this, both systems are still encouraging students and employees to get vaccinated prior to the start of the Fall semester, if they are able to do so — and both of their pending mandates, when implemented, will allow exemptions for religious or medical reasons.

SUNY Chancellor Jim Malatras last week published an op-ed in USA Today calling on his students to get vaccinated to allow for “return to normalcy” on campuses from Fall.

“This is my plea to students as well as faculty and staff: don’t wait to make your decision until the state mandate becomes official,” Malatras said. “Take back control now. Don’t leave yourself in limbo in mid-summer, still unsure what your fall semester will look like.”

“Continued vigilance will further mitigate the spread of the disease,” Castro said in an April 22 statement. “We will continue to strongly encourage all members of our respective university communities to receive a COVID-19 vaccination as soon as it is available to them.”

The details and language of the mandates are also still being negotiated with student and employee unions at both university systems. Both systems intend to release the policy prior to full FDA approval so that it can go into effect immediately after approval is granted.

As the language stands, when the SUNY mandate goes into effect, employees would not be required to get vaccinated. The CSU mandate, on the other hand, will include employees.

To explain the delay in a mandate, New York Gov. Andrew Cuomo has said public college systems cannot legally mandate vaccines that have only been approved for emergency use, citing a statute in the U.S. Code that says individuals given a medical product granted only emergency-use approval must be informed of their option to refuse the product.

David DiPietro, a Republican member of the New York State Assembly, also sponsored a bill in April that would prohibit mandatory COVID-19 vaccinations at all and enact a “vaccine bill of rights.” The bill has been referred to the Health Committee of the State Assembly.

As a public entity, she explained, SUNY universities have to follow state guidance regarding the vaccine mandate. Mike Uhlenkamp, a spokesperson for the CSU Chancellor’s office, said only that the CSU vaccine mandate was pending complete FDA approval.

For students and their parents, the delayed mandate has brought mixed reactions.

Andrea Santana, a medical social worker whose daughter will be a freshman at California Polytechnic State University, told Zenger the value of mass vaccination was clear to her.

“I feel that the vaccine is helping and working,” said Santana. “I see it firsthand in the number of people hospitalized who are vaccinated versus people who aren’t.”

Yet some students say they understand the need to wait for complete approval before putting in place rules that would force their peers to get a jab to continue their studies.

“I lean toward that waiting for six months is necessary,” said Jing Tan, a junior at Stony Brook University in New York, “but the approval becomes less meaningful going past September.”

Tan told Zenger that she still holds out hope that the FDA priority review is expedited, so her school can require all students to get vaccinated before the new semester starts.

However, Tan added, that it was not a major concern for those who have got the jab.

“I feel safe enough to return to campus because I have been vaccinated myself.”

Three university students at Chico State have also already filed a federal lawsuit against CSU and eight other state and federal defendants, seeking to block the mandate. The three students, who have all recovered from COVID-19 infections, are arguing not enough evidence exists to prove the vaccine is safe for those who had the virus, according to their filing.

The attorney representing the students did not respond to request for comment.

Including schools waiting for full FDA approval to implement their mandates, some 572 colleges across the U.S. plan to require students or employees to get vaccinated, according to the Chronicle of Higher Education. Those who have announced mandates have joined the White House’s “COVID-19 College Vaccine Challenge,” in which schools have pledged to organize and educate their communities about vaccine access and provide access to jabs.

Vaccination rates among adults ages 18–34 in the U.S. have been lagging, according to the Centers for Disease Control and Prevention. Out of all age brackets, college-aged adults (18–24 years) were least likely to report having received a COVID-19 vaccine.

They were also most likely to report being unsure about getting vaccinated.

Uhlenkamp noted that 14 of 23 CSU campuses in fact serve as vaccination sites and that overall vaccination rates in California have been steadily increasing.

“It just means we need to be more communicative with regard to the vaccine,” he said. “We’re going to continue communicating with those people on the importance of getting vaccinated.”