VIDEO: I’ve Come For My Paw: Cops Save Dogs Locked In Parked Car At A Wild West Casino

Heatwave heroes save mom and her pup after smashing their way into a car left in stifling heat.
By Andreea Tabarcea July 13, 2021
Facebook
Twitter
Linkedin
Email 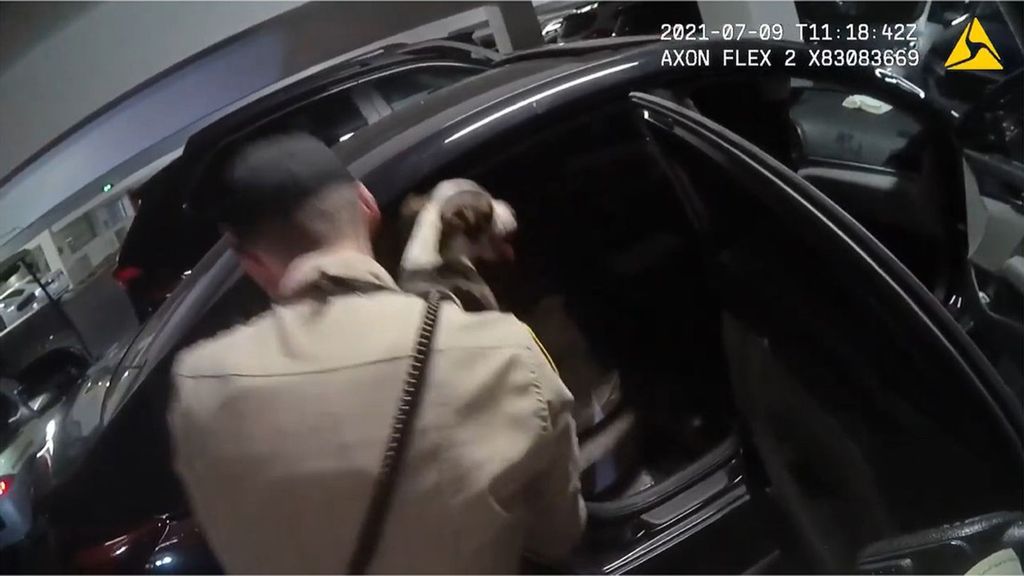 A dog was rescued from a vehicle in dangerous heat by a police officer outside of Wild Wild West Gambling Hall, Tropicana Ave., in Las Vegas, Nevada, on July 9, 2021. (Las Vegas Metropolitan Police/Zenger)

Las Vegas Metropolitan Police officers rescued a mother dog and its puppy trapped in a car for a long time without any water in the hot summer weather.

Even though the car was in a covered car park, the temperatures were still sweltering in the confined space.

The security team at the parking garage in Las Vegas, Nevada, noticed the mother dog and a puppy in distress in the back seat of a parked vehicle on July 9.

The observer called the authorities to help the animals, and when officers arrived, they realized that the two pets were struggling for breath and panting inside the car in which the air conditioner was turned off.

Cops then smashed the front window and recovered the mother dog and puppy.

According to the footage, the rescued dogs can be seen tired, confused, and panting although the sunroof and rear windows have been left slightly ajar.

Both dogs were put in the officers’ patrol car and transported to a safe place to receive the necessary care.

“Do not leave pets in the heat,” the Las Vegas Metropolitan Police warned.

According to the police, no arrests have been made.

The name of the owner and the consequences were not disclosed when sharing the video.

Las Vegas Police stated that the investigation is ongoing.

Nevada law makes it a misdemeanor to leave a pet unattended inside a vehicle “if conditions, including, without limitation, extreme heat or cold, present a significant risk to the health and safety of the pet.”

Thirty-one other states have similar statutes, which vary in who can rescue animals under dangerous conditions. Fifteen states let anyone rescue a distressed animal. In Nevada, only public safety officers and animal control officers can undertake rescues.

The first mission involved rescuing a small dog that was trapped inside a vehicle near the Las Vegas Strip for five hours.

When the officers got there, they broke the car window and took the dog out. They offered him water and a cool place to rest, after which the animal felt better.

The same day, Las Vegas police reported that officers were called to rescue a dog in distress inside a hot vehicle at a Goodwill parking lot on Flamingo and Fort Apache roads.

The police broke the window and recovered the dog that was taken by the animal control. The owner who was shopping at the time was arrested.