VIDEO: Dinosaurs Emil And Emily, Unearthed In Switzerland, Go On Display In Germany 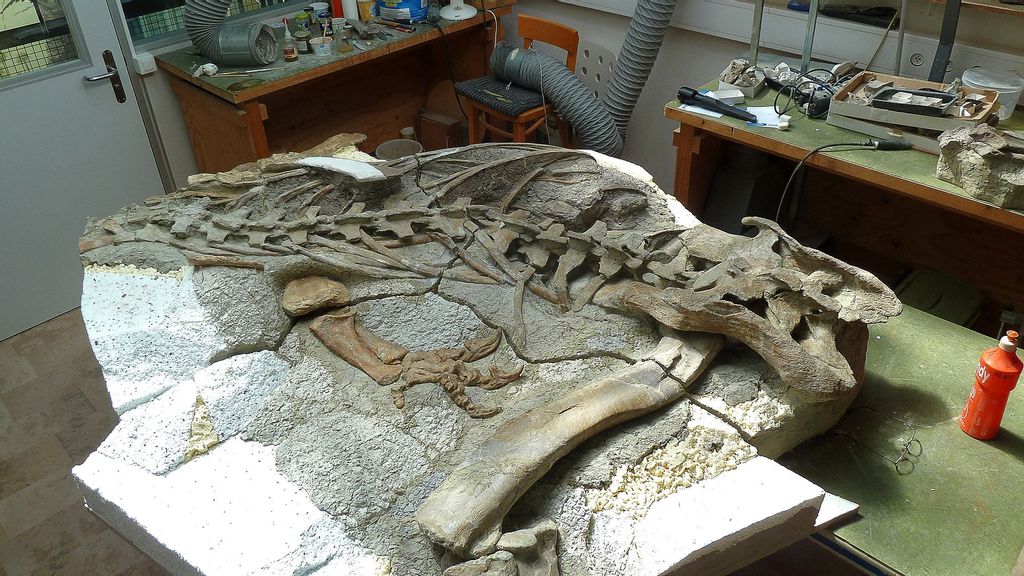 Remains of the Plateosaurus specimens Emil and Emily, discovered at an excavation site in Switzerland, will now be exhibited in Germany. (Dinosaurier-Park Munchehagen/Zenger)

The bones of two 210-million-year-old dinosaurs unearthed in Switzerland are now on display at a dinosaur park in Germany.

The two dinosaur skeletons, which belong to the Plateosaurus genus and consists of over 330 bones, went on display at the Munchehagen Dinosaur Park in the town of Rehburg-Loccum in the German state of Lower Saxony on July 6.

Park scientific director Nils Knotschke said the reptiles, named Emil and Emily, are direct ancestors of the long-necked sauropods, considered to be the largest land animals of all time.

The fossils, which are estimated to be around 210 million years old, come from the Gruhalde clay quarry located near the Dinosaur Museum in the municipality of Frick in Switzerland.

The quarry is considered to be one of Europe’s most important excavation sites from the Triassic Period and has so far provided over 80 dinosaur finds that remained stuck in the clay for over 200 million years. The Triassic was the first period of the Mesozoic Era, also called the Age of Reptiles, and there are many bones like this to be found at the Gruhalde Quarry.

“It is a dinosaur mass grave,” Knotschke joked, to emphasize the importance of the quarry.

Usually the Americas and Asia are most known for quarries of this significance, but this one is situated in the middle of Europe and has plenty of archeological potential.

Besides being a significant archeological site, Gruhalde clay quarry is open to “young geologists” who want to look at fossils. A special area is set aside for those who want to hunt for fossils on their own and is suitable for children of all ages to experience. The quarry is a significant tourist site, but it’s not necessary to pre-book — one can arrive and simply start their search.

Emil and Emily were herbivores belonging to the Plateosaurus trossingensis species, and were 20 to 26 feet (6–8 meters) long. Knotschke said the assembly of the 330 bones, which were wrapped in protective plaster coats during their transport from Switzerland, will take over three years. However, as that process goes on, visitors at Munchehagen Dinosaur Park can observe how the fossils are uncovered piece by piece from the rock and connected together.

The Munchehagen Dinosaur Park is a privately operated open-air museum spanning 22 acres (9 hectares) and was opened in 1992. It opened an exhibition named ‘Plateosaurus: The Origin of the Giant Dinosaurs’ where enthusiasts will be able to see Emil and Emily.