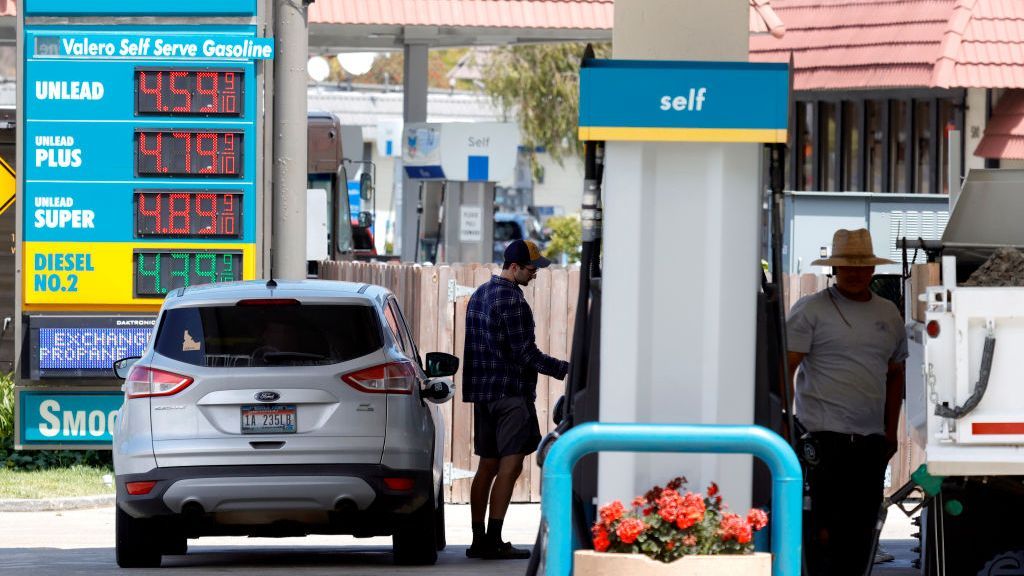 A customer prepares to pump gasoline into his car at a Valero station on July 12, 2021 in Mill Valley, California. The statewide average in California is $4.30, the highest average in the state since 2012. (Justin Sullivan/Getty Images)

As U.S. gasoline prices continue rising, consumer demand appears to finally be letting up and prices could eventually fall below $3 per gallon by the autumn, analysts told Zenger.

Travel club AAA reported a national average retail price of $3.15 for a gallon of regular unleaded gasoline on Tuesday, slightly higher than last week. Much of the price has been supported by pent-up demand, the reopening of the U.S. economy and higher commodity prices.

Gas prices at multi-year highs did little to dent consumer demand, particular during the long July 4 holiday weekend. Federal data on implied demand for gasoline even set a record, though Patricia Hemsworth, a senior vice president at Paragon Markets, told Zenger that data can be sometimes skewed by three-day holiday weekends.

The implied demand figure offered by the U.S. Energy Information Administration, part of the Energy Department, came in last week at around 10 million barrels per day, the highest ever.

But Tom Kloza, the global head of energy analysis at the Oil Price Information Service (OPIS), said that figure was “nonsense.” Recent figures on implied demand, he said, were likely below the 10 million barrels per day mark.

“Bottom line: OPIS believes we have not yet seen a driving season week where demand has topped 2019 levels,” he stressed.

Another metric, the total volume of refined petroleum products supplied to the market on any given week, is often used as another barometer to gauge demand. For the week ending July 2, the Energy Information Administration reported total products supplied over the last four-week period averaged 20.9 million barrels per day. That is precisely the same figure as the similar week in 2019, which coincidentally was virtually unchanged from the similar week in 2018.

Despite the nuances, Patrick DeHaan, the senior petroleum analyst at GasBuddy, said that while demand does seem to be falling off from July 4 levels, it’s still pretty strong, adding he doesn’t see much of a case for higher movements on prices at the pump.

Seasonal trends do support that as demand usually tapers off after the July 4 holiday, but it won’t be abrupt.

“I think we’ll see a gentler downturn in demand than we usually see, but I still think we fall back under $3 per gallon nationally this fall,” he said.

Prices for most goods, not just gasoline, are on the rise.

A Tuesday report from the Labor Department showed consumer prices increased nearly 1 percent from May to June. Year-on-year and prices are up 5.4 percent, the biggest 12-month spike in more than a decade.

For just gasoline, however, prices are up about 45 percent over the last 12-month period.