For A City Battered By Hurricanes, Close-Knit Community Is The Only Way To Survive 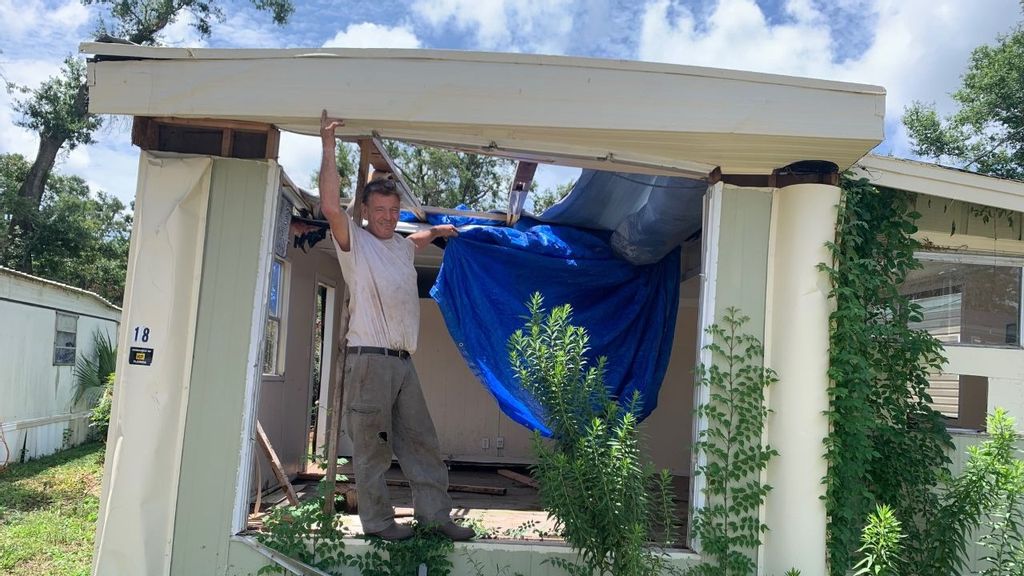 Richard Hogarth, a resident of a Pensacola trailer park, shows off the damage sustained by a home due to a recent hurricane. (Hamil Harris)

PENSACOLA, Fla. — From here far west in the Florida panhandle to Miami, some 700 miles away, hurricane cleanups are a regular part of life. With an average of a dozen hurricanes passing through each year, almost as normal is the sight of houses with roofs ripped off and blue tarpaulins flapping about.

But that doesn’t scare the local residents away.

“I love this area because the people are just different,” said Melvin Whitehurst, a gospel preacher at Pensacola’s Olive Manor Church of Christ who at the age of 80 has ridden out many hurricanes, speaking from the pulpit during a recent Sunday morning sermon at the church.

Preaching after a week of uninterrupted torrential rains, Whitehurst insisted to his flock he had never thought of leaving — even after the church and his home, some 25 miles away across the state line in Lillian, Alabama, seemed destined to be razed by Hurricane Sally last year.

“Our church was almost completely destroyed,” he recounted, “but I am blessed, because even though we have these disasters, we always have warnings to move.”

Hurricane Sally ripped through the Gulf Coast last September with sustained winds of 105 mph, suddenly dropping 20 inches of rain on many areas. While Whitehurst’s home was, in the end, spared from any lasting damage, his church in Pensacola was nearly demolished.

Almost a year after Sally, and with another set of hurricanes now threatening the Gulf Coast as the summer wears on, the cleanup around the Olive Manor church and in Pensacola continues.

Whitehurst says that doesn’t bother him — it is, after all, nothing he hasn’t seen before.

It’s a common refrain around Pensacola.

Another local resident, Richard Hogarth, 53, said he was now homeless but managing to get by through repairing homes damaged by hurricanes, which he lives inside while working on them.

“Right now I am looking for a home and it has not been easy,” he told Zenger while repairing the roof of a home. “My goal is to become a licensed subcontractor.”

Hogarth said he had no plans to leave, even in spite of the risks brought by the weather.

“We are here to stay,” he said, laughing.

Yet as much as the weather is a long-accepted cost of a coastal life — with its year-round warm temperatures and quick access to the ocean — it has been getting worse in recent years.

Last year’s Atlantic hurricane season, which officially runs from June through November, closed with record-breaking figures. In total, the 2020 season produced 30 named storms (top winds of 39+ mph), of which 14 became hurricanes (winds of 74+ mph) and seven became major hurricanes (111+ mph). It was the most storms ever recorded, surpassing the 28 in 2005.

It was also the second-highest number of hurricanes ever.

Estimates also placed the 2020 season as the fifth costliest storm season of the last 30 years — with the No. 1 season being 2017, which saw an estimated $278.3 billion worth of damages thanks to the onslaught of bad weather brought by hurricanes Harvey, Irma and Maria.

According to the National Oceanic and Atmospheric Administration database, the 2020 hurricane season, by comparison, caused some $60–65 billion in economic damage across the country.

Lauren Gaches, a spokesperson for the National Oceanographic and Atmospheric Administration based in College Park, Maryland, told Zenger that it can be difficult to predict how bad a season will be in advance, with storm systems often rapidly progressing in severity and size.

“All tropical systems are cyclones, and depending on the wind speed, it could turn into a tornado or hurricane,” Gaches said, providing only broad estimates for the current 2021 season.

For 2021, she said, there’s a likely range of 13 to 20 named storms, out of which six to 10 could become hurricanes. Out of those, three to five could be major hurricanes. But even those ranges are only offered at 70 percent confidence, and it could end up far better or worse, Gaches said.

As usual, local and federal authorities are taking few chances.

“Now is the time for communities along the coastline as well as inland to get prepared for the dangers that hurricanes can bring,” said Secretary of Commerce Gina Raimondo in a recent speech, pleading with Gulf communities to prepare early and keep up-to-date with warnings.

“The experts at NOAA are poised to deliver life-saving early warnings and forecasts to communities, which will also help minimize the economic impacts of storms,” she said.

Pensacola’s history is intertwined with its extreme weather.

By some measures, it is in fact the oldest city in the state. However, in 1559 — when the Spanish established it as their first settlement in Florida — a hurricane passed through, destroying it.

According to University of West Florida figures, Pensacola sustained 13 damaging hurricanes in the period between 1906 and 2015, with some of the worst events toppling over ships and military vessels and damaging Santa Rosa Island where Fort Pickens, a Civil War fort, still stands.

Since 1975, the city has also been hit directly by eight hurricanes and many more tropical storms; it ranks 8th on Sperling’s authoritative list of the “worst places for hurricanes” in the U.S.

That has had deep impacts on the community.

For the last 27 years, Rev. John Powell, the founder of Truth for Youth, a Christian youth group, has been working with people young and old in the never-ending effort to clean up after storms.

“We have been active in helping people in variety of ways such as tree cutting, repairing fences and taking food, and doing things for low income residents,” Powell told Zenger, explaining that the deadly weather in its own strange way forced locals to grow closer together.

With no one able to confront the power of extreme weather alone, he said, those people who choose to stay in Gulf Coast cities like Pensacola eventually accept they are all in it together.

“Its overwhelming because is many people have little or no insurance,” Powell said. “People must learn to come together. We have to practice more love and respect each other.”

It also has led to peculiar pastimes: hurricane tracking is as popular as hunting and football here, and locals take pride swapping long-and-winding stories of where they were when hit by any major storms, collecting them like stripes on their shoulder. The most popular are Agnes (1972), Betsy (1965), Camille (1969), Eloise (1975), Frederick (1979), Katrina (2005) and Ivan (2004).

But the locals take the most pride from their shared commitment to public service.

Ruth Oliver, her daughter Cheryl Johnson and her granddaughter Olivia Johnson are all registered nurses. While their work lives often get hectic during the storm season — presenting at times thankless obligations — they told Zenger they could not imagine living anywhere else.

Speaking while fishing along the coast of Pensacola, the trio, who are also all members and volunteers at the local Cathedral of Faith, said they cherished the tight-knit community.

At the heart of much of that is a network of church groups and the armies of volunteers.

“When you grounded in the Lord you want to give back. We are in this earth to help each other,” said Oliver, a mother of six. “My daughter Cheryl helps pastor with everything.”

Mike Lewis, executive director of the Churches of Christ Disaster Relief, said the church networks help pool the resources of people living all along the Gulf Coast, including across state lines, with some 43 different communities being serviced by his group’s 54-foot-long trucks last year.

He said supplies including prepackaged food, bottled water, bleach, clothing and other items were shipped out by the group in 2020. All that help, though, came from the grassroots networks of church members and volunteers who track potential disasters.

“We are a non-profit group sponsored by Church of Christ members who monitor storms,” Lewis said, explaining that small contributions add up. “The value of those supplies was $4.8 million.”

There are also endless opportunities for entrepreneurs with a community spirit, as builders fight a never-ending battle to stem the tide of houses protected by little more than a blue tarpaulin.

“My partner Johnny Davis and I are focused on rebuilding the neighborhood because there is a great need,” he said. “Many of the elderly can’t make the smallest repairs.”

“One man was 80, but he couldn’t repair the net covering the pool.”

In a place like Pensacola, everything is always just around the corner from needing a repair.

A three-mile bridge, for instance, just re-opened a few weeks ago — it had been damaged by Sally last year. That gave any disgruntled locals back one of the easiest ways out of Pensacola.

But Harris, like most here, said he has no plans to leave.

“I love the coastal life,” he said.