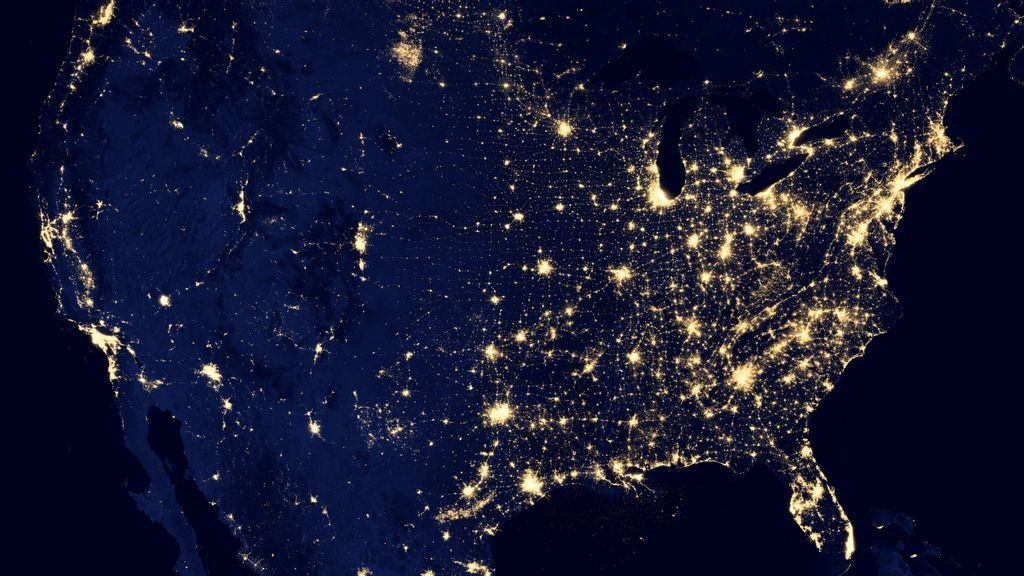 Turning power grids into net-zero energy systems will be a massive undertaking that will involve a hefty doses of high tech. (NASA)

As achieving a “net-zero” energy economy is becoming a central goal of governments, businesses, organizations and even individuals, energy technologies like solar, wind, hydropower and nuclear are often front-of-mind with business executives and policy makers around the world.

But getting to net zero is not just about adding renewable and carbon-free energy sources grid, several industry and technology executives said at a recent business forum. Getting there will be just as much about the ones and zeros as it will be about solar panels, as executives discussed the importance of digital automation and information technology during the recent Reuters Global Energy Transition conference. The event featured business, industry and government leaders from across the globe.

“We need technology from the edge to the core to the cloud of our network, integrated together, to make decisions in real time to optimize the use of sustainable and renewable energy,” said David Holmes, chief technology officer for energy at U.S.-based computer maker Dell Technologies. “The route to net zero will require a total transformation of the energy systems that underpin our economy.”

To avert the worst consequences of climate change, economies need to reduce emissions of carbon dioxide to “net zero,” where these emissions are either averted, captured or otherwise reduced. Fossil fuels emit a varying amount of carbon dioxide emissions, while transferring to renewable energy sources creates problems with costs, infrastructure and reliability, officials at the conference said.

The lockdowns initiated by the coronavirus pandemic may have inadvertently kick-started the drive to net-zero, in more ways than one, speakers noted. Often mentioned were the emissions reductions achieved through the drop in economic output, as people curtailed travel and many businesses shut down, leading to a corresponding drop in fossil fuel use and, subsequently, drop in carbon emissions.

But the pandemic lockdowns created another trend that can help accelerate the transition to net zero, observed Mike Train, chief sustainability officer at Emerson, a global software, engineering and manufacturing company based near St. Louis, Missouri.

To meet the goal, more operations that once required fossil fuels now need to be electrified. The most prominent example are automobiles, as the internal-combustion engine in cars is giving way to plug-in electric vehicles.

Upgrades and improvements to the electrical grid are often touted hand-in-hand with more deployment of solar and wind facilities, Emerson’s Train said. Technologies like utility-scale batteries will also need to run at the best operational capacity in order to get the most in emission reduction, which will also require automation and real-time data.

“We have trillions of dollars of infrastructure that we need to adapt if we’re going to provide a zero-carbon future,” he said.

Creating the apps, analytics, technology and other services to manage this transition is a key part of Schneider Electric’s future business model. With its EcoStruxure offering, the French-based company offers an open, interoperable, “plug-and-play” IT platform that allows enhanced control of homes, buildings, data centers and other infrastructure, said Cecile Vercellino, vice president and EcoStruxure program leader.

“For renewable energy, without digitization, we will not be able to manage the stability of the grid,” Vercellino said. “Digitization of electric distribution means better management of the network, more reliability, safety and efficiency.”

Even producing the needed information technology will require breakthroughs in different sectors, like mining.

“These technological solutions will require rare-earth minerals that will need to be mined at volumes never done before,” Train noted.

The poor utilization of existing energy was a primary area where emissions reductions could be made through better utilization of technology, calling energy efficiency “the most important strategy of all” to meet net zero goals, Train said.

“Only about one-third of the energy introduced into the system does what we ask it to do, like move my car,” Train said. “Two-thirds of the energy is lost in the process of moving it through the system, and from waste and heat and a number of other things.”

Not only has the U.S., the European Union, the United Kingdom and other countries announced net-zero goals, so have many corporations. On Earth Day this year, Dell Technologies joined them in announcing its own 2050 net-zero goal, with Holmes noting how the company was already embracing the principles of the “circular economy” by recycling every product in the cycle. It was just the first of many steps the company will have to take to reach its goal.

“We’re in no illusion about the scale of the task ahead of us,” he said.