A massive whale-spotting exercise is under way in New Zealand to reunite a lost baby beach orca with its family.
By Ben McKay July 13, 2021
Facebook
Twitter
Linkedin
Email 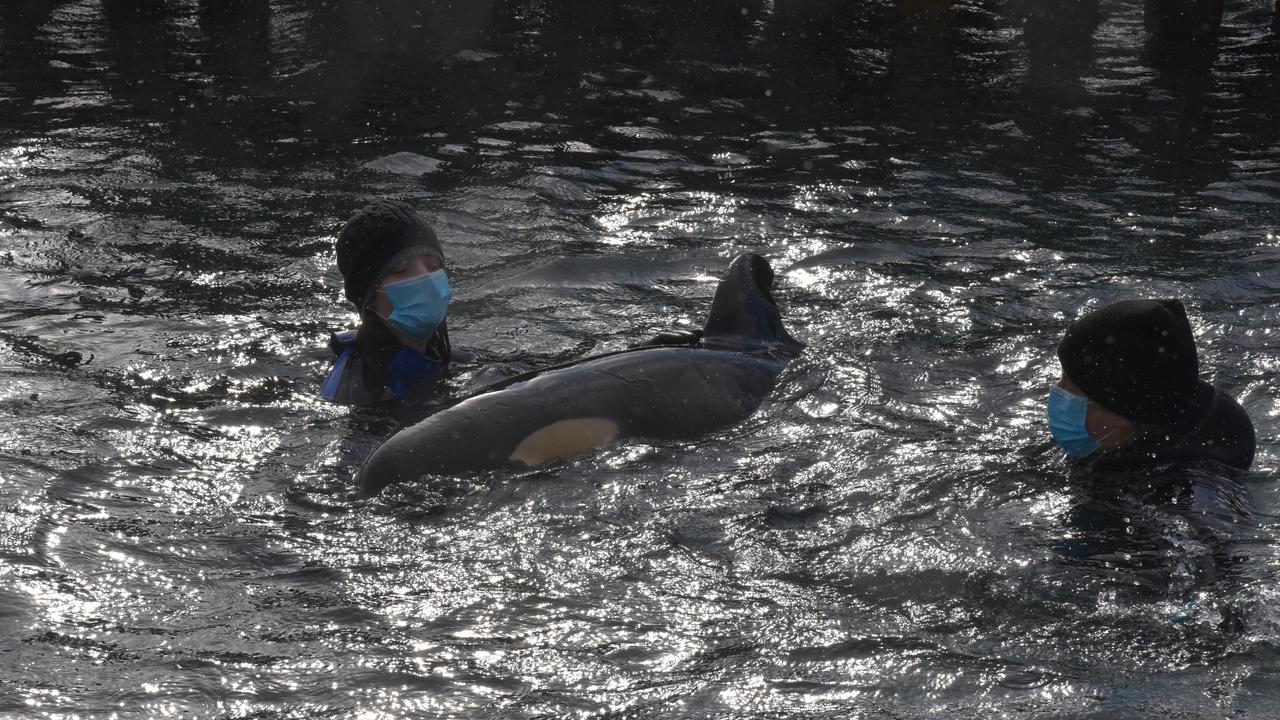 Authorities are racing to reunite a baby orca who has lost his family in New Zealand. (Ben McKay/AAP image)

WELLINGTON, New Zealand — A baby orca faces a race against time to find his lost family after his discovery, beached and abandoned, north of Wellington, the capital of New Zealand.

Hundreds of New Zealanders have joined the cause to both protect the youngster and find his mother. Without a reunification, the orca — given the name Toa on July 13 in a Maori ceremony — will die.

“We have hope,” Orca Research Trust founder Ingrid Visser said. “We put a man on the moon. Surely we can get a whale back to its family.”

Visser is coordinating the rescue effort from Plimmerton, a northern suburb of Wellington, close to where the orca was discovered on July 11.

“Two young teenagers discovered him in a rock pool, and that set everything into motion,” she said.

The whale, estimated at six months old, was transported to the nearly Plimmerton Boating Club, where a makeshift pen was set up. A two-pronged strategy has been devised. With decades of experience caring for the much-loved species, Visser is overseeing the care operation to maintain Toa’s health.

A cast of thousands — including the council, Wellington Zoo, the boating club, animal welfare organizations, and devoted locals — are giving up their time to support the orca.

Volunteers keep track of his vital signs, cycling in and out of the water on an hourly basis.

Orca devotee Kate Godfree spent time in the water with Toa on the morning of July 13, comforting him by tapping and stroking his dorsal fin to simulate interactions with its lost mother.

“I have an orca tattoo, and I grew up watching ‘Free Willy’,” she said. “It’s a sh***y situation, but this is amazing.” Visser said she was blown away by the support.

“It’s been a phenomenal effort. We’ve had donations of food and blankets. Heaters. So many volunteers,” she said, “We are making him as comfortable as possible.”

The second prong is the search for Toa’s family. Wellingtonians have responded en masse to the orca’s plight, searching coastlines by foot, boat and plane in the hope of spotting the iconic pointed dorsal fin of a relative.

“Orcas travel between 100 and 150 kilometers [62 and 93 miles] a day, but they don’t go in a straight line. They could turn around and come back here tomorrow. We don’t know,” Visser said.

The roaming nature of the animal means if a pod is found, it’s most likely to be Toa’s family. However, any family may do.

Orca families have been known to adopt lost children so long as the mother is lactating and can support the youngster. Then will come the reunification.

“That may involve putting a boat with to stay with the family until we can get him there,” Visser said.

“We will do that by road or boat. It isn’t easy to transport by helicopter. You don’t want a 200-pound animal thrashing around inside a chopper.”

Visser appealed for public support to help find the family and avoid a tragedy.

“The only way we are going to find the family is if the public gets behind us,” she said, “We’re asking everybody to put it on every social media platform they have. Even if they have a network of two.”