We’re Not All Going Back To the Office: America Gets Ready To Go Hybrid 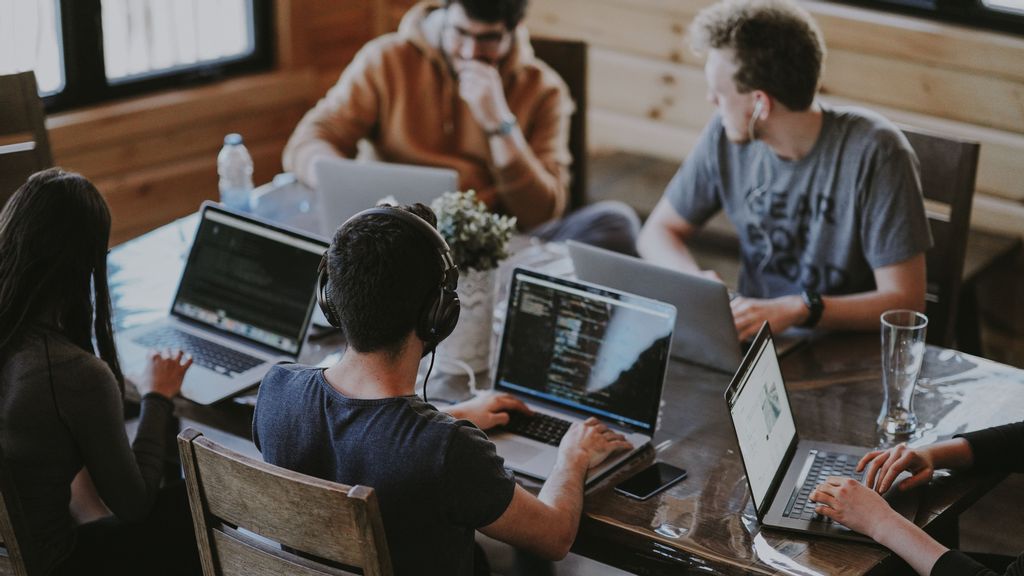 As America gets ready to go back to the office, some industries are more likely to stay remote than others. (Annie Spratt/Unsplash)

Only 44 percent of American employers have asked their workers for input as they crafted policies for returning to the office after the COVID-19 pandemic, a new survey found.

A majority of firms with workers who had gone remote because of pandemic restrictions came up with policies about what to do when the rules were relaxed without asking their workers, according to results released by Vistage, an executive coaching service.

The finding comes as the issue of how workforces will return to office environments — if they do return — becomes a more widespread question inside C-suites.

About 50 percent of American jobs cannot be conducted remotely, said Robert Pozen, senior lecturer at MIT’s Sloan School of Management and co-author of “Remote, Inc.: How to Thrive at Work… Wherever You Are.

But among the half who can work remotely, experts told Zenger, there are significant variations in gender, age, geography and industry sector as debates continue about whether return to the office in full, in part or not at all.

Female and African-American employees are more likely to want to continue telecommuting. The same is true of millennials and people in so-called “blue” states. But red-staters and Generation Xers — those age 41 to 65 — are more likely to embrace full-time return to the office, they said.

Some of America’s largest companies have in recent weeks publicly grappled with their workforces’ fractured views on whether, and how, to get back to brick-and-mortar office space.

Some of the biggest U.S. banks have taken a stricter approach. Goldman Sachs required most of its employees to return to the office in June; Morgan Stanley expects employees back by September if they have proof of COVID-19 vaccination.

James Bailey, professor of leadership development at the George Washington University School of Business in Washington, D.C., told Zenger that many companies fear that they will never reach the same pre-pandemic level of company culture if their employees keep working from home.

“You can’t build culture remotely,” Bailey said. “You just can’t do it.”

Bailey surveyed nearly 500 executives on their return-to-office preferences and tested differences across age groups. He found that millennials resisted in-person work the most and members of Generation X were the most supportive. Baby boomers fell in the middle.

Businesses in Republican-leaning states have been more eager to reopen with in-person employees; those in blue states tend to be more wary.

He said business leaders have tended to follow politicians’ leads, partially because it’s “such a confusing time” for executives to make good decisions about how to handle the pandemic’s aftermath.

He also said women, who lost nearly 1 million more jobs than men since the pandemic started, prefer hybrid work models — a flexible mix of at-home and in-office work. The pandemic impacted working mothers’ careers and increased their household responsibilities far more than it impacted women without children, according to McKinsey & Company.

But Pange said when childcare responsibilities keep women from going to work in person, male executives can develop misperceptions about their female colleagues being unfit or unqualified.

There are also variations among workers in different sectors of the U.S. economy. According to the Best Practice Institute’s 2021 Return to Work Study, business support and logistics workers are likely to want to return to the office. Healthcare and pharmaceutical employees made up the majority who want to stay put.

Louis Carter, CEO of the Best Practice Institute and author of that study, found that 76 percent of respondents believe their personal productivity improves when they work from home. But he said that productivity depended on employees’ prior experiences working remotely, and on their working conditions at home.

And while returning employees may face long commutes and interruptions from coworkers in the office, Carter said, interruptions at home might come from children or pets. “It’s a big variable as to which one is more distracting,” he said.

Gleb Tsipursky, CEO of Disaster Avoidance Experts and author of “Resilience: Adapt and Plan for the New Abnormal of the COVID-19 Coronavirus Pandemic,” said minorities, especially black employees, are more likely to prefer working from home because of concerns about in-office discrimination.

In deciphering why so many employers have ignored their employee’s preferences, Tsipursky said they tend to base their actions on what’s most familiar. When executives proposed ambitious back-to-office plans without asking their workers to weigh in, they shut out beliefs they anticipated would contradict their own — an example of confirmation bias, according to Tsipursky.

Some experts said they believed most companies will move to offer every office employee a hybrid work model.

Pozen told Zenger that companies will create teams of workers who will “rotate through the same space, two or three days a week,” in order to save on real estate while also allowing some in-person collaboration time.

Pange said a “tremendous amount of opportunity” would arise to develop and implement new technology that will enhance the hybrid work experience, for those who want to work from home. A hybrid work model with designated office days, he said, could help decrease employee burnout by clearing the blurred lines between work and leisure time.

“This [remote] productivity spike is not sustainable, and so I believe it’s going to crash,” Pange said. “So in an ironic twist, actually coming back to the office might lend itself better to having a work–life balance.”