VIDEO: Born Three: Trio Of Snow Leopard Cubs Follow In The Footsteps Of Their Three-Legged Gran

Triplets are the granddaughters of a big cat saved from death by conservationists after a snare cut off one of her legs.
By Georgina Jadikovskaall July 12, 2021
Facebook
Twitter
Linkedin
Email 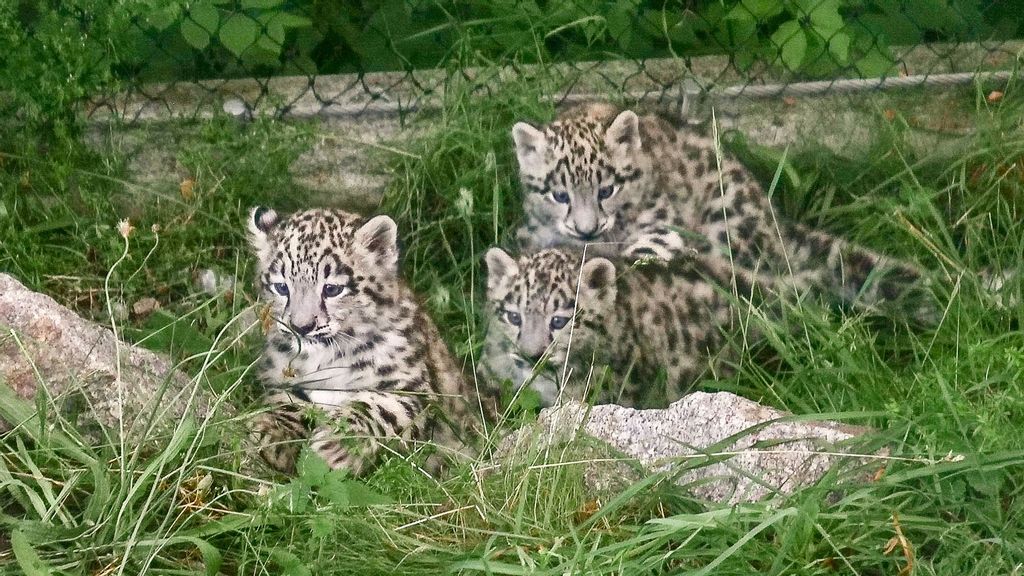 The three female snow leopard cubs that were born in the Wilhelma Zoo in Stuttgart, Germany. (Wilhelma Zoo/Zenger)

Three rare snow leopard cubs have won over visitors’ hearts during their first experience in the outdoor enclosure at Wilhelma Zoo in Stuttgart, Germany.

Cubs Dawa, Karma and Nyima were born at the zoo on April 11.

The triplets, each weighing around 1.1 pounds, were allowed to go outside for the first time after they received their vaccinations.

The cubs were staying in the inner part of their enclosure alongside their mother, Kailash, until mid-June. Their father, Ladakh, observed them from the neighboring enclosure.

While they are still developing their strength and gaining body control, the zoo will move them to the upper part of the facility, where guests can watch them until they are old enough to be reunited with both parents.

“It is wonderful to experience how the three cheerful cubs grow up carefree. Because of their sad history, our little heroes are already huge stars when it comes to species protection. It is a prime example of how species protection in nature and in zoos is intertwined.” said zoo director Thomas Kolpin.

He said the three cubs are of special importance to European conservation programs as they are granddaughters of Djamilja — a snow leopard born in the high mountains of Tajikistan in Central Asia who was captured by poachers when she was 5 months old.

Djamilja lost one-third of her right hind foot as a result of the trap poachers used to catch her. She was sold at a black market in Bishkek, Kyrgyzstan.

She was later saved by animal-welfare activists and brought to Zurich Zoo in Switzerland where she had several offspring, including the triplets’ father, Kailash. Djamilja died at the age of 19.

“It is incredibly motivating to see that not only can individual animals be saved from death by working together, but this has also contributed to further generations of this unique big cat species,” Kolpin said.

The snow leopard (Panthera uncia) is listed as ‘Vulnerable’ on the IUCN Red List because the global population is estimated to number fewer than 4,000 in the wild.

Due to poaching and habitat destruction, this number is expected to decline about 10 percent by 2040. There is also a nonprofit, Snow Leopard Trust, dedicated to protecting the species in five countries where 75 percent of wild snow leopards live.