U.S. Border Closure: Beneficial To Some, Detrimental To Others 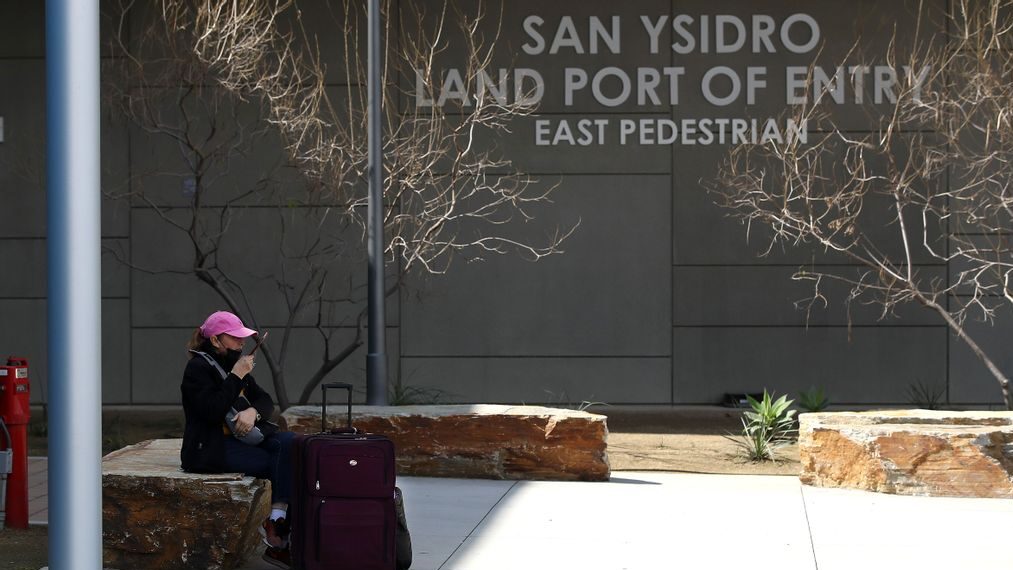 The United States closed down the land border with Mexico in March 2020, due to COVID-19. Mexicans cannot enter the United States if they do not have an ‘essential’ reason. This has negatively affected businesses in the US border cities, though it has been a boost for Mexico’s border cities such as Tijuana and Ciudad Juárez. (Sean M. Haffey/Getty Images)

MEXICO CITY — “If we don’t sell, we don’t get paid,” said Carolina Hernández, a saleswoman for the used car dealership Cars on Credit, located at 160 San Ysidro Boulevard in San Diego, California. Sales have fallen 80 percent since March 8 last year, when the U.S. government shut down land border crossings for tourists and non-essential travel from Mexico, as a measure to stop the spread of COVID-19.

“From selling 30 cars a month, now we hardly get to 10,” said Hernández, of Mexican origin. To stay afloat, the agency has had to lay off five of its ten employees.

Anyone who proves their status as an employee, student, or participant in business a deal, along with American residents, can cross from Mexico daily. However, visitors, family members, and tourists — who are the backbone of many U.S. border cities’ economies — cannot enter the U.S. Paradoxically, the same people who cannot enter the U.S. by land can enter by air travel.

Critics say the preventive measure lost its meaning after the COVID-19 spikes were over. The restriction continues to be renewed month after month and is currently in effect until July 21, when it will be reevaluated.

“Arbitrary discrimination [at the border] between visa types has no logic regarding how to control the pandemic if around 100,000 people continue to cross the border between California and Baja California daily,” said a statement released in May by the San Ysidro Chamber of Commerce, which is fighting for reopening the border due to the dozens of businesses that have closed down.

According to the Chamber and other experts, the closure ceased to make sense for COVID control due to the reduced number of infections and the distribution of vaccines. They say the measure discriminates against Mexican tourists and merchants who support a large part of the economies of cities such as El Paso, Texas, and San Diego, California.

“It was more of an administrative decision, instead of a coordinated effort between the two countries, as border cities have a very dynamic common area and, therefore, need specialized protocols so that they could have avoided the economic disaster that they generated,” said researcher Rosío Barajas, member of the Directorate of Social Studies of the Colegio de la Frontera Norte.

The measures were asymmetric because, though some were replicated on Mexico’s side of the border and forced their businesses to close during the lockdown’s first three months, Mexico did not close down its border. Mexico allowed the transit of tourists and visitors to its border cities for family visits and medical or non-essential activity.

“It was a combined effort of the federal and local government. Trying to avoid breaking the economic spirit of these towns, they allowed entry to foreigners, but there was no common protocol,” said Barajas.

Tijuana-San Diego and Ciudad Juárez-El Paso constitute two of the most dynamic border city pairs between Mexico and the United States. They are considered the busiest border cities globally, so anything that affects movement between the cities generates serious consequences.

These cities see millions of crossings each year, and data show how the recent restrictions have impacted the mobility of travelers.

In 2019, the number of people using the crosswalks connecting Mexico and the United States through the two entries linking Tijuana to San Ysidro Country — San Ysidro and Otay Mesa — reached 14.3 million, while the crosswalks between El Paso and Ciudad Juárez saw 7.6 million. During the pandemic, these numbers plummeted: 7 million through San Ysidro and 3 million through El Paso, according to data from the Bureau of Transportation Statistics.

Mexican citizens go shopping, study, and work in those neighboring border cities, while American citizens seek healthcare and entertainment on the Mexican side of the border.

Lower housing costs mean that many American retirees prefer to live in Mexican border cities to remain near their home country while at the same time maximizing their pension’s value, says Barajas. These American citizens have had free mobility, unlike the Mexican population or those with a tourist visa who wished to buy food, clothes, or appliances, or those who sought recreation activities in the border cities of the United States.

“Crossing the border between the United States and Mexico for educational purposes is considered an essential activity. Therefore, when we learn that a student is having difficulties crossing the border, we can work with [United States] immigration officials to quickly resolve the situation,” said Victor Arreola, a spokesman for the University of Texas at El Paso, which has many students who cross the border daily.

What is bad for some is an advantage to others

Travelers were not the only ones affected. According to the Cross-border mobilities and COVID-19 study done by the Colegio de la Frontera Norte, “local commerce of San Diego and El Paso suffered the effects of this temporary closure, particularly because the cross-border population is a large chunk of their customer base.”

According to the San Ysidro Chamber of Commerce, 197 businesses closed down from March 2020 to March 2021 due to the restrictions implemented in the border region, which meant a loss of 70 percent of their sales and 1,900 jobs — a third of the total that existed before the pandemic.

Conversely, those who were unable to do their shopping on the American side and had to remain in Tijuana and Ciudad Juárez managed to create a spike in business activity on the Mexican side of the border.

“People that previously went to buy to the United Stated had to remain here. So it has been an opportunity for Mexican merchants to gain the customer who would usually go to the U.S.,” said Jorge Macías, the president of the Tijuana National Chamber of Commerce, Services and Tourism, which brings together 1,500 businesses.

The port of Ensenada, also in Baja California, was similarly forced to focus on a new type of customer. In past years, the port city attracted tourists from central Mexico or abroad on their way to cross the U.S. border; however, due to border restrictions, the city has tried to further its image as a tourist destination.

“As of July 2020, we gradually reactivated operations, and right now, we are in the midst of an economic recovery of the tourism sector,” said Amador Arteaga, director of Proturismo Ensenada, a municipal office that promotes the city as a tourist destination.

According to the director, the hotels have almost reached the same occupancy level as before the pandemic.

Despite the benefits, both sides agree that border traffic must return to normal. “The economies of the cities are too intertwined. If a border city in the U.S. has a bad streak, it reflects on our side, and vice versa,” said Mejía.

Yet perhaps things will never return to the way they were before. Instead, as it happened after September 11, 2001, the world may adapt to the new way of living. “It is expected that the rules of the game will change and that a trend toward greater control will rise,” said Barajas.