Ray Of Dope: Mystery Object Trapped In Body Was Metal Clip In An X-Ray Mat

Medics were fooled for months into thinking objects were trapped inside patients.
By Georgina Jadikovskaall July 12, 2021
Facebook
Twitter
Linkedin
Email 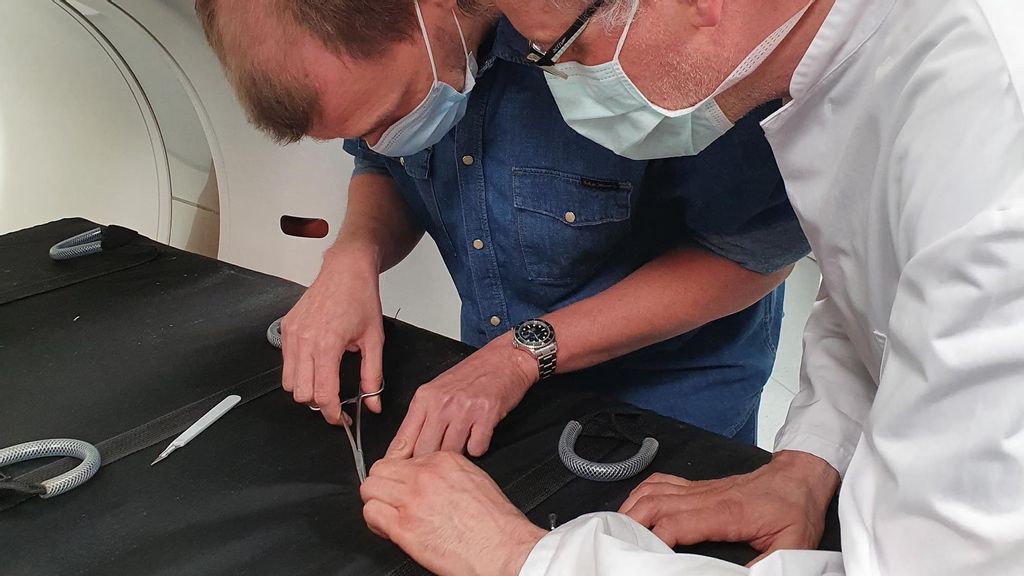 The removal of the metal clip that appeared in CT scans in the Saarbrucken Clinic in Germany. Note: We have obtained permission to use this photo from Kristin Schafer. (Klinikum Saarbrucken/Zenger News)

A metal clip hidden in an X-ray table mat puzzled doctors for months as it kept appearing in patients’ scans and made medics believe it was stuck in their bodies.

Radiologists at the Saarbrucken Clinic in the German state of Saarland finally solved the reason why an unidentifiable foreign body kept appearing in their patients’ scans.

The clinic’s doctors noticed the curved piece of metal that randomly popped up in scan results and, due to its size, could only be seen on close inspection.

After a detailed investigation and images comparison, it became clear to Head of Radiology Elmar Spuntrup and his team that the small metal piece must be in the table.

“The doctors noticed that all affected patients were lying on a mat during the scan,” said Saarbrucken Clinic press spokesperson Kristin Schafer.

However, since there were several mats in the Saarbrucken Clinic, Spuntrup decided to place them inside the scanner and examine each of them in X-ray images.

“Professor Spuntrup wanted to put an end to the assumptions once and for all, and without further ado ordered a special kind of clip search,” Schafer said.

After the metal object was finally detected, a “microsurgery under high-tech conditions” was performed by Spuntrup and Radiology Senior Physician Steffen Ross to finally remove the clip.

“Of course, the wound was well taken care of and the ‘patient emergency carrier’ is well and fully used again,” the clinic wrote in a light-hearted and emoji-filled Facebook post.

Schafer said that everything went well and the five affected patients suffered “no misdiagnoses.”

Spuntrup said the incident provided a good opportunity to educate medical students about sources of error in radiology, noting that error-free image quality ensures faster diagnoses. The clinic is also the teaching hospital of the medical faculty of Saarland University.

Several studies have found an estimated average rate of between three and five percent for day-to-day, real-time radiology errors and discrepancies. One study by Leonard Berlin, a professor of radiology at the Rush University Medical College and the University of Illinois, and published by the German academic publisher De Gruyter, noted that most radiological errors are either corrected quickly or are not clinically important, and do not have an adverse effect on the health or treatment of the patient.

Schafer did not have information on how the metal part got inside the mat.

The Saarbrucken Clinic serves patients from southwest Germany as well as neighboring France and Luxembourg. With over 250 doctors across 16 specialist departments, the clinic sees roughly 28,000 inpatients and 60,000 outpatients annually.