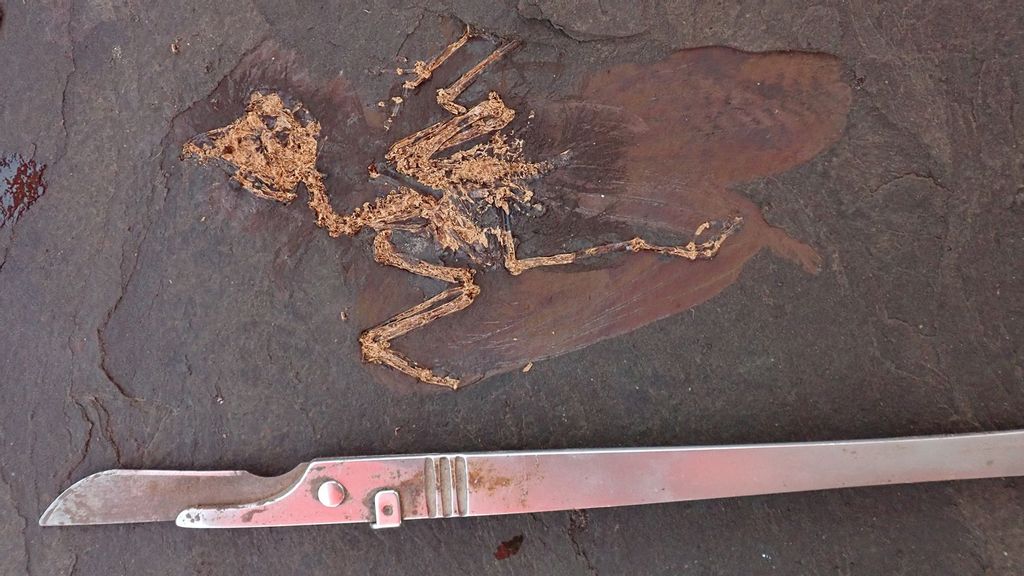 The well-preserved fossil found by the Senckenberg team. (Senckenberg/Zenger)

A well-preserved fossil of an unknown bird species that resembles the great tit has been uncovered at a UNESCO World Heritage Site by German archeologists.

The fossil of the previously unknown bird species was excavated from the oil shale layers at the quarry Messel Pit about 22 miles (35 kilometers) southeast of Frankfurt.

The Messel Pit, a hotspot for scientific discoveries, was declared a UNESCO World Heritage Site in 1995.

According to scientists, the newly found bird species was as big as the commonly known great tit (Parus major), had a banded tail and a compact and short beak.

The archeological team of the Senckenberg Nature Research Society reported that 500 finds have been made in the first half of the excavation season, including many plants, insects and fish.

Senckenberg Nature Research Society and Nature Museum ornithologist Gerald Mayr said that over 70 species and many hundreds of individual finds have been recovered from rock layers that he believes are close to 48 million years old.

“The new, exceptionally well-reserved find of the so-far unknown bird species shows that we are still far from having fully recorded the biodiversity of Messel’s bird world,” Mayr said.

“We are happy about each of the approximately 500 documented fossil finds of this year’s excavation, but the bird is a real highlight, in addition to some isolated bone scales of a small crocodile, a beautiful flower and an unusually completely preserved dragonfly,” said excavation team leader Sonja Weidmann from the Senckenberg Research station Grube Messel, who discovered the great tit-sized bird fossil.

The team is not yet able to make accurate rankings of the new discoveries.

“It is still too early for final classification of the fossil. It seems certain, however, that the species is not yet known in the Messel Pit,“ said Mayr.

According to the scientist, the banding of the bird’s relatively long and broad tail is due to a dark pigment called melanin.

Mayr said the beak seems to be raptor-like. The shape of its feet and claws contradicts the assumption that the species was a small bird of prey.

“It is more likely that the bird ate fruit and insects. However, more details can only be given after the final preparation is finished.”

In addition to the bird species, other fossils have also been found at the excavation site in recent years, such as a primeval horse and a rodent of the genus Ailuravus which resembles a giant squirrel.

The Senckenberg team will continue excavations in August and September.