House Democrats are trying a new way to shutter the facility holding terrorism suspects. But it is far from certain to succeed.
By Carlin Becker July 12, 2021
Facebook
Twitter
Linkedin
Email 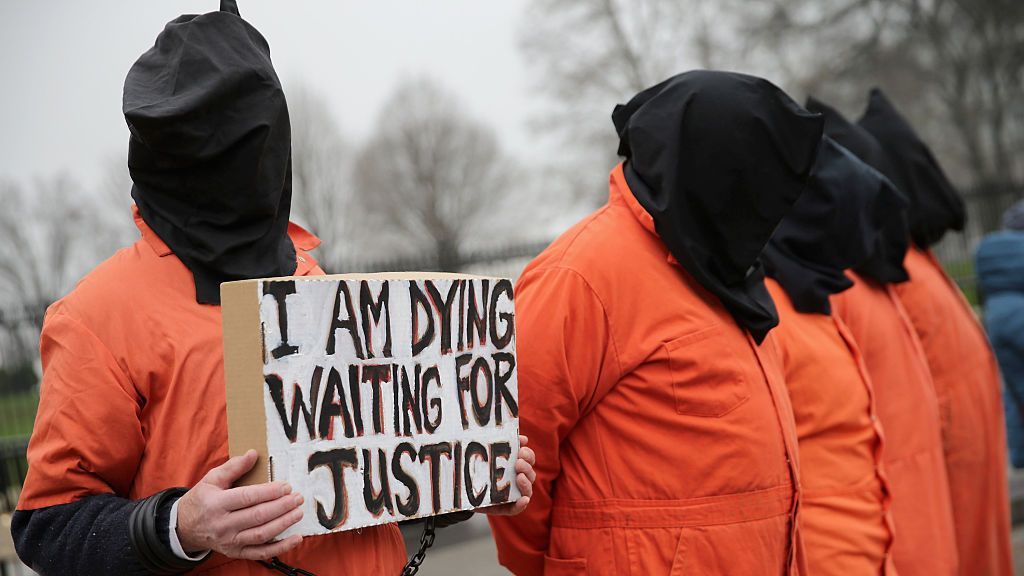 Demonstrators from Witness Against Torture dress in orange jumpsuits and wear black hoods while demanding that then-U.S. President Barack H. Obama close the military prison in Guantanamo, Cuba, outside the White House in January 2016 in Washington, D.C. (Chip Somodevilla/Getty Images)

A group of House Democrats are trying a new way to close the Guantanamo Bay military prison nearly 20 years after it was opened by then-President George W. Bush: defunding it.

President Joseph R. Biden Jr. has so far remained mum on the push, which is included in a new $706 billion defense spending bill and would force the closure of the prison by depriving it of money. As part of a budget bill, it could not be stopped by a Republican Senate filibuster if it is ultimately passed in the House — but even that remains up in the air.

The fiscal year 2022 defense funding bill passed by a House Appropriations Committee panel on June 29 bans funds being used to operate the facility after September 2022, but until it wins support from the Democratic House leadership its passage is uncertain.

Critics of the proposal argue the detainees, who are accused terrorists, are too dangerous to either be freed abroad or relocated to facilities on the U.S. mainland, while even some supporters have raised concerns that closing the facility could be difficult.

It also risks political blowback for a new administration with a very busy policy agenda.

“President Biden may wish to close Guantanamo, but this is a non-issue for most Americans and indeed most people around the world,” Michael O’Hanlon, senior fellow and research director at the Brookings Institution’s foreign policy Program, told Zenger, noting a 2016 poll that found more than half of Americans oppose closing the center.

The Bush administration opened the detention facility, which is located on a military base the U.S. forcibly leases from Cuba, in 2002, shortly after the Sept. 11, 2001 terrorist attacks.

The prison held roughly 800 inmates at its peak, most of whom were 9/11 suspects and other combatants captured on the battlefield in Afghanistan.

Over the years, however, numbers have dwindled, with only 40 now remaining.

At least a dozen more cannot be transferred.

Among them are ten who are currently being tried in military courts for affiliation with terrorist groups and two others who have already been convicted.

What the U.S. government would do with those who cannot be released to other countries — such Ali Hamza Ahmad Suliman al-Bahlul, an Al Qaeda propaganda chief and Osama bin Laden media secretary who was convicted of three terrorism-related charges in 2008 — would be one major obstacle to closing the prison, according to O’Hanlon.

“If we are going to close it … where are we going to send Khalid Sheikh Mohammed, the 9/11 mastermind?” O’Hanlon said, noting that trying the detainees elsewhere presents risks. “That is the biggest question, and until there’s an answer, they can’t close Guantanamo because you can’t free him or risk having him freed in a flawed criminal trial.”

The Biden administration is expected to try to work out an arrangement with Congress to relocate prisoners not eligible for transfer to foreign countries to military installations or Supermax security prisons on the U.S. mainland. But opponents have raised security concerns about imprisoning the detainees closer to the American public.

“It goes without question that any effort to transfer Gitmo detainees to U.S. soil has immense national security implications,” the Major County Sheriff’s Association testified during a House Committee on Homeland Security hearing in 2016.

But the prison has been riddled with claims about lack of due process and rights abuses.

A D.C. Circuit Court of Appeals rejected a challenge from a detainee last year to rule that Gitmo inmates do not have the same due process rights afforded to American citizens under the U.S. Constitution. Oral arguments for a full D.C. Circuit review of the ruling are set to begin in September, and the Department of Justice under Attorney General Merrick B. Garland is expected to soon file a brief outlining its position in the case.

“These are detentions that are inescapably bound up with multiple layers of unlawful government conduct over the years — secret transfers, incommunicado interrogations, forced feeding of hunger strikers, torture, enforced disappearance, and a complete lack of due process,” Daphne Eviatar, director of the Security with Human Rights Program at Amnesty International USA, said in a statement.

“This is about more than just the 40 people still held at Guantanamo — it is also about the crimes under international law committed over the past 19 years and the continuing lack of accountability for them.”

Coming to terms with such issues is a conversation the White House should be having in the open in order for the move to shut down the facility to succeed, Khury Petersen-Smith, Michael Ratner Middle East Fellow at the Institute for Policy Studies, told Zenger.

“It’s been 20 years of documented abuses at the facility, and federal prosecutors … have said the sort of reason for the existence of this federal prison is supposed to be for these very dangerous people who have to have a totally different form of due process with fewer rights than we expect in places like the mainland United States,” Petersen-Smith said.

“Even with all of these limitations, they still have not produced the kind of convictions that they claimed would come from this prison,” he said. “So, is it important that the prison close? Absolutely. But I’m concerned [about] doing it quietly without a public conversation that actually reflects on it and interrogates what’s happened over these two decades.”

The fresh attempts come after former President Barack H. Obama, for whom Biden served as vice president, failed to close the prison over his eight years in office.

The Biden administration has so far pursued a more low-profile approach than that of the Obama White House. Two days after taking office in 2009, Obama signed an executive order to close the Guantanamo Bay prison and relocate detainees to the U.S. within the year, but Congress rejected funding for the move and blocked the transfers.

In contrast, Biden has so far focused on reducing the number of inmates.

While there is still some opposition to closing the facility in Congress, Biden enjoys a Democratic-controlled House and a 50/50 split Senate, which could ultimately be persuaded to reconsider relocating detainees due to the costs of the prison. Twenty-four Democratic senators urged Biden in an April letter to shut down the prison.

Despite his under-the-radar approach and increasing support for closing Guantanamo Bay among Democrats, the efforts still have a long way to go, Peterson-Smith said, arguing that it will likely not be closed until enough Americans are won over to the cause in principle.

“The prison can close if we question why it was opened and what has happened over these 20 years to begin with,” he said. “If we don’t have that kind of conversation that’s really critical, then I’m concerned that this effort won’t succeed.”

Another obstacle is negotiating the transfer of eligible detainees to their home countries, many of which are unstable and have shaky relations with the U.S., such as Yemen.

“Not only has what happened in Guantanamo Bay been traumatic for the people who were there, but it was tremendously damaging to the U.S.’s relationships with people around the world,” Peterson-Smith said. “I don’t think we can expect the kind of clean, peaceful return of people to society without a serious reckoning with what’s happened.”