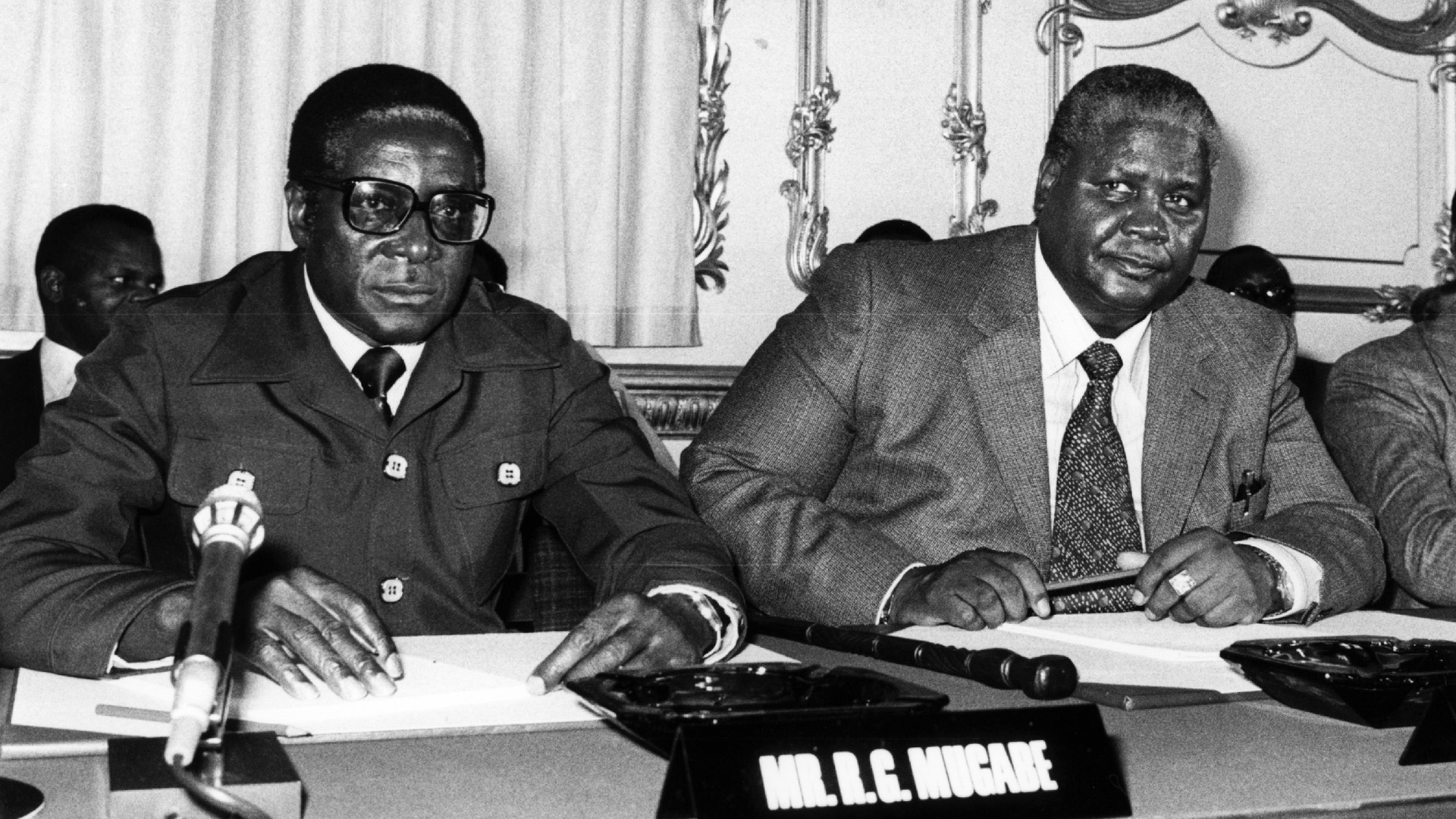 The Constitutional Conference on the future of Zimbabwe-Rhodesia, attended by Leaders of the Patriotic Front Robert Mugabe (left) and Joshua Nkomo on 10th September 1979, at Lancaster House, London. (Central Press/Getty Images)

BULAWAYO, Zimbabwe — Bulawayo-Misheck Ndlovu, 42, from Tsholotsho district, western Zimbabwe, tears up when he narrates growing up without his parents, killed a year after the country’s post-independence civil war started in 1983. The war ended in 1987.

“I was only five years old when they died,” Bulawayo-Misheck Ndlovu told Zenger News.

“My father was made to lie on his stomach, and soldiers started beating him using sjambok [a heavy leather whip] and gun butt. I remember hearing gunshots at the other side of our homestead, only to realize that my mother had been killed while trying to flee.”

After attaining independence in 1980 from the white minority government, tensions flared between the two key liberation movements: the Zimbabwe National Union-Patriotic Front, led by Robert Mugabe, and the Zimbabwe African People’s Union led by Joshua Nkomo. 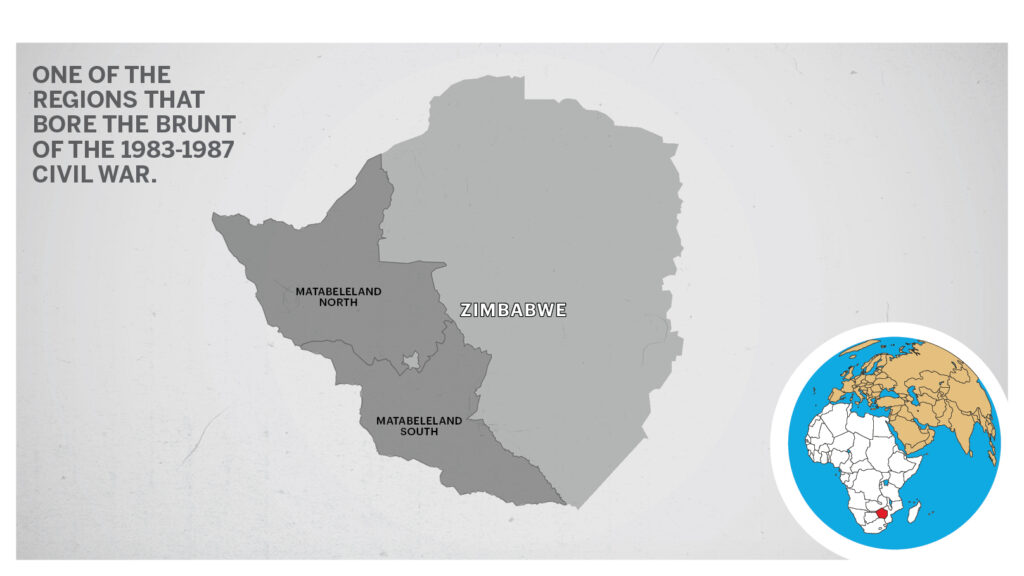 Differences between the two led to violence, with the Mugabe-led government unleashing the North Korea-trained Fifth Brigade on Nkomo’s supporters from the minority Ndebele tribe in Matabeleland.

From 1983 to 1987, the Ndebele people from Midlands and Matabeleland provinces were tortured and executed, more than 30,000 civilians, including pregnant women, were killed.

These massacres are commonly referred to as “Gukurahundi”, meaning the early rain which washes away the chaff before main rains in Mugabe’s Shona language.

Thirty-eight years on, families and individual survivors are still haunted.

“If only we can get some counseling from professionals, maybe it will work. We have suffered and endured a life of traumatic experiences with no one to turn to,” Bulawayo-Misheck Ndlovu said.

Activists have been calling for an independent approach in resolving the grievances of the Ndebele community.

“I think Gukurahundi should be presided over and addressed by neutral people who will respect the standpoint, emotions, opinions, and suggestions of the offended party,” Thandekile Moyo, a human rights activist from Matabeleland, told Zenger News.

“They never got justice or counseling for proper social reintegration. Most survivors of the Bhalagwe concentration camp [a former military base later used as a confinement camp by the army] never left prison mentally. Many live alone, childless. Some came out, but found families gone, dead, raped, and brutalized.”

When he came to power through a military coup in November 2017, Zimbabwe President Emmerson Dambudzo Mnangagwa promised to address the issue and met a consortium of civil society organizations.

“Let’s open a debate so as not to fear anything,” Mnangagwa said during an April 2019 meeting with the Matabeleland Collective, a pressure group representing the Gukurahundi victims.

Mnangagwa pledged that the government would exhume and rebury victims and provide counseling to affected people.

However, some are not convinced that he is going to honor the promise.

“He was part of the perpetrators, and to expect a fair end to the story from Mnangagwa is like pushing mountains,” Dumisani Ndlovu, 63, told Zenger News.

Mnangagwa, a Shona, was State Security Minister at the time, while Vice President Constantino Chiwenga was head of the Fifth Brigade.

“We have been tormented. We will continue to live with the dark past, and nothing will come to fruition under this government. Even in my sleep, I still see the horrible experiences. Families were displaced, and the pain continues to haunt us. I remember soldiers randomly firing bullets at unarmed villagers, young and old. It was cruel,” Dumisani told Zenger News.

Former Minister of Education in the Government of National Unity, from 2009-2013, David Coltart, said Gukurahundi is a painful reminder to those who lost their loved ones.

“The reality is that most of the direct victims are now dead,” Coltart told Zenger News.

“They never received justice or an explanation during their lifetimes. Most of the surviving victims remain in poverty, both materially and mentally. The anniversary is a painful reminder of lost loved ones—destroyed lives in a political battle that has never been explained to them and for which the perpetrators have ever given no heartfelt apology. The pain has never gone away, and in some, particularly in the younger generations, it continues to fester.”

Coltart said the government has not been forthcoming save for empty promises designed to hoodwink the victims.

“There has been a lot of talks, but never any apology, never any admission of guilt and no movement towards the paying of compensation either individually or collectively. The areas affected are still the least developed and serviced areas of the country. There has been a lot of rhetoric recently by the government, but it is all just smoke and mirrors, designed to give the impression that the issue is being dealt with, but in reality, nothing concrete has been done.”

In the past, the Gukurahundi issue was shrouded in secrecy. People have been unable to discuss it for fear of reprisal, especially from politicians in the ruling party and state security agents.

Bekezela Gumbo, the principal researcher at the political think tank, the Zimbabwe Democracy Institute, said there would be no conclusion to the issue without meeting the demands of the affected.

“As long as the government has not looked into the victims’ petitions and done anything in terms of meeting their demands, the victims will not reach closure,” Gumbo told Zenger News.

“The descendants of the victims want their loved ones reburied and compensated, but the government has been talking about giving them death certificates.”

A pact between Mugabe and Nkomo led to Dec. 22, 1987, Unity Accord with the two former liberation movements merging under the Zimbabwe National Union-Patriotic Front banner.

Then Mugabe appointed the Chihambakwe Commission of Inquiry into the massacres; however, its findings have never been made public to date.

Even the Constitutionally-established National Peace and Reconciliation Commission has failed to address the issue.

The commission’s spokesperson, Obert Gutu, on June 21, 2021, kicked up a storm when he appeared to downplay the Gukurahundi issue, saying it is a “small, tiny fraction” of the cases the commission is handling.

Dzikamai Bere, director of the Zimbabwe Human Rights NGO Forum, said the government had compromised the commission to deal with the Gukurahundi issue.

“Sadly, the government has not shown sincerity in addressing the matter,” Bere told Zenger News.

“There are two levels of concern: the first is the institution which the Constitution created to address these issues—the National Peace and Reconciliation Commission—has not done so for various reasons.”

“The previous commissioners were not empowered to make an impact in their work, and the Zimbabwe National Union-Patriotic Front has appointed the new group of commissioners. As a result, the commission is severely compromised and has already lost the people’s confidence to address the Gukurahundi issue.”

Bere said only an independent tribunal led by the victims is capable of dealing with the matter.

Former Minister of Information and Publicity during the Mugabe-era, Jonathan Moyo, said mass graves had been identified in Matabeleland and that some victims were thrown into disused mines.

On May 25, 2021, activists erected plaques to remember the victims in Bhalagwe, Matabeleland South, and Silobela, Midlands.

However, the plaques were stolen with Ibetshu Likazulu, a Bulawayo-based pressure group leading the commemoration for the victims since the 1980s, pointing fingers at state security agents.