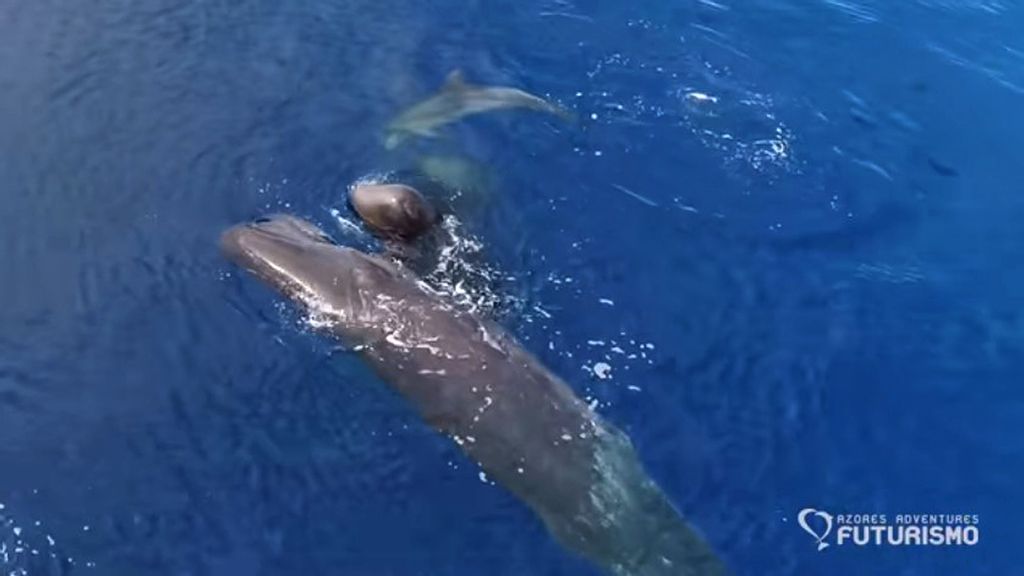 Bottlenose dolphins have been spotted and filmed swimming alongside a family of sperm whales in the North Atlantic Ocean.

The incredible footage was taken near Sao Miguel Island in Portugal’s Azores archipelago in late June, during a whale-watching trip led by the Futurismo Azores Adventures tour operator.

In the video, a pod of gray bottlenose dolphins can be seen gliding through the water together with a pod of sperm whales, creating an interspecies relation between the two groups.

The company wrote on Facebook on July 2: “These sperm whales are in the company of some bottlenose dolphins. Can you spot them?”

“This tranquil family was seen in last week’s tour. It is not the first time we see this behavior between species at all.”

Under the video, which was viewed thousands of times, Facebook user Marcos Santos asked, “Is this type of interspecies socialization common among sperm whales and dolphins?

“I’ve seen videos between other species of cetaceans, but not between sperm whales and dolphins.

“And secondly, I would like to know if it is possible for them to understand each other. Since, in this case, both sperm whales and dolphins use clicks to communicate, amongst other things.”

“We spoke with our biologists, and they told us that it is not very common, but seeing socialization between species happens sometimes,” the company replied.

“When we observe, we can see physical interaction and body language between them. It’s probably acoustic communication, as sometimes happens between people with different languages,” the company continued.

Bottlenose dolphins’ social behavior includes “breeding, playing, aggression, and gentle body contact,” as well as hunting together in pods, according to the National Oceanic and Atmospheric Administration. The dolphins are also described as “a highly intelligent species” which can “use sound both for communication and to hunt for food.”

Dolphins use echolocation and hear at higher frequencies than whales, which communicate at far longer distances with lower tones. This limits the abilities of the two species interacting through sound.