Otters are part of the weasel family and known as strong swimmers.
By Georgina Jadikovskaall July 9, 2021
Facebook
Twitter
Linkedin
Email 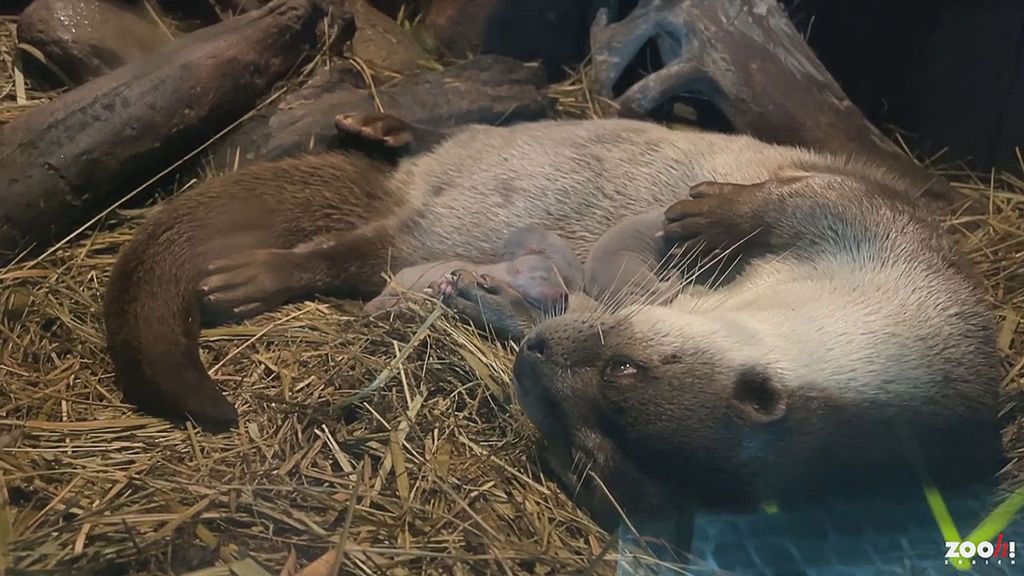 This video shows mother Lulu resting with her three newborn otter pups at a zoo in Switzerland.

Mother Lulu, who moved to the Zurich Zoo from Rotterdam in the Netherlands in 2012, gave birth to the three offspring on July 5.

The zoo reported the young pups will be spending the next few weeks with their mother, who has lived in the same enclosure with her partner, Tom, since 2018.

According to reports, Tom was born in the wild and was brought to the zoo to ensure a genetically varied increase in the otter population in European zoos.

Female otters usually deliver two to three offspring after a gestation period of 61 to 63 days. The pups are blind and about 18 inches long at birth.

They start seeing when they are between four and five weeks old and begin ingesting solid food about two to three weeks later.

The young become independent at the age of one year.

Fish account for 70 percent of their diet, but otters can also feed on amphibians, crabs, mussels, birds, small mammals and insects. The otter is an opportunist that eats whatever is most common and easiest to hunt.

Sea otters are an endangered marine mammal and are protected in Switzerland. The fur trade, shark attacks, habitat destruction and oil spills account for their decreasing population.

Newborns are of great importance for the zoo and the EAZA Ex-situ Programme, formerly known as the European Endangered Species Programme, as otters were considered extinct in the alpine country in the 1980s. An increasing number that migrate through rivers in France and Austria have been spotted in Switzerland since 2009.

A collaboration between the Zurich Zoo and the Pro Lutra Foundation in Pontresina, Switzerland, aims to secure and increase the country’s otter population.

The foundation hopes to ecologically upgrade otter habitats, such as alluvial forests, as well as river and lake banks, in order to positively influence the return of the species in the country.

Otters are part of the weasel family and known as strong swimmers, spending most of the time in water. They can stay underwater for five to eight minutes, depending on the species, as their heart rate slows, and they require less oxygen.

Only two continents don’t have otters: Australia and Antarctica. Most otters are social; groups are comprised of a mother and her offspring. Males spend most of their time with other males or alone.