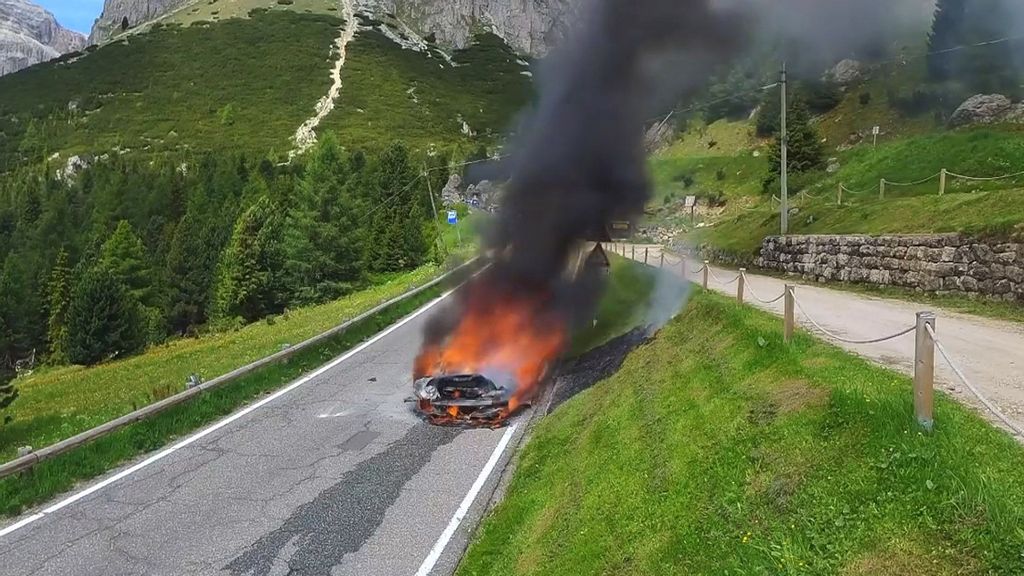 A tourist was driving a McLaren through the Pordoi Pass in the Dolomites when it caught fire and was quickly destroyed. (@hotelpordoi/Zenger)

Talk about burning rubber (and more): A luxury McLaren supercar was reduced to a pile of ashes on an Italian mountain road.

The McLaren sports car caught fire on the Pordoi Pass in the Italian Dolomites. The video was posted on the Instagram page of the Pordoi Hotel, near where the July 4 incident took place.

“They were a group of Finns,” a hotel worker who saw the conflagration said. “There must have been 10 people with five beautiful cars.”

The driver of the McLaren, a car estimated to sell for about $200,000, had just been driven through the Pordoi Pass, a complex mountain road with hairpin bends, when the incident took place.

According to reports, the road was tough on the sports car’s engine.  “The car was right below our hotel when it started smoking,” the hotel worker said. “The driver calmly got out as the car slowly started to catch on fire.”

The driver — who was apparently alone in the car and whose identity was not immediately known — was visibly shaken by the unexpected blaze. Despite that, he went into the hotel to ask for a fire extinguisher and made a futile attempt to stop the blaze.

“By this time, the car was already half-burned, so the fire extinguisher could do very little,” the worker said. “This is why we called the fire brigade and the police to block the road, because many people were passing by even though the car was on fire.”

During the blaze, the car’s airbags popped from the heat, creating a lot of sparks.

The hotel worker said firefighters and the police responded quickly to the incident. Firefighters were able to extinguish the blazing car in about 15 minutes, but the vehicle was already burned to a crisp.

The hotel then used its bulldozer, which it uses to clear snow in the winter, to move the burned remains of the luxury vehicle off the road. The specific McLaren model that was destroyed in the blaze was not immediately available.

McLaren Automotive (formerly known as McLaren Cars) is a car manufacturer based in Woking, England. The company’s main products are luxury supercars, which it produces in-house.

The company’s founder is legendary race car driver/designer Bruce McLaren, who “entered his first race in 1952 as a 15-year-old schoolboy,” according to the McLaren website. “He won his first grand prix just seven years later. He then formed a racing team that remains the only one to have achieved motorsport’s Triple Crown (winning the Formula 1 title, the Indianapolis 500 and the 24 Hours of Le Mans).”