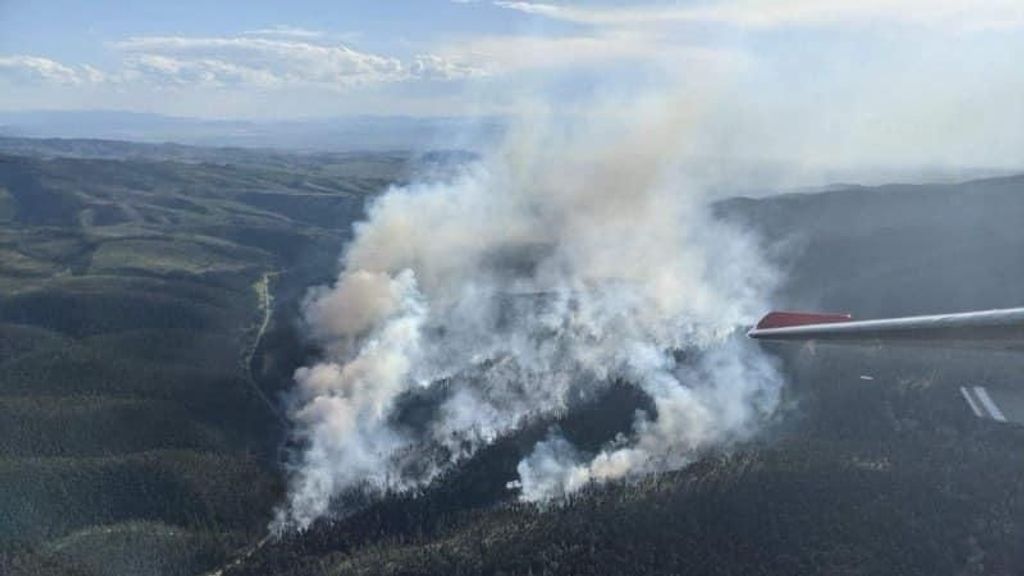 The Ellis Fire near the Smith River in Montana ignited this week and quickly grew to cover 75 acres. (Inciweb/National Wildfire Coordinating Group)

The Republican governor of wildfire-hit Montana has accused President Joseph R. Biden’s administration of putting lives at risk by letting fires burn and not thinning out forests through logging.

Gov. Greg Gianforte wrote to the National Parks Service accusing it of being “unwilling to commit to an aggressive initial response to wildfires” on its lands.

The federal government owns 27 million acres in Montana — 29 percent of its total land — with 1.2 million acres cared for by the park service.

Montana has faced severe drought conditions and a record-breaking heat wave which caused its wildfire season to begin earlier than normal with six fires in June.

After extinguishing three in late June, seven fires are active as of July 9, burning a collective 38,915 acres.

In mid-June, when all six fires were burning, Gianforte sent a letter to Shawn Benge, deputy director of the U.S. National Parks Service accusing the agency of letting fires burn.

“I hope we can reach a resolution in which all fires on NPS lands in Montana, aside from those that are critical to maintaining a healthy ecosystem, will receive an aggressive initial response,” Gianforte wrote. “The safety and wellbeing of firefighters and of surrounding communities depend on it.

“As you know, wildfires don’t recognize borders and cease burning where federal lands end and other lands begin.”

The National Parks Service, however, rejects claims it has not been aggressive enough.

“With public and firefighter safety as our first priority, the National Park Service responds to and manages all wildfires in parks to protect the public, communities and infrastructure, conserve natural and cultural resources, and restore and maintain ecological integrity,” Marco De Leon, a spokesperson for the National Park Service, told Zenger. “In collaboration with state, local and federal partners, each fire is evaluated to determine the best management approach based on what values are threatened, the current environmental conditions, resource availability, risk exposure to those resources, and the potential impacts the fire could have.”

Elected last November, Gianforte is in his first four-year term as governor. He is Montana’s first Republican governor since 2005. (He previously served two terms as the state’s sole member of the House of Representatives.)

His letter reveals a split over how to prevent wildfires, which have been increasing in number and scale in the West, and particularly in California.

But critics say that is not enough and ineffective in the long term and advocate for “disaster mitigation,” which includes the impact of fires on communities through land planning and encouraging homeowners to assume some fire prevention responsibilities themselves.

Biden’s budget includes a plan for spending $50 billion on “disaster mitigation,” putting him and Gianforte at odds.

Gianforte doubled down on his view that the federal government is taking the wrong approach in a letter to Biden on June 30, who was meeting with the governors of a group of eight Western states that day.

The group did not include Montana to discuss wildfires. Gianforte co-wrote the letter to Biden with Idaho Gov. Brad Little, also a Republican and also not present at the president’s meeting.

“As the summer continues, our states will work diligently to extinguish wildfires as quickly and prudently as possible to prevent the loss of life and property while continuing to address the land management practices that set the stage for the health of our landscape,” Gianforte and Little wrote. “We will continue to work toward effective, active land management, and we hope you will join us.”

Gianforte has been facing wildfires since June 12 and declared a state of energy emergency in Montana on June 15, with an executive order lifting “hours of service” restrictions on trucks carrying aviation fuel to firefighting aircraft.

Zenger has learned he did so after a long-time friend contacted his personal cellphone number to raise concerns that planes could not take off to drop retardant. Representatives from Gianforte’s office declined to comment.

Critics of Gianforte’s wildfire approach say relying solely on measures such as logging and thinning is not enough to protect communities from the loss of life and property, and only stores up problems for the future.

Kimiko Barrett, the lead wildfire researcher at Headwater Economics, an independent, nonprofit research agency, said a more effective wildfire response requires better land-use planning and a focus on steps individual homeowners can take to increase the likelihood of their home surviving a fire.

Politicians need to start thinking more deliberately about the human element and strategically consider how, where and under what conditions homes are built in wildfire-prone areas, Barrett said.

“[Gianforte’s] prioritization of initial attack and suppression intensifies wildfires down the road,” Barrett said. “He’s very much focused on forest management, and with current development trends in Montana, there is little incentive for him to change his regulatory approach.”

While “initial attack,” or fire-fighter response, has been successful at containing and extinguishing 98% of all wildfires, Barrett said, it’s the two percent that escapes initial attack that often leads to wildfire disasters.

Suppressing wildfires also intensifies future wildfires because it allows fuel to build up over time, leading to bigger fires that are harder to contain. Researchers have dubbed this pattern the “wildfire paradox.”

Gianforte has also spoken out against what he called “frivolous lawsuits” from environmental groups that delay logging projects in the past. As a U.S. Representative during former President Donald J. Trump’s term, he met with Trump’s secretaries for the Departments of Agriculture and the Interior who also expressed support for increased logging and thinning efforts.

“It’s about using all the tools available in the appropriate situation,” Frampton said. “The DNCR works in concert with all other fire suppression agencies to respond to fire.”

Although Biden’s wildfire plan includes a 62 percent increase for “forest management,” meaning logging and controlled burns, in next year’s budget, from $328.4 million to $532 million, it’s coupled with other prevention strategies.

Those include $50 billion from the bipartisan infrastructure framework — which has yet to be passed — for disaster mitigation projects, and plans to transition to a permanent firefighting workforce from the current seasonal system.

Facing a similarly severe wildfire season last year, then-president Donald J. Trump promoted forest management as the solution, calling on California to “clean your floors” at a rally, making him the most high-profile advocate of “active management.”