Latest Marvel offering is a notch above the norm, but nothing sensational.
By Jacob Smith July 9, 2021
Facebook
Twitter
Linkedin
Email 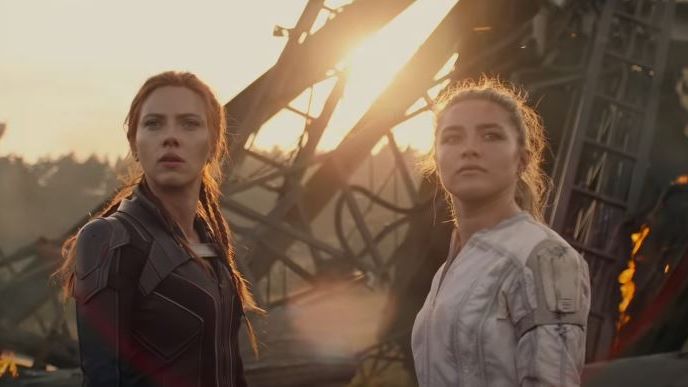 Two years ago, Marvel released “Avengers: Endgame,” a film that felt like the true conclusion of a cinematic universe that has stretched out over 23 films in 13 years. The only problem was that Disney has no plans on stopping the creation of nine-figure CGI superhero films. As a matter of fact, the company has committed to at least 10 more films over the next 4 years. But have audiences had enough of comic books and spandex?

Disney was hoping to get an answer with the release of “Black Widow,” a movie that comic book fans had waited 10 years for. It was poised for a May 2020 release before COVID-19. Now that theaters are back up and running, the feeling is that people are ready to get out of the house and pack movie theaters for round 25 of the comic book hoedown.

Actress Scarlett Johannson has been involved with the so-called Marvel Cinematic Universe since 2010’s “IronMan 2,” but her first solo movie comes over a decade later, following the demise of her Natasha Romanoff character in “Avengers: Endgame.” Given that, is it too late for “Black Widow” to make an impact in the MCU?

The Story: In a story that takes place after the events of “Captain America: Civil War,” Romanoff is on the run after being found in violation of the Sokovia Accords. Forced into exile, she is thrown in the middle of a global conspiracy with direct ties to her past.

Romanoff reunites with her sister-figure Yelena Belova (Florence Pugh), who needs Romanoff’s help bringing down the Red Room, a secret organization of female assassins that their mother Melina Vostokoff (Rachel Weisz) and father Alexei Shostakov (David Harbour) worked with for many years. Their mission reconnects their “family” for the first time in 20 years, and now Romanoff must mend the fences of her past to save the lives of many young girls of the future.

Bright Spots: Johannson may be the main attraction of this film, but Florence Pugh is the true star of “Black Widow.” In what may be her breakout performance, Pugh overcomes the character limitations of being a Black Widow clone and becomes the person with the most heart and best-written character progression in the movie. Pugh’s performance almost wins her enough interest to be brought back into the MCU if Disney decides to move forward with the character.

The opening act of this movie tells a strong story of Natasha and Yelena’s traumatic childhood in the mid-’90s. This is by far the strongest portion of the film, as it feels original and different from the universe it inhabits. The movie has a strong message against the human trafficking of young girls. The grounded message of the film puts it close in comparison to earlier Captain America movies such as 2014’s “Winter Soldier.”

Weak Spots: The biggest problem with the Marvel Cinematic Universe is that the overwhelming majority of its 23 films are just plain mediocre. Not good enough to be great and not bad enough to be terrible, just completely safe and down the middle. “Black Widow ” is better than the standard superhero film Disney has to offer, but it has its faults.

The film has heavy-handed moments that make some bigger twists it offers downright predictable, given the huge amount of foreshadowing. Observant viewers can figure out the big plot twist within the first 20 minutes of the film. In addition, Johansson doesn’t offer anything different from what we have seen in other MCU films outside a return of her red hair.

Shortfalls in the writing can be traced back to production issues that saw screenwriter Ned Benson come in to rewrite the script just one year after hiring Jac Schaeffer to create the screenplay. Like most MCU films, “Black Widow” has the annoying habit of undercutting any meaningful dramatic moments by inserting misplaced comedy bits. As much as this film wants to separate itself from its predecessors, “Black Widow” goes through the same studio formula of all MCU films, which is to make money, not to stand out.

The Takeaway: In the grand scheme of things, “Black Widow” mainly serves as final goodbye for Johansson’s 10-year run in the series. The movie is in the same category as most MCU movies: A big-budget popcorn flick that offers a solid but not sensational movie-going experience.

See or Skip: “Black Widow” is one of the better narrative films the Marvel has produced and a good choice for those looking for quality entertainment.

A previous version of this story misnamed Florence Pugh in photo captions. Her name is Florence, not Frances. Zenger regrets this error.