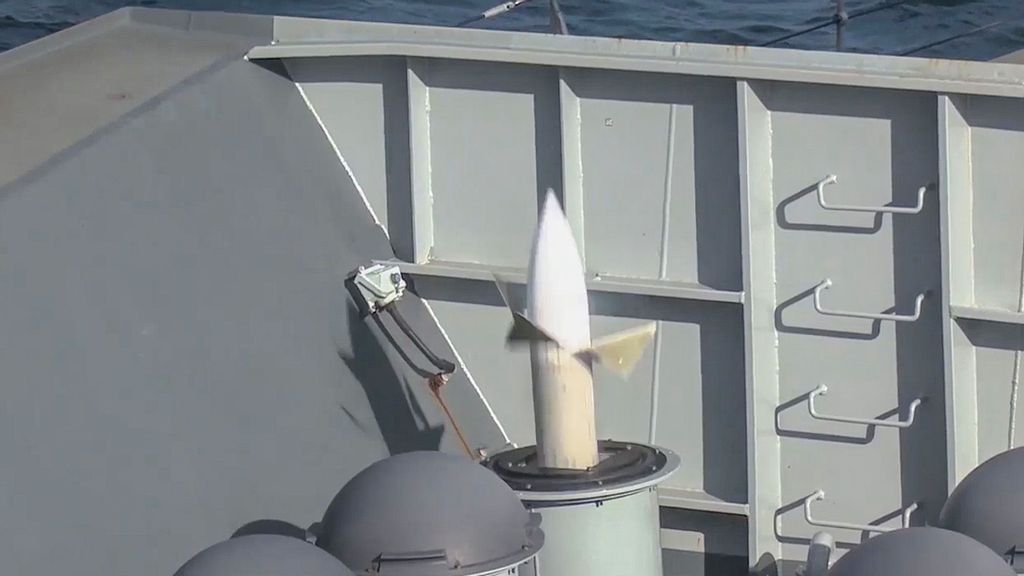 The firepower of the UK Royal Navy's destroyers are being enhanced with Sea Ceptor missiles, one of which is shown here coming out of its silo at the start of a test flight. (@royalnavy/Zenger)

The British navy has released test footage of the Sea Ceptor missile system that it plans to install on six destroyers, showing the weapons being fired from a silo on the frigate HMS Montrose

The new missile system will deploy on the HMS Daring, Dauntless, Dragon, Diamond, Defender and Duncan in a $688 million deal with MBDA Missile Systems, a joint venture of three leading European aerospace and defense companies.

Airbus, BAE Systems and Leonardo all have major stakes in the venture, which is based in Le Plissis Robinson, France.

“The weapon — fitted across the Type 23 frigate flotilla — bolsters the destroyers’ ability to deal with medium-range air and missile attacks, and destroy fast-moving attack boats,” the Royal Navy said. “As part of the contract the Portsmouth-based ships will also receive an upgrade to their Sea Viper missile system.”

With a maximum cruising speed of Mach 3, three times the speed of sound, the Sea Ceptor would be only half as fast as Russia’s Zircon missile, a system under development that is reported to have a top speed of between Mach 6 and Mach 8.

Sea Ceptor is already in service on all 13 of the Royal Navy’s “Type 23” frigates, and will also be fitted on their successors, the Type 26 and 31 classes under construction.

The first Sea Ceptor-enhanced destroyer is expected to be delivered by summer 2026, with the entire flotilla completed by winter 2032.

MBDA describes the Sea Ceptor as an all-weather air-defense system that can fire quickly “against multiple simultaneous targets.”

Its vertical launches are “soft,” meaning that they provide enemy satellites with a minimum launch signature to spot from high above Earth. Vertical launches give the Sea Ceptor the ability to fire in any direction, 360 degrees around its release point. And the missile itself is compact, allowing multiple weapons to fit in limited spaces.

The company said the Sea Ceptor is just one part of the arsenal it makes available to governments around the world.

“MBDA is closely associated with Exocet, probably one of the world’s most famous anti-ship missile systems,” the company says. “However, this is only one of a number of ship-based, fixed and rotary wing aircraft launched anti-ship missiles that MBDA supplies to the modern navy.”