Popcorn With Zenger: Chris Pratt’s ‘The Tomorrow War’ Is Confusing And Nonsensical

The only hope for mankind's survival is sending soldiers and civilians from now into the future, but the result is a garbled mess.
By Jacob Smith July 8, 2021
Facebook
Twitter
Linkedin
Email 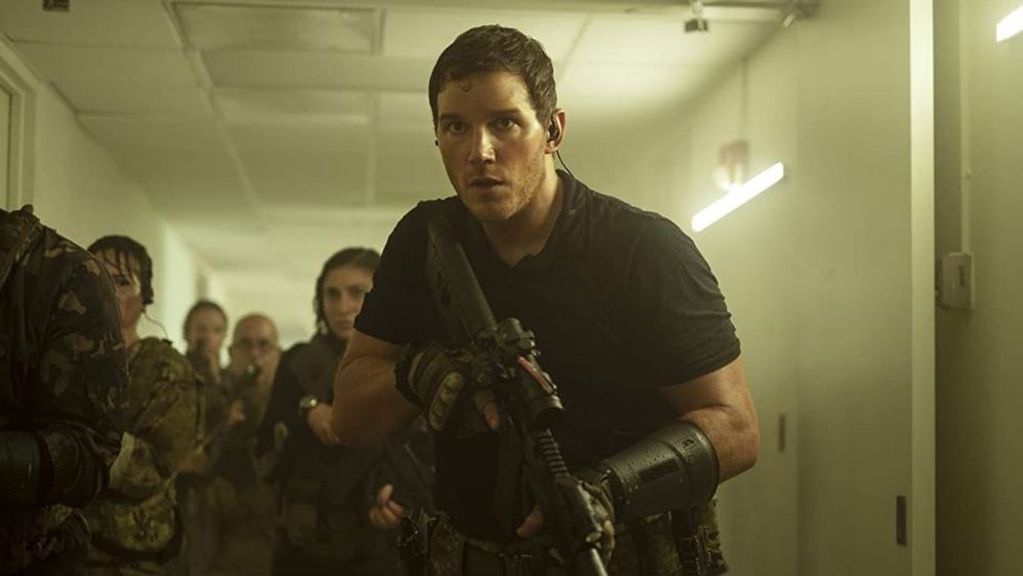 Chris Pratt is the key to humanity's survival in “The Tomorrow War.” (Amazon Studios)

Who would have thought dropping a bunch of untrained middle-aged civilians onto a battlefield to fight monsters would be a bad strategy for winning a war?

As the film industry begins to regain its footing after COVID-19 delays, Hollywood studios are still struggling to figure out what to do with films from their 2020 release schedule in order to avoid massive losses.

Amazon Prime’s “The Tomorrow War” was produced by Paramount Pictures, but forced to reschedule its release twice due to theater closures. In January, Amazon Studios bought the rights to the movie for $200 million, taking Paramount off the hook and giving Amazon more content for its streaming service.

It’s rare to see actors of the Marvel cinematic universe outside their Disney-controlled confines, but Chris Pratt has attached himself to some major tent-pole films such as “Jurassic Park” and “The Lego Movie.” His latest, “The Tomorrow War” has all the ambition to be the next breakout sci-fi hit, but none of the execution.

The Story: “The Tomorrow War” begins near the present day, when soldiers from 30 years in the future warn humanity about a war against alien forces that threatens to wipe out the human race. The alien invaders known as the “Whitespikes” appear 26 years in the future and nobody knows where they came from.

Former Green Beret Dan Forester (Pratt) is drafted to fight a war about which he has little information other than that humanity is on the brink of defeat. Dan is sent to future Miami Beach with a group of civilians, and when they arrive, they discover that the male aliens are attacking everything in sight in order to defend the female from attack. The future military is close to finding a toxin that can kill the aliens, but the female is immune to the poison. Dan and the future soldiers must bring back a shred of hope to the disheveled present or risk being doomed by a bleak future.

Bright Spots: Despite its streaming release, the original big-budget production is clear as day, creating impressive futuristic set pieces. The cast includes a strong collection of actors including Betty Gilpin as Dan’s wife and J. K. Simmons as Dan’s estranged father. The best character work in the movie comes from the subplot between Pratt and Yvonne Strahovski (Col. Muri Forester), who provide the only strong emotional connection “Tomorrow War” has to offer, though the time the two have together is criminally short.

“The Tomorrow War” introduces many intriguing elements that could have created a lasting story, but fails to execute on almost all of them.

Weak Spots: Some films require you to turn your brain off in order to enjoy the plot, but “The Tomorrow War” requires you to remove your brain for repairs in order to get through the first act. The pacing matches a honey badger on meth as the film unloads a dump truck of exposition just to explain why we are sending middle-aged non-combatants to the future to fight a war for humanity in the first place.

Pacing issues are only matched by the complete mess of a narrative, as the plot feels like four films in one. It begins with a CliffsNotes version of the premise. Then, we are dumped into a post-apocalyptic world with little context but lots of bullets. Next, it becomes a science-based thriller as the characters look for a magic toxin to win a future war. Finally, just when you think the film has ended, you are thrown into a third act that becomes its own separate movie and concludes with the realization that the first two hours of the film were only there to justify one plot point to move the story into the finale.

Pratt is the only character given enough screen time for any sort of development. When we get a glimpse of character progression from anyone else, they either die or are removed from the film for an hour with no explanation. Finally, there is no reason for the 138-minute runtime with the amount of filler stuffed into the plot. Poor editing and poor story structure prevent “The Tomorrow War” from being anything more than a one-time viewing.

The Takeaway: Anytime there is time travel in movies, you can guarantee that the plot is going to be a mess, and “The Tomorrow War” is no exception. Pratt tries his best to carry the film, but it’s not enough to bring this wannabe sci-fi blockbuster to the level of subpar.

See or Skip: Even hardcore Pratt fans are likely to be disappointed in the mediocrity of “The Tomorrow War.”