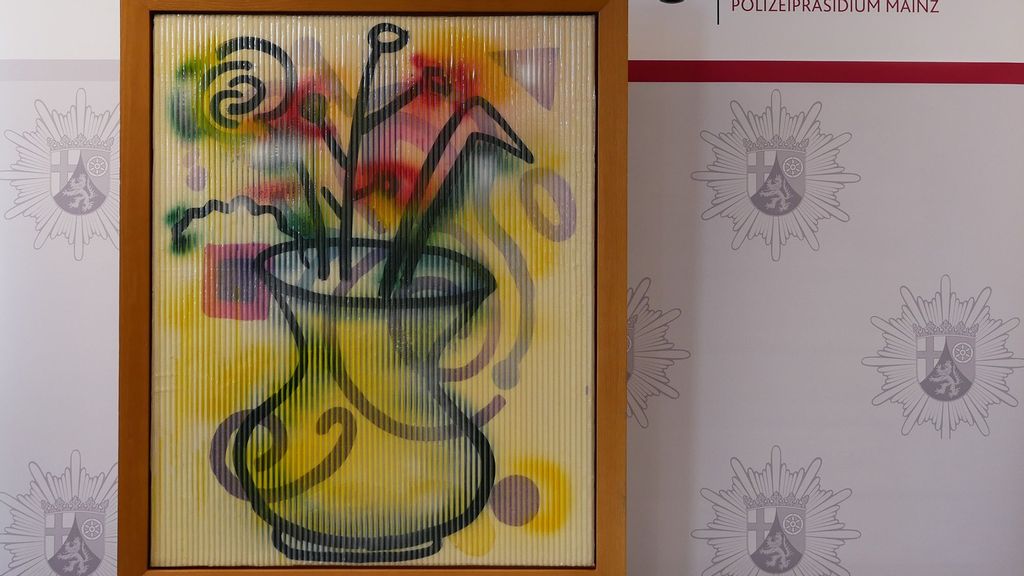 Vasen Linsenbild by Sigmar Polke was found in a private residence in Mainz, Germany, after police were notified of attempts to sell the painting. (Polizeiprasidium Mainz/Zenger)

A long-lost painting by German artist Sigmar Polke worth around $590,000 has been recovered by police from an apartment in Germany after it was stolen and offered for sale. Polke was an experimental artist who used non-traditional materials — like meteorite dust — to produce unusual effects.

Police seized the painting, which disappeared from a gallery after Polke’s death in 2010, from a private residence in Mainz.

“In November 2020 the criminal police in Mainz received a reference to an offer to sell the painting [“Vasen Linsenbild”],” police said in a statement. An investigation led police to two men ages 43 and 48, and a woman age 39.

The painting was recovered after the District Court in Mainz issued a search warrant of a private home on May 26.

The 44 x 36-inch painting, “Vasen Linsenbild” (“Flowers in a Vase”), was verified by artists from the German Federal Criminal Police Office.

“The current market value of the painting is estimated at a mid-range six-figure sum,” police said.

Polke is widely considered to be one of the most influential artists of the post-war era. The current auction record for Polke of $27 million, was set in May 2015 at Sotheby’s for “Dschungel” (“Jungle”).

Polke’s work was praised during his lifetime: He won the Golden Lion prize at the Venice Biennale in 1986. His works are included in collections of the Art Institute of Chicago, the Museum of Modern Art in New York, the Tate Gallery in London, the Kunstmuseum Bonn, and the J. Paul Getty Museum in Los Angeles.

He traveled the world and experimented with psychedelic drugs in an effort to capture the sense of alternative vision in his work. For 14 years Polke taught at the Hamburg Academy of Fine Arts. He almost never granted interviews, and he rarely wrote or spoke about the meaning of his art, according to the art dealer Ideel Art.

In the 1970s Polke chose photography, but returned to paint in the 1980s, when he produced abstract works created by chance through reactions between paint and other chemicals. He produced history-themed paintings during the last 20 years of his life.

Other paintings that disappeared from Polke’s collection in 2010 have never been located.

The most costly art heist in Germany’s history is also likely the biggest in Europe since World War II. Police arrested two brothers in 2020 for the theft a year earlier of 111 pieces of jewelry from a museum in Dresden.

Those pieces, covered in diamonds, rubies and emeralds, are officially considered priceless but the gemstones would have brought hundreds of millions of euros on the open market if they were broken up. The jewelry, which included a 49-carat white diamond, has not been recovered.